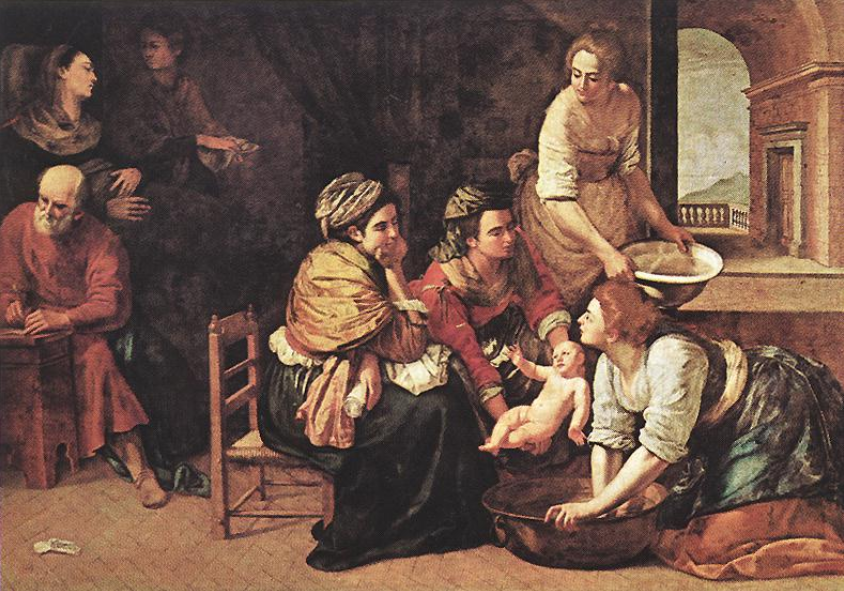 Editor’s note:  The following comprises the second chapter, fourth part, of The Gospel of Luke: An Exposition, by Charles R. Erdman (published 1936).  All spelling in the original.

D. The Birth of John, and the “Benedictus” (Luke 1:57-80)
_____________________________________________________________________________
57 Now Elisabeth’s time was fulfilled that she should be delivered; and she brought forth a son. 58 And her neighbors and her kinsfolk heard that the Lord had magnified his mercy towards her; and they rejoiced with her. 59 And it came to pass on the eighth day, that they came to circumcise the child; and they would have called him Zacharias, after the name of his father. 60 And his mother answered and said, Not so; but he shall be called John. 61 And they said unto her, There is none of thy kindred that is called by this name. 62 And they made signs to his father, what he would have him called. 63 And he asked for a writing tablet, and wrote, saying, His name is John. And they marvelled all. 64 And his mouth was opened immediately, and his tongue loosed, and he spake, blessing God. 65 And fear came on all that dwelt round about them: and all these sayings were noised abroad throughout all the hill country of Judæa. 66 And all that heard them laid them up in their heart, saying, What then shall this child be? For the hand of the Lord was with him.
67 And his father Zacharias was filled with the Holy Spirit, and prophesied, saying,

68 Blessed be the Lord, the God of Israel;

For he hath visited and wrought redemption for his people,

69 And hath raised up a horn of salvation for us

In the house of his servant David

70 (As he spake by the mouth of his holy prophets that have been from of old),

71 Salvation from our enemies, and from the hand of all that hate us;

72 To show mercy towards our fathers,

And to remember his holy covenant;

73 The oath which he sware unto Abraham our father,

Should serve him without fear,

75 In holiness and righteousness before him all our days.

76 Yea and thou, child, shalt be called the prophet of the Most High:

For thou shalt go before the face of the Lord to make ready his ways;

77 To give knowledge of salvation unto his people

In the remission of their sins,

78 Because of the tender mercy of our God,

Whereby the dayspring from on high shall visit us,

79 To shine upon them that sit in darkness and the shadow of death;

To guide our feet into the way of peace.

80 And the child grew, and waxed strong in spirit, and was in the deserts till the day of his showing unto Israel.
_____________________________________________________________________________
When the aged priest, Zacharias, had received from an angel the promise that he was to be given a son who would be called John and who would be the herald of Christ, and when he had asked for a sign to attest the truth of the prediction, he was smitten with dumbness as a rebuke for his unbelief and as a stimulus for his faith. Even when at last the promise was fulfilled, the sign was not removed and he was not able to speak until he had given a written expression of his confidence in God. This interesting incident occurred on the eighth day after the birth of John, when in the presence of their rejoicing friends the parents were about to name the child. Many supposed that the name of the father would be selected. The mother, however, intimated that the name might be “John.” When Zacharias, the father, was consulted, “he asked for a writing tablet, and wrote, … His name is John.” There was no hesitation, no uncertainty, no question in his mind, for this name had been predicted by the angel, and Zacharias showed by his decision and firmness that he believed absolutely in the fulfillment of all that the angel had promised concerning the career of the son who was to be regarded by his fellow men as a gift of divine grace and a prophet of divine appointment. It usually happens that a public confession of faith results in new joy and in wider testimony. It was surely so in the case of Zacharias: “His mouth was opened immediately, … and he spake, blessing God.” His thanksgiving was voiced in a hymn which, for hundreds of years, has been sung daily in Christian worship. It is indeed a Christian hymn and a hymn of the nativity; for while its occasion was the birth of John, only one stanza refers to that event; the whole burden of the thanksgiving refers to the approaching birth of Jesus and to the salvation which he is to bring.
This hymn is named the Benedictus from the first word in the Latin version. It is an ecstatic expression of gratitude to God for his boundless goodness. The poem possibly may be divided into five stanzas of four lines each; but there is a definite pause after the third of these stanzas when the thought turns from the work of Christ to the specific mission of John.
The first strophe, vs. 68, 69, speaks of the redemption of Israel as already accomplished in the gift of the Christ who is about to be born and who is described as “a horn of salvation,” that is, a manifestation of saving power. He is to appear as a son and heir of David the king.
The second stanza, or strophe, vs. 70-72, indicates that the salvation from all enemies is in fulfillment of the promises made through the prophets and cherished by the ancient fathers and embodied in the holy covenant made with Israel of old.
The third stanza, vs. 73-75, describes the nature of this salvation which was assured by the oath to Abraham; it is to be such a deliverance from political oppression as to make possible for Israel a true, priestly service of God, as a nation holy and righteous before him.
In the fourth stanza, vs. 76, 77, the singer turns to address his own son whose birth has given occasion to the song. He declares that John is to be recognized as a prophet of God whose divine mission will be to announce and to define the promised salvation as in its essence not a political but a spiritual redemption consisting in the remission of sin. John was not to be a revolutionist but a reformer. He was to call a nation to repentance that those who obeyed his message might be ready to receive the salvation of Christ.
This mission of John is linked with that of Christ as the description of the latter reaches its climax in the closing strophe. Vs. 78, 79. The source of all the blessings Christ will bring is found in “the tender mercy of our God;” the essence is a visitation of “the dayspring from on high,” when the Sun of righteousness arises upon the helpless, terrified wanderers of the night who are seated “in darkness and the shadow of death;” the result will be “to guide our feet into the way of peace.”
Such is the hymn of Zacharias, a hymn of faith, of hope, of gratitude, a song of the salvation provided by the love of God in Jesus Christ our Lord.
(Go back to previous chapter)
(Continue to next chapter)

Hymn: Angels We Have Heard on High