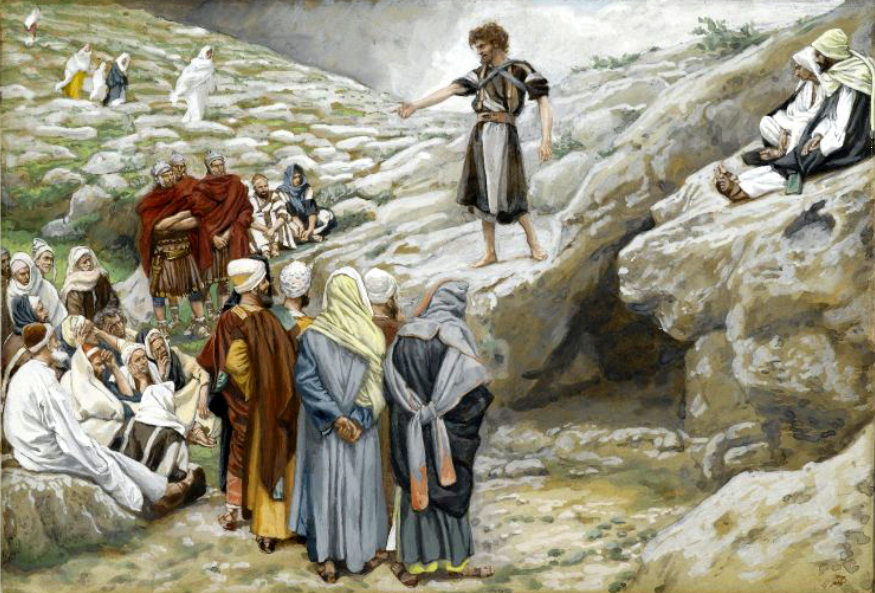 Editor’s note:  The following comprises the third chapter, first part, of The Gospel of Luke: An Exposition, by Charles R. Erdman (published 1936).  All spelling in the original.

The voice of one crying in the wilderness,

Make ye ready the way of the Lord,

5 Every valley shall be filled,

And every mountain and hill shall be brought low;

And the crooked shall become straight,

And the rough ways smooth;

6 And all flesh shall see the salvation of God.

7 He said therefore to the multitudes that went out to be baptized of him, Ye offspring of vipers, who warned you to flee from the wrath to come? 8 Bring forth therefore fruits worthy of repentance, and begin not to say within yourselves, We have Abraham to our father: for I say unto you, that God is able of these stones to raise up children unto Abraham. 9 And even now the axe also lieth at the root of the trees: every tree therefore that bringeth not forth good fruit is hewn down, and cast into the fire. 10 And the multitudes asked him, saying, What then must we do? 11 And he answered and said unto them, He that hath two coats, let him impart to him that hath none; and he that hath food, let him do likewise. 12 And there came also publicans to be baptized, and they said unto him, Teacher, what must we do? 13 And he said unto them, Extort no more than that which is appointed you. 14 And soldiers also asked him, saying, And we, what must we do? And he said unto them, Extort from no man by violence, neither accuse any one wrongfully; and be content with your wages.
15 And as the people were in expectation, and all men reasoned in their hearts concerning John, whether haply he were the Christ; 16 John answered, saying unto them all, I indeed baptize you with water; but there cometh he that is mightier than I, the latchet of whose shoes I am not worthy to unloose: he shall baptize you in the Holy Spirit and in fire: 17 whose fan is in his hand, thoroughly to cleanse his threshing-floor, and to gather the wheat into his garner; but the chaff he will burn up with unquenchable fire.
18 With many other exhortations therefore preached he good tidings unto the people; 19 but Herod the tetrarch, being reproved by him for Herodias his brother’s wife, and for all the evil things which Herod had done, 20 added this also to them all, that he shut up John in prison.
______________________________________________________________________

John the Baptist was the first inspired prophet to break the silence of the centuries which had elapsed since the days of Malachi. The importance of his ministry is indicated by Luke in the minute exactness with which he fixes its date. By naming the civil and religious rulers he gives a sixfold designation of the time; then, too, it accords with the universal aspect of his Gospel, and with the genius of Luke as a historian, to link his story with secular events. Naturally he mentions first the reigning emperor, Tiberius Cæsar; he next names Pilate, the governor of Judea who attained an immortality of shame for condemning Jesus to the cross; Herod Antipas, a seducer and murderer, son of Herod the Great, is designated as ruler of Galilee; Philip and Lysanias are said to be governing neighboring provinces; as ecclesiastical rulers, Annas and Caiaphas are mentioned; while the former had been deposed some years before, he continued to share with his son-in-law the actual duties of the high priesthood, and he also shared the infamy in which their names are united. Such a list of leading spirits indicates the absolute moral and religious degeneracy of the times and the need of some one to call Israel back to the service and worship of God.
Such a messenger appeared in the person of John the Baptist who after his long discipline in the wilderness came with a definite message from God and drew out great throngs to the Jordan Valley to attend his preaching and to accept his baptism as a sign and seal of their repentance. The nature of his ministry is declared to have been a fulfillment of the prediction of Isaiah who described “one crying in the wilderness,” one sent of God to prepare the way for the coming of Christ. This preparation is pictured in terms of Oriental imagery. When a monarch was about to make a journey, a servant was sent before him to prepare the highway. Valleys needed to be filled, hills lowered, crooked places made straight, rough ways made smooth. Thus, before men would be ready to receive Christ, moral obstacles must be removed; men must repent of their sins and turn from them. Luke closes his quotation from Isaiah with the line, “And all flesh shall see the salvation of God,” which is in accord with the universal character of his Gospel.
The burden of the message preached by John was that which in all ages has awakened a response in the hearts of men: he preached sin and judgment, repentance and pardon. The tone of his message as recorded by Luke, however, was particularly severe; here he is said to have addressed the multitudes as the “offspring of vipers” and to have asked them why they were pretending to have heard a warning of wrath to come. The reason for such severity was that, while wishing to escape the impending judgment, the people were unwilling to forsake their sins. They regarded the baptism of John as a magical rite which could make impenitent men safe in the hour of judgment. John bade them show their repentance by their works and not to trust in their descent from Abraham as securing their salvation. He declared that judgment was upon them; the ax was already lying at the root of the trees and every fruitless tree was about to be “hewn down, and cast into the fire.”
To the question of the people John made it perfectly plain that by repentance he meant no mere form or ceremony, nor was the word merely an abstract theological term; the thing he demanded was plain and practical, that each man should turn from his besetting sin and should show love to his fellow man. Clothing and food were to be given to those in need, for repentance meant to turn from the sin of selfishness. Publicans or taxgatherers, who were everywhere detested because of their dishonesty and greed, were told to demand no more tribute than was appointed and lawful. Soldiers, or more exactly “men on military service,” possibly acting as local police, were told to extort no money by violence and to seek for none by false charges, and to be content with their wages. All who are to receive Christ in any age must turn from their sins. Repentance is not a mystical experience; it is plain and simple and practical. It consists in turning from greed and dishonesty and unkindness and violence and discontent, and from all that is contrary to the revealed will of God.
The coming of Christ was very definitely predicted by John. While some imagined that the prophet himself was the Messiah, John declared that the mission of Christ was so much greater than his own that he would be unworthy as a slave, to loose the latchet of his shoes. While John baptized with water, Christ would baptize with the Holy Spirit and with fire. Water was a material element, and merely symbolized an inward change; Jesus would bring them into fellowship with a divine Person, and would exert upon their souls cleansing and transforming power. He would come, however, to punish the impenitent; he would separate the wheat from the chaff; the former he would gather into his garner, but the chaff he would burn with unquenchable fire.
The close of the career of John is introduced by Luke at this point of his narrative to prepare the way for his account of the ministry of Christ. It was actually some time after Jesus had begun his work that Herod the tetrarch arrested John and cast him into prison because he had rebuked the profligate king for his impurity and his sin. John had been a faithful messenger of God, but the world does not reverence its prophets; they are usually imprisoned, beheaded, burned, or crucified.
(Go Back to Previous Chapter)
(Continue to Next Chapter)