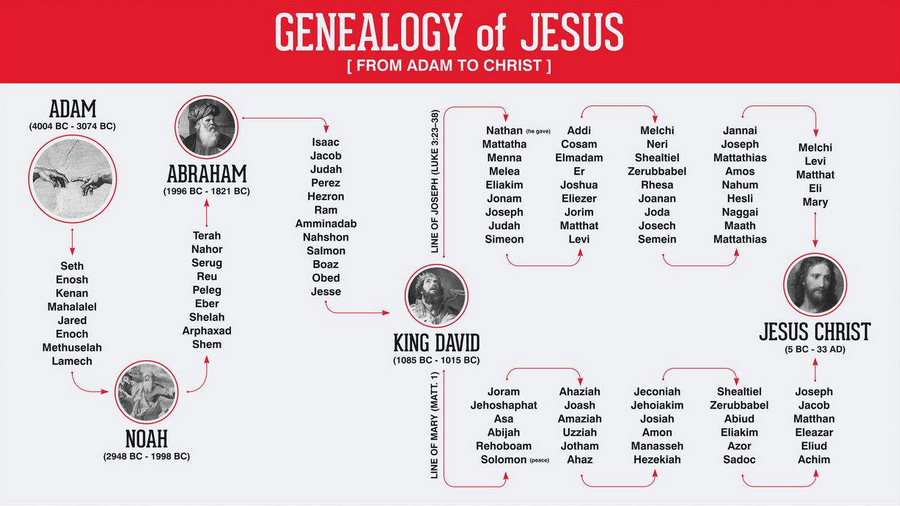 Editor’s note:  The following comprises the third chapter, third part, of The Gospel of Luke: An Exposition, by Charles R. Erdman (published 1936).  All spelling in the original.

The genealogy of Jesus given by Luke contains marked differences from that recorded by Matthew. Possibly some of these differences can be explained and may be found of real significance.
1. First of all, the genealogy is found in a different part of the Gospel. In Matthew it opens the story; in Luke it closes the third chapter. This is of course by no mere chance. The purpose of Matthew is to prove that Jesus is the Christ, the Messiah, who, as the King of Israel, fulfills all the Old Testament prophecies. It is of the utmost importance that Jesus should be shown to be the Son of David and of Abraham and that the official genealogy containing this record should open the story and even precede the account of the nativity.
Luke, however, has given the significant account of the birth and infancy and career of the great forerunner, John, because of the light these throw upon the ministry of Christ. Therefore, when the career of John has been related, when the ministry of Jesus is about to be recorded, Luke gives his genealogy to emphasize the fact that the narrative concerning John has closed and the story of the ministry of Jesus is about to begin. The genealogy is thus an artistic interlude, or an important introduction. It suggests the real purpose of the writer and marks the transition from the ministry which called men to repentance to the saving work which secures salvation from sin. The gospel is not good advice but good news. We are not followers of John but of Jesus.
2. Then again, the genealogy in Matthew follows the order of descent; Luke ascends the family line from son to father. The former is the order of an official record; individuals are registered only as they are born; the latter is that of a private document compiled from the public records with a view to fixing the attention upon the particular person whose name stands at the head of the list. This is quite in accord with the literary art of Luke, who desires at this point in the narrative to center the thought upon the supreme importance of Jesus, the Saviour, of whose redeeming work he is now to write.
3. In the third place, while the names given by Luke, from Abraham to David, correspond with those given by Matthew, the names from David to Jesus differ. Some have attempted to explain the differences on the ground that Matthew gives the genealogy of Joseph, while Luke gives that of Mary. It is probably wiser to conclude that both give the genealogy of Joseph, but Matthew traces the line of royal succession showing Jesus to be the heir of David; while Luke gives the line of actual descent. This surely accords with the purpose of Matthew who ever depicts Christ as the King, and also with the purpose of Luke who is painting for us Christ as the true, the ideal Man.
4. Then, too, the genealogy in Matthew begins with Abraham, while Luke traces the line back to Adam. The former proves Jesus to be a Jew, the true son of Abraham, in whom the covenant was fulfilled. The latter reminds us that Jesus belongs to the whole human race. It makes us look beyond all national lines and remember that this ideal Man on whom Luke is fixing our thoughts is the Saviour of mankind.
5. When the genealogy closes with the statement that Adam was “the son of God,” it does indicate that Jesus was reckoned as one in the great brotherhood of man, and like all his brothers, owed his origin to God; but it does not mean to deny that he also sustained to God a relationship that is absolutely unique. The genealogy opens with the statement that Jesus was the reputed Son of Joseph; he was the legal heir of Joseph and so the promised Son of David because of the marriage of Joseph to Mary; but he was not really the son of Joseph; he was the “only begotten Son” of God.
(Go back to previous chapter)
(Continue to next chapter)