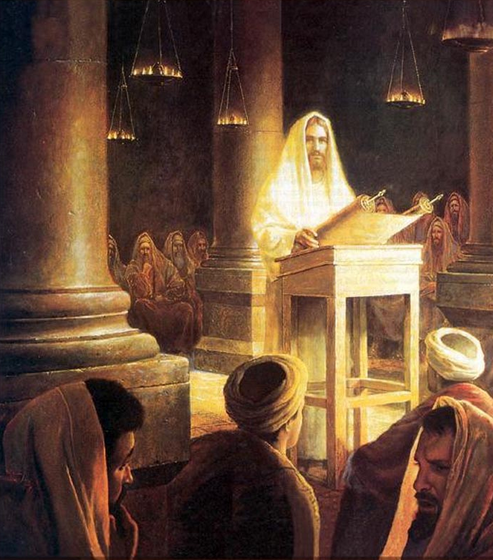 Editor’s note:  The following comprises the fourth chapter, first part (A1), of The Gospel of Luke: An Exposition, by Charles R. Erdman (published 1936).  All spelling in the original.

_____________________________________________________
14 And Jesus returned in the power of the Spirit into Galilee: and a fame went out concerning him through all the region round about. 15 And he taught in their synagogues, being glorified of all.
16 And he came to Nazareth, where he had been brought up: and he entered, as his custom was, into the synagogue on the sabbath day, and stood up to read. 17 And there was delivered unto him the book of the prophet Isaiah. And he opened the book, and found the place where it was written,
18 The Spirit of the Lord is upon me,
Because he anointed me to preach good tidings to the poor:
He hath sent me to proclaim release to the captives,
And recovering of sight to the blind,
To set at liberty them that are bruised,
19 To proclaim the acceptable year of the Lord.
20 And he closed the book, and gave it back to the attendant, and sat down: and the eyes of all in the synagogue were fastened on him. 21 And he began to say unto them, To-day hath this scripture been fulfilled in your ears. 22 And all bare him witness, and wondered at the words of grace which proceeded out of his mouth: and they said, Is not this Joseph’s son? 23 And he said unto them, Doubtless ye will say unto me this parable, Physician, heal thyself: whatsoever we have heard done at Capernaum, do also here in thine own country. 24 And he said, Verily I say unto you, No prophet is acceptable in his own country. 25 But of a truth I say unto you, There were many widows in Israel in the days of Elijah, when the heaven was shut up three years and six months, when there came a great famine over all the land; 26 and unto none of them was Elijah sent, but only to Zarephath, in the land of Sidon, unto a woman that was a widow. 27 And there were many lepers in Israel in the time of Elisha the prophet; and none of them was cleansed, but only Naaman the Syrian. 28 And they were all filled with wrath in the synagogue, as they heard these things; 29 and they rose up, and cast him forth out of the city, and led him unto the brow of the hill whereon their city was built, that they might throw him down headlong. 30 But he passing through the midst of them went his way.
_____________________________________________________

After his baptism and temptation Jesus remained for a time in Jerusalem and in Judea and then returned to Galilee where he began that ministry to which Luke devotes the next six chapters of his Gospel. Of this ministry he mentions three features: First, it was wrought in the power of the Holy Spirit; secondly, its fame extended through the entire country; and thirdly, its essence consisted in the most arresting and impressive public teaching.
The first recorded sermon of Jesus was preached in the synagogue at Nazareth, the town in which he had spent his youth and early manhood. Luke places this sermon at the very opening of his record of the public ministry of Jesus, probably because he regarded it as containing the program of that ministry, or as forming the proclamation of the saving work of our Lord.
It was a Sabbath Day. The place of worship was crowded with the relatives and friends and townsmen of Jesus. All were eager to hear one whom they knew so well, and who had attained so sudden a renown. Either at his request, or providentially, Jesus was handed the book of Isaiah to lead in the reading of the Scripture. He found the place in the prophecy where, in terms of the joy of Jubilee, the writer is describing the gladness of those who are to return from their long captivity in Babylon. When Jesus had finished the lesson he sat down, thereby taking the attitude of a public teacher. As all gazed upon him intently, he undertook to show that the prophecy was to be fulfilled by himself, claiming thereby to be the promised Messiah. The very phrase with which the prophecy begins, “The Spirit of the Lord is upon me,” indicates, when applied to himself, that he had been anointed, not with oil as a prophet or a priest or a king, but with the Holy Spirit as the Anointed One, or the Christ of God. As such he was “to preach good tidings to the poor,” that is, to those in spiritual as well as in physical poverty. He was to proclaim deliverance for those enslaved by sin and to establish those principles which will result in political freedom for mankind. He was “to set at liberty them that are bruised,” that is, to remove the consequences and the cruelties of selfishness and of crime. He was to proclaim the era of universal blessedness which will result from his perfected reign. Thus in these words, which combine the figures of deliverance from captivity with those of the joy of jubilee, Jesus expressed the gracious and beneficent character of his ministry.
His auditors listened in amazement, unable to resist the charm of his address or to deny the fascinating beauty of his words, but unable also to admit his claim; they received his predictions with stubborn unbelief. They expressed their incredulity and at the same time explained it by their question, “Is not this Joseph’s son?” They were saying in effect: “Is not this man our neighbor, the carpenter, with whom we have all been acquainted; do we not know him and his family? Surely he cannot be the Messiah.”
The reply of Jesus was to the effect that their unwillingness to accept him was due in part to the fact that he had not wrought in their presence the miracles which marked his ministry in other places. This is what he meant by quoting the proverb, “Physician, heal thyself,” that is, “Establish your claim here as you have done elsewhere, if you expect to be received as the Christ.” Jesus also quoted another proverb to explain more fully their jealous doubts: “No prophet is acceptable in his own country.” Those most familiar with great men usually are least able to appreciate their greatness; “Familiarity breeds contempt,” because men are so apt to judge one another by false standards and by that which is accidental and external and because so frequently men do not know those whom they think they know the best. This same stupid lack of appreciation shadows human lives to-day, and makes us fail to realize the worth of our friends and the value of our opportunities, until it is too late. It even has its tragic bearing upon the present ministry of Christ; some reject him for reasons altogether superficial and foolish, thinking that they know him perfectly because they long have been familiar with his name, while in reality they fail to understand the real beauty of his person and the transforming power of his grace. 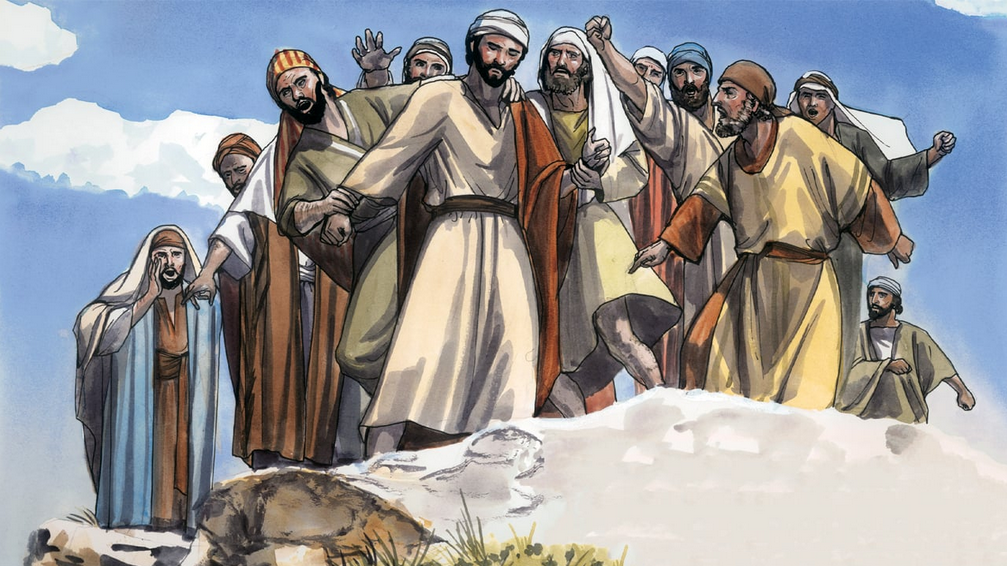 The unbelief of his auditors was turned to mad hatred as Jesus gave two examples from Old Testament history, both of which indicated that his townsmen, who knew him best, were less worthy of his saving ministry than even men of heathen nations. He even compared himself with Elijah and Elisha and indicated that as the former brought a great blessing to one who lived in Sidon and the latter to a prince in Syria, while the people in Israel were suffering for their unbelief, so the nations of the world would accept the blessed salvation of Christ while those who knew him best would suffer for their unbelief. So maddened were his hearers by this severe rebuke that they drove him from the city and tried to take his life, but he, with majestic calm and divine strength, “passing through the midst of them went his way.”
It is still true that those who have enjoyed the best opportunities for knowing Christ often reject him; but, where faith is present, broken hearts are healed as by Elijah of old and lepers are cleansed as was Naaman by the word of Elisha. Thus in this scene in the synagogue of Nazareth, Jesus indicated not only the grace of his ministry but its universal power. He came to relieve all the needs of mankind and in all the world.
(Go back to previous chapter)
(Continue to next chapter)