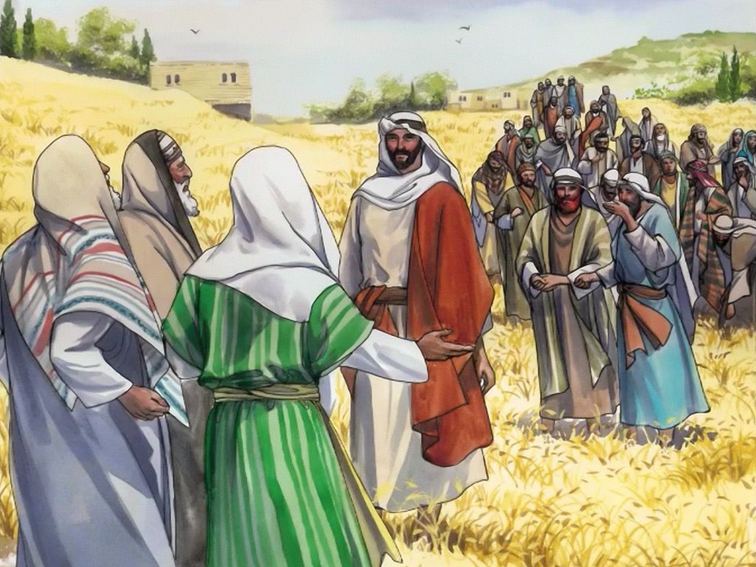 Editor’s note:  The following comprises the fourth chapter, second part (B6), of The Gospel of Luke: An Exposition, by Charles R. Erdman (published 1936).  All spelling in the original.

6. The Sabbath Controversy (6:1-11)
___________________________________________________
1 Now it came to pass on a sabbath, that he was going through the grainfields; and his disciples plucked the ears, and did eat, rubbing them in their hands. 2 But certain of the Pharisees said, Why do ye that which it is not lawful to do on the sabbath day? 3 And Jesus answering them said, Have ye not read even this, what David did, when he was hungry, he, and they that were with him; 4 how he entered into the house of God, and took and ate the showbread, and gave also to them that were with him; which it is not lawful to eat save for the priests alone? 5 And he said unto them, The Son of man is lord of the sabbath.
6 And it came to pass on another sabbath, that he entered into the synagogue and taught: and there was a man there, and his right hand was withered. 7 And the scribes and the Pharisees watched him, whether he would heal on the sabbath; that they might find how to accuse him. 8 But he knew their thoughts; and he said to the man that had his hand withered, Rise up, and stand forth in the midst. And he arose and stood forth. 9 And Jesus said unto them, I ask you, Is it lawful on the sabbath to do good, or to do harm? to save a life, or to destroy it? 10 And he looked round about on them all, and said unto him, Stretch forth thy hand. And he did so: and his hand was restored. 11 But they were filled with madness; and communed one with another what they might do to Jesus.
___________________________________________________
Jesus had aroused the anger of the Pharisees by his claim to forgive sins. He had further enraged them by his treatment of sinners. But he brought their hatred to a climax of fury by his attitude toward Sabbath observance. Henceforth they sought to destroy him.
The question of the Sabbath has never lost its interest. The followers of Christ need to stand firmly by the principles set forth by their Lord. These principles are few but fundamental: The Sabbath is a day designed for worship and for rest and is to be broken only by works of necessity and of mercy.
The first of these exceptions to the required rest of the Sabbath Day was illustrated by the case of the disciples who were accused by the Pharisees of breaking the Sabbath because as they walked through the fields they picked the ripened ears and thus, according to the interpretation of their enemies, were guilty of working on the Sabbath Day. Our Lord did not deny that the Sabbath law had been broken. He merely referred his enemies to the case of David and his followers who, forced by hunger, broke the Mosaic Law in entering the tabernacle and eating the “showbread.” Jesus argued that, when necessary to relieve their hunger, his followers were also justified in disregarding the law of rest.
An illustration of the second exception to the law of absolute cessation from labor was given “on another sabbath” when in the synagogue Jesus healed a man whose right hand was “withered.” The Pharisees regarded this action of Jesus as another breach of the law of rest. Jesus defended his action on the ground that it was dictated by mercy and that work which secured relief from suffering was allowable on the Sabbath Day. He replied to his enemies by a searching question, assuming the principle that refraining from help is the same as inflicting harm. He, asked them whether they regarded the Sabbath Day as of such character as to make it right on that day to do that which on other days was wrong: “I ask you, Is it lawful on the sabbath to do good, or to do harm? to save a life, or to destroy it?”
While Jesus taught that the law of rest might thus be broken to meet the necessities of man and to show mercy to those in need or in distress, he by no means abrogated the Sabbath. He declared, however, that “the Son of man is lord of the sabbath,” by which he meant that as the representative of men he had a right to interpret the Law for the highest good of man. He was justified in relieving the Sabbath from the narrow and burdensome observances which had been bound upon it by the Pharisees and to restore it to mankind as a glad day of rest and of refreshment and of fellowship with God.
(Go back to previous chapter)
(Continue to next chapter)

Video: Why "Same-Sex" Marriage Is Wrongheaded