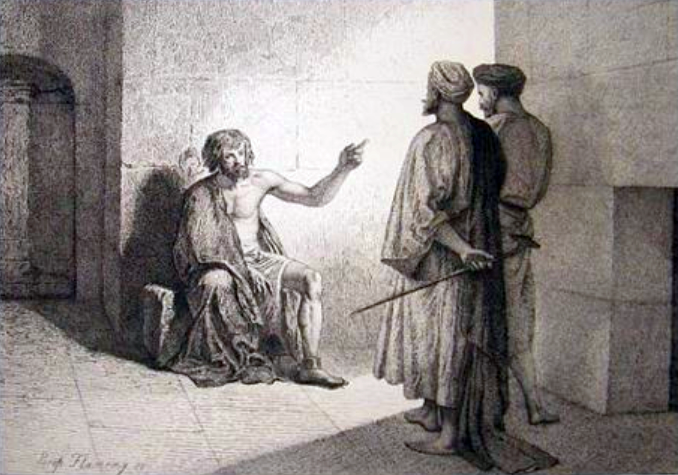 Editor’s note:  The following comprises the fourth chapter, third part (C5), of The Gospel of Luke: An Exposition, by Charles R. Erdman (published 1936).  All spelling in the original.

5. Jesus Praising John (7:18-35)
___________________________________________________
18 And the disciples of John told him of all these things. 19 and John calling unto him two of his disciples sent them to the Lord, saying, Art thou he that cometh, or look we for another? 20 And when the men were come unto him, they said, John the Baptist hath sent us unto thee, saying, Art thou he that cometh, or look we for another? 21 In that hour he cured many of diseases and plagues and evil spirits; and on many that were blind he bestowed sight. 22 And, he answered and said unto them, Go and tell John the things which ye have seen and heard; the blind receive their sight, the lame walk, the lepers are cleansed, and the deaf hear, the dead are raised up, the poor have good tidings preached to them. 23 And blessed is he, whosoever shall find no occasion of stumbling in me.
24 And when the messengers of John were departed, he began to say unto the multitudes concerning John, What went ye out into the wilderness to behold? a reed shaken with the wind? 25 But what went ye out to see? a man clothed in soft raiment? Behold, they that are gorgeously apparelled, and live delicately, are in kings’ courts. 26 But what went ye out to see? a prophet? Yea, I say unto you, and much more than a prophet. 27 This is he of whom it is written,

Behold, I send my messenger before thy face,

Who shall prepare thy way before thee.

28 I say unto you, Among them that are born of women there is none greater than John: yet he that is but little in the kingdom of God is greater than he. 29 And all the people when they heard, and the publicans, justified God, being baptized with the baptism of John. 30 But the Pharisees and the lawyers rejected for themselves the counsel of God, being not baptized of him. 31 Whereunto then shall I liken the men of this generation, and to what are they like? 32 They are like unto children that sit in the marketplace, and call one to another; who say, We piped unto you, and ye did not dance; we wailed, and ye did not weep. 33 For John the Baptist is came eating no bread nor drinking wine; and ye say, He hath a demon. 34 The Son of man is come eating and drinking; and ye say, Behold, a gluttonous man, and a winebibber, a friend of publicans and sinners! 35 And wisdom is justified of all her children.
___________________________________________________
Due to the darkness of his dungeon or to the long delay of Jesus in fulfilling his cherished hopes, the mind of John the Baptist became clouded with doubt and he sent messengers to Jesus to ask whether or not he was really the Messiah whom John had declared him to be, “Art thou he that cometh, or look we for another?” John had not lost faith in God or in his promises; he believed that if Jesus were not the Messiah, the Messiah was still to come.
The Master lovingly reassured his great herald by sending back the report of the mighty works which he was accomplishing. John was already familiar with these acts but the recital must have dispelled his fears. Jesus sympathizes with us also in our hours of darkness, but his relief usually consists in reminding us of facts we already know concerning his power and love and presence and the truths of his written Word.
Jesus, however, does not praise us for our doubts; he sent to John a gentle and loving rebuke: “And blessed is he, whosoever shall find no occasion of stumbling in me.” This benediction he pronounces upon all who in spite of darkness, imprisonment, delay, and mystery still confidently put their trust in him.
It was upon this occasion when John seems to have failed that Jesus pronounced upon him unparalleled praise, declaring that “among them that are born of women there is none greater than John.” He vindicated this deliberate judgment and thereby, showed wherein true greatness lies. He spoke first of the character of John and then of his career. He praised the man and then the messenger. He described his moral and then his official greatness.
His expression as to the character of John is voiced by two questions, to each of which a negative answer of course must be given: first, “What went ye out into the wilderness to behold? a reed shaken with the wind?” Surely true greatness does not lie in the moral cowardice which bends before every breeze; quite on the contrary, John was like a rock which no storm could move.
Then there was a second question: “What went ye out to see? a man clothed in soft raiment?” Surely greatness does not lie along the line of self-gratification and indulgence. John endured all hardships and was oblivious to all human delights because he was so devoted to his divine task. Courage and consecration—these constitute prime factors in moral greatness.
The real greatness of John consisted, however, in his mission. Jesus declared that he was the messenger whom Malachi had predicted should prepare the way of the Lord. Other prophets had appeared and had predicted the coming of the Messiah. It was given to John not only to declare that the Christ would come, but to point to him and to say, “Behold, the Lamb of God! … this is the Son of God.” No greater dignity had ever been conferred upon a human soul; and no higher privilege can now be enjoyed than that of turning the thoughts and hearts of men to Jesus Christ, the Saviour of the world. The present followers of Christ have a larger knowledge of him than was possessed by John. What their relative positions will be in the glory of the perfected Kingdom will depend upon the comparative faithfulness with which they serve their Master.
The praise of John is sharply contrasted with the condemnation of the Pharisees which Jesus now turned to express. He declared that these professed leaders were like children sitting in the market place, complaining one to another that they are willing to play neither at mock funerals nor at mock weddings, for when John came they refused to follow him because his aspect and message were too severe, and when Christ came they criticized him as being too genial, “a friend of publicans and sinners.” The trouble with the Pharisees was that they made an excuse of the demeanor of John and the conduct of Jesus for refusing what was essential in their mission and message. They were unwilling to repent at the command of John or to put their trust in Christ in response to his promise of grace and life. Thus some men are still refusing to accept the salvation which is offered because of something in Christianity which is purely external, while they fail to appreciate its true essence; but there were those in the days of Jesus, and there are those to-day who are willing to accept both the call to repentance and the offer of life, “And wisdom is justified of all her children.”
(Go back to previous chapter)
(Continue to next chapter)