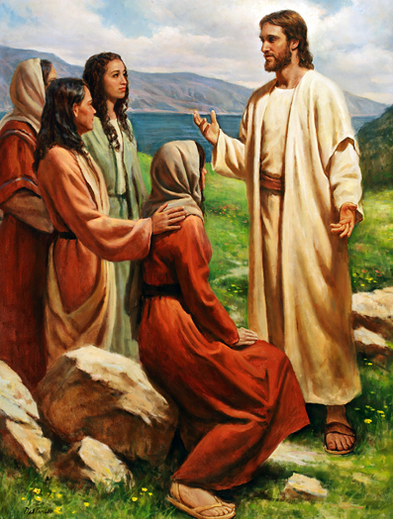 Editor’s note:  The following comprises the fourth chapter, third part (C7), of The Gospel of Luke: An Exposition, by Charles R. Erdman (published 1936).  All spelling in the original.

7. The Ministering Women (8:1-3)
___________________________________________________
1 And it came to pass soon afterwards, that he went about through cities and villages, preaching and bringing the good tidings of the kingdom of God, and with him the twelve, 2 and certain women who had been healed of evil spirits and infirmities: Mary that was called Magdalene, from whom seven demons had gone out, 3 and Joanna the wife of Chuzas Herod’s steward, and Susanna, and many others, who ministered unto them of their substance.
___________________________________________________
Luke writes the Gospel of womanhood. He alone records those tender incidents in the lives of Elisabeth, Mary, and Anna which are associated with the infancy of Jesus; he alone tells us of the widow of Nain whose son Jesus restored to life; of the woman bowed down by Satan but relieved by Jesus; of the penitent sinner who anointed his feet; of the domestic scene in the home of Mary and Martha; of the woman who congratulated the mother of Jesus; and of the women who condoled with him on his way to the cross. Perhaps most significant of all is the statement of Luke that as Jesus and his apostles moved about Galilee preaching the gospel, they were attended by a company of women “who ministered unto them of their substance.”
Among these women Luke mentions “Mary that was called Magdalene,” probably so designated from the town of Magdala where formerly she had lived. By this title she was distinguished from Mary the mother of Jesus, from Mary of Bethany, and from other women of this same name.
It is a cruel error to confuse her with the sinful woman of whom Luke has just been writing. Mary had suffered from demon possession, as here stated, but there is nothing in the Gospels to indicate that she had ever been a woman of notoriously evil life.
Luke also mentions Joanna, whose husband, Chuzas, had charge of the household and personal estates of King Herod, evidently then a woman of some social standing; but of her and her companions nothing further is known, excepting this important fact, that their motive in ministering to the Master was that of gratitude; they “had been healed of evil spirits and infirmities.”
This statement by Luke is brief but illuminating. It throws light upon an interesting question to which no other answer is given in the Gospels: How did Jesus and his followers secure financial support during the years of his ministry? Evidently those who had received from him spiritual help gladly supplied his temporal wants and rendered to him all needful service. Thus this passage indicates not only what Jesus did for women, but what women did for him. It suggests a question: Who can estimate how far the gifts and sacrifices of grateful women have been making possible, through the passing ages, the preaching of the gospel in all the world?
(Go back to previous chapter)
(Continue to next chapter)

Video: Free Plants For Everyone