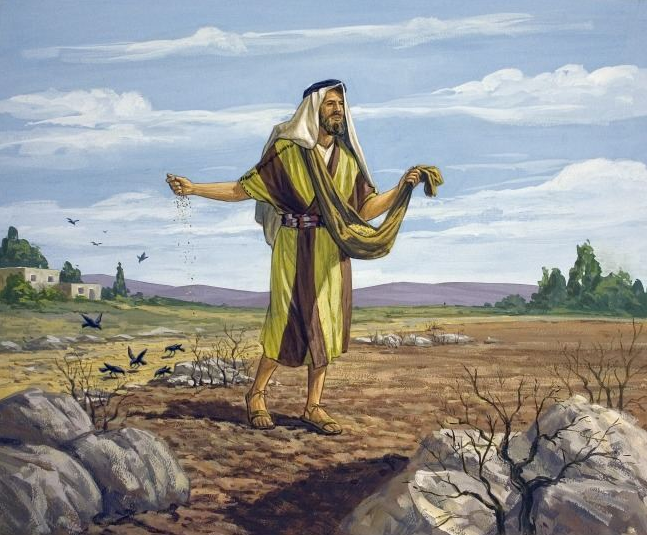 Editor’s note:  The following comprises the fourth chapter, third part (C8), of The Gospel of Luke: An Exposition, by Charles R. Erdman (published 1936).  All spelling in the original.

8. The Parable of the Sower (8:4-18)
___________________________________________________
4 And when a great multitude came together, and they of every city resorted unto him, he spake by a parable: 5 The sower went forth to sow his seed: and as he sowed, some fell by the way side; and it was trodden under foot, and the birds of the heaven devoured it. 6 And other fell on the rock; and as soon as it grew, it withered away, because it had no moisture. 7 And other fell amidst the thorns; and the thorns grew with it, and choked it. 8 And other fell into the good ground, and grew, and brought forth fruit a hundredfold. As he said these things, he cried, He that hath ears to hear, let him hear.
9 And his disciples asked him what this parable might be. 10 And he said, Unto you it is given to know the mysteries of the kingdom of God: but to the rest in parables; that seeing they may not see, and hearing they may not understand.
11 Now the parable is this: The seed is the word of God. 12 And those by the way side are they that have heard; then cometh the devil, and taketh away the word from their heart, that they may not believe and be saved. 13 And those on the rock are they who, when they have heard, receive the word with joy; and these have no root, who for a while believe, and in time of temptation fall away. 14 And that which fell among the thorns, these are they that have heard, and as they go on their way they are choked with cares and riches and pleasures of this life, and bring no fruit to perfection. 15 And that in the good ground, these are such as in an honest and good heart, having heard the word, hold it fast, and bring forth fruit with patience.
16 And no man, when he hath lighted a lamp, covereth it with a vessel, or putteth it under a bed; but putteth it on a stand, that they that enter in may see the light. 17 For nothing is hid, that shall not be made manifest; nor anything secret, that shall not be known and come to light. 18 Take heed therefore how ye hear: for whosoever hath, to him shall be given; and whosoever hath not, from him shall be taken away even that which he thinketh he hath.
___________________________________________________
Because of its greater length and more elaborate workmanship and greater fullness of detail, this story of the sower is rightly regarded as the first parable of our Lord, even though he had previously used brief illustrations which were designated by the same name. Parables henceforth formed a prominent part of his teaching, and that he was now beginning a somewhat new method of instruction is evident from the fact that the disciples now asked him to explain his meaning, v. 9, and from the fact that he here gave the reason for the use of all his parables. This reason is twofold: these inimitable illustrations would enable those who were attentive and rightly disposed toward him to remember more easily the teachings of the Master; while to inattentive or hostile minds the meaning would be veiled. V. 10. This twofold purpose met the demands of the crisis which had arisen, due on the one hand to the increasing popularity of Jesus’ teachings and on the other to the murderous hatred and dark plots of the Pharisees and scribes.
The parable of the Sower thus forms a proper introduction to all the parables for they are vehicles of truth, and our Lord here made it clear that the effect of truth depends upon the spiritual state of the hearers. This is sometimes called the parable of the Soils, for it illustrates the various states of heart found among men to whom the Christian message comes.
In some cases “the word of God,” whether preached by Christ or by his followers, falls on hearts which are pictured by the hard-trodden footpath which runs through the field of grain. No possible impression can be made. The Word finds no entrance and Satan snatches it away as a bird picks up the grain which falls by the wayside. Faith and salvation cannot result.
Other hearers are compared to the thin layer of earth which covers a ledge of stone. Seed which falls into such soil springs up most quickly because warmed by the underlying rock; but as the roots cannot strike downward, the grain soon withers beneath the scorching sun. So there are hearers who receive with joy the message of life, but when subjected to the persecution and trials which followers of Christ must endure, they quickly desert his cause.
Other hearers are compared to seed which falls where thorns are growing. This seed springs into life but it has not room for development. It is robbed by the thorns of its needed nourishment. Thus some Christians are so preoccupied by “cares and riches and pleasures” that they can bear no spiritual fruit.
There are those, however, who are like seed which fell on “good ground” and “brought forth fruit a hundredfold;” they receive the truth “in an honest and good heart” and patiently and perseveringly they produce in their lives a golden harvest of grain.
The great message of the parable is summarized in the words of our Lord, “Take heed therefore how ye hear.” V. 18. The purpose of his parables, as of all his teachings, was to give spiritual light. Those who love him and obey his word will have their understanding quickened and their knowledge increased; but one who is careless or disobedient to the truth, will lose “even that which he thinketh he hath.” It is a great privilege to hear the gospel of Christ, but it involves a great responsibility as well.
(Go back to previous chapter)
(Continue to next chapter)

Sermon: The Disclosing of Secrets