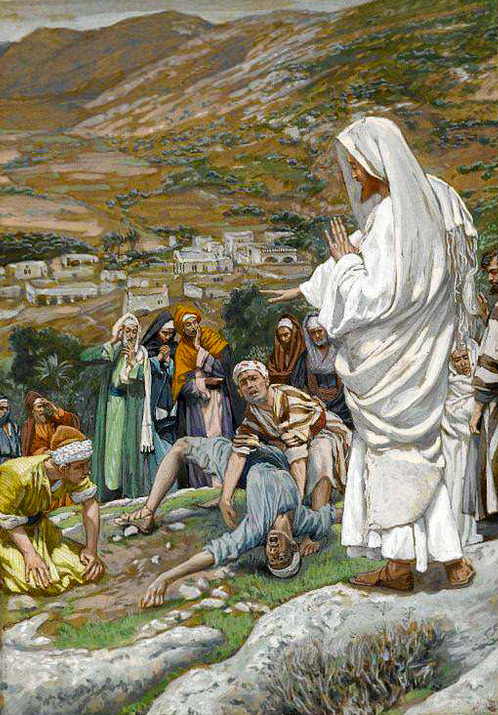 Editor’s note:  The following comprises the fourth chapter, fourth part (D5), of The Gospel of Luke: An Exposition, by Charles R. Erdman (published 1936).  All spelling in the original.

5. The Demoniac Boy (9:37-45)
___________________________________________________
37 And it came to pass, on the next day, when they were come down from the mountain, a great multitude met Him. 38 And behold, a man from the multitude cried, saying, Teacher, I beseech thee to look upon my son; for he is mine only child: 39 and behold, a spirit taketh him, and he suddenly crieth out; and it teareth him that he foameth, and it hardly departeth from him, bruising him sorely. 40 And I besought thy disciples to cast it out; and they could not. 41 And Jesus answered and said, O faithless and perverse generation, how long shall I be with you, and bear with you? bring hither thy son. 42 And as he was yet a coming, the demon dashed him down, and tare him grievously. But Jesus rebuked the unclean spirit, and healed the boy, and gave him back to his father. 43 And they were all astonished at the majesty of God.
But while all were marvelling at all the things which He did, He said unto his disciples, 44 Let these words sink into your ears: for the Son of man shall be delivered up into the hands of men. 45 But they understood not this saying, and it was concealed from them, that they should not perceive it; and they were afraid to ask Him about this saying.
___________________________________________________
It is not strange that artists love to paint the contrast between the picture of Jesus on the mountain encompassed by glory and of the demoniac boy surrounded by the multitudes on the plain; yet it requires no canvas or artificial color to heighten the contrast presented by the historian in his simple story. Jesus long before had learned what it was to exchange the glories of heaven for the shadows and sufferings of earth and the compassion which drew Him from the skies was never withheld, even at times when He naturally might have been absorbed in thoughts concerning His coming suffering and redeeming work. He was instantly moved with tender pity as He heard the agonizing words of the father and saw the distress of the son. However, He was even more moved by the unbelief and sin and anguish and godlessness of the world which He had come to save, and of which this scene was but a symbol and a picture. “O faithless and perverse generation,” He cried, “how long shall I be with you, and bear with you?” Can it not be said reverently that the contrasted experiences of the mountain and the plain made Jesus for the moment homesick for heaven? Yet Jesus neither hesitated nor delayed in the path of duty or in the presence of human need. He “rebuked the unclean spirit, and healed the boy, and gave him back to his father.”
While all were wondering and astonished at His divine power and marvelous works, He turned to His disciples to impress upon them the dark secret which was resting on His soul. He told them that the time was near when He was to be given up to suffer and to die; “But they understood not this saying.” Here was a Man whose sympathy was tender toward all; but who sympathized with Him? How often some one of His followers has borne a burden of hidden sorrow, even in the company of friends and when surrounded by admiring throngs!
(Go back to previous chapter)
(Continue to next chapter)

Why They Hate Dugin