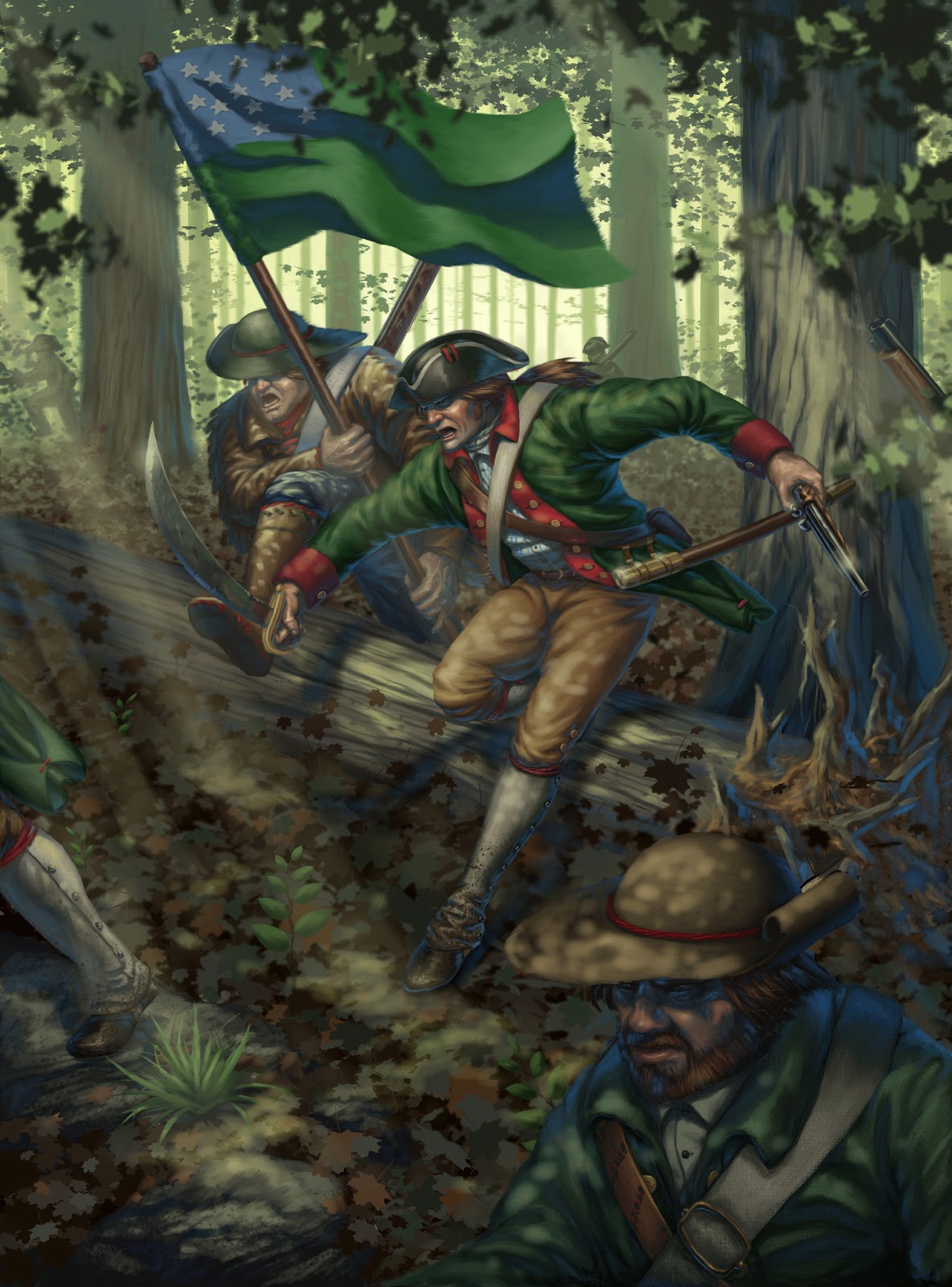 Editor’s note: The following is extracted from Hero Tales From American Life, by Francis Trevelyan Miller (published 1909).
It was in the years when King George of England ruled over the American colonies. The people of New York were in dispute with the people of New Hampshire over the boundary line. The matter had been referred to the King and he had decided in favor of New York. The boundary war waged for years, the people of New York trying in vain to eject the New Hampshire settlers, until the irate Governor Tryon offered a reward of one hundred and fifty pounds, the currency of those times, for the capture of the leader of the settlers, who called themselves the “Green Mountain Boys.”
This mountaineer captain was a giant in strength, tall, and strong as a lion.
“I’ll give fifty pounds,” he retaliated when he heard of the price on his head, “for the capture of Governor Tryon.”
The dispute was reaching a crisis, when word of the battle of Lexington came to the mountaineers, the forerunner of the great struggle for American independence. Immediately discarding their private quarrel, the Green Mountain Boys armed and prepared to take up the common cause of their country.
On the shores of Lake George, the present boundary-line between New York and New England, was situated the fort of Ticonderoga, garrisoned by English soldiers. The colonists were in need of ammunition. The daring leader of the Green Mountain Boys determined to capture the fort and its great store of powder and arms. 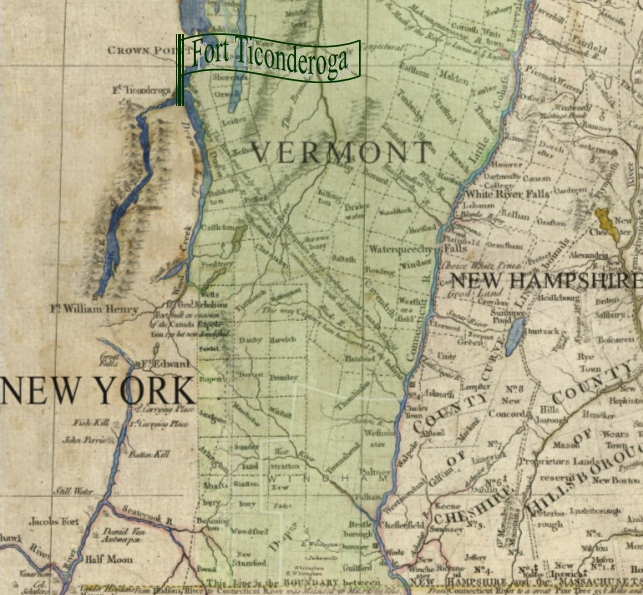 It was in the year 1775. They had reached the shores of Lake George and were about to cross the lake to attack the fort. An officer, on horseback, galloped from the woods into the ranks of the raiders.
“I have been appointed by the Governor of Massachusetts to command this expedition,” he announced.
“We are able to command our own expedition,” replied the raiders, and, loyal to their gallant young giant who led them, the Green Mountain Boys refused to obey the new commander, and pushed on across the lake to attack the English.
On the morning of the tenth of May, there was a gray mist rising from the lake, as the Green Mountain Boys approached the fort. Up the hill they crept. They could see, over the crest of the hill, the English flag bravely flying.
In the lead of the courageous patriots was the young giant. Along the line of eighty-three men passed the low-toned order, “Advance.”
With a rush, they had crossed the intervening space and stood before the gate of the fort. A sentry in a sally-port snapped his musket at the invaders and turned and fled. 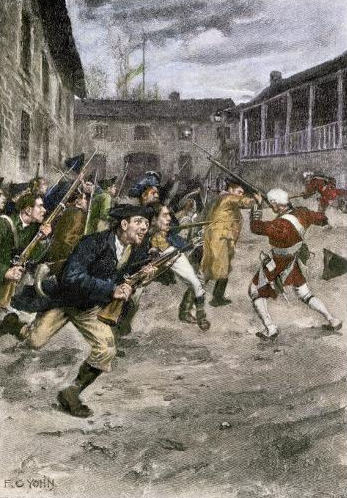 The gate flew back with a crash, and the patriots dashed into the fort. Far in advance was the young giant, rushing for the commanding officer’s quarters.
Meeting with but feeble resistance from the terrified British, he reached the door. Flinging it wide open, he cried: “Surrender!”
“By whose authority?” stammered the dazed officer, springing up from his seat.
“In the name of the Great Jehovah and the Continental Congress,” thundered the leader of the Green Mountain Boys. 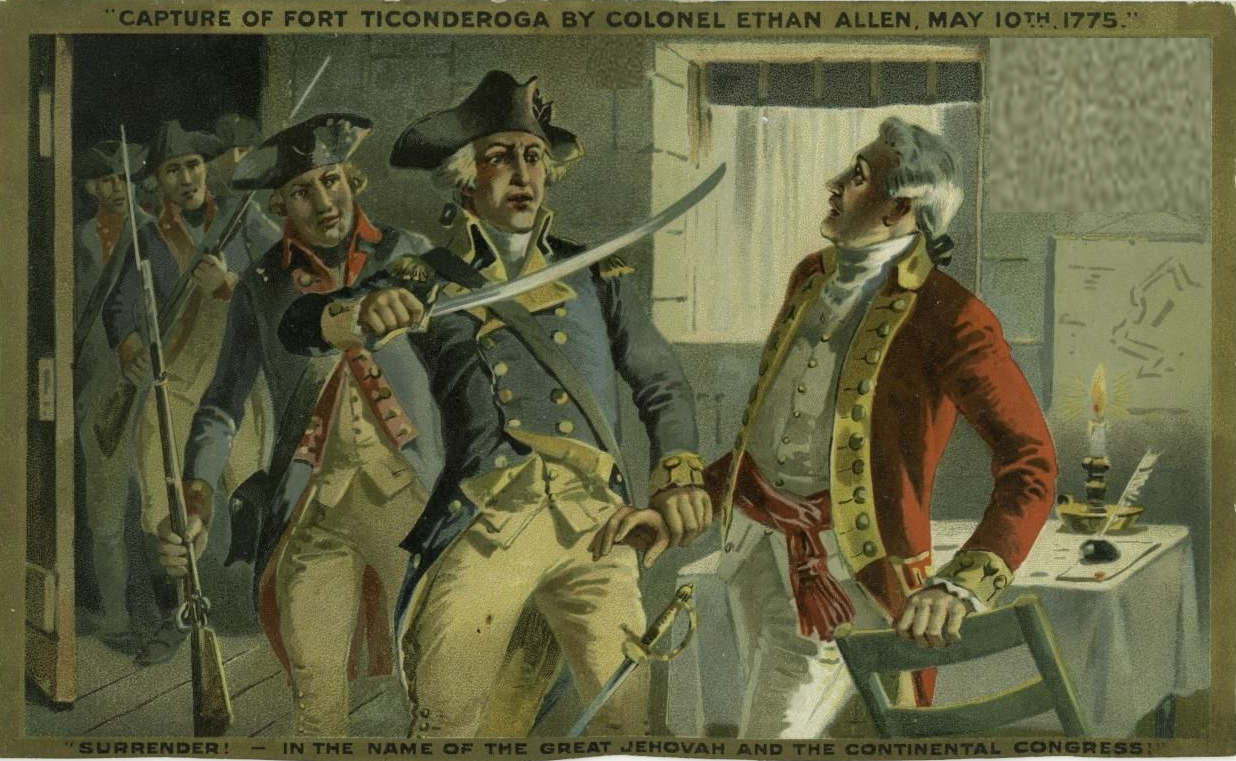 The surprised officer could scarcely believe his ears, but the Green Mountain Boys crowded into the room, and he surrendered the fort and his sword.
The daring young American giant, and his band of mountaineers, had surprised and captured the fort without firing a single shot. They found large quantities of powder, shot and arms, which the colonists needed sorely. They also gained the key to the secret route to and from Canada, which was later to become a factor in the long war.
The daring of the Green Mountain Boys startled the British and thrilled the Americans. Their commander was sent to Canada on a dangerous mission, requiring great courage and judgment, and while engaged in an attempt to take Montreal, he was captured and sent to England as a prisoner of war. He was later returned to this country and allowed his liberty on parole. After the conclusion of the war, he returned to his native state.
Generous and frank, loyal to his country and true to his friends, he exerted a powerful influence on the early history of the great Commonwealth of Vermont, and helped to make it the rich and independent state that it is to-day — this young giant of brawn and brain, Ethan Allen. 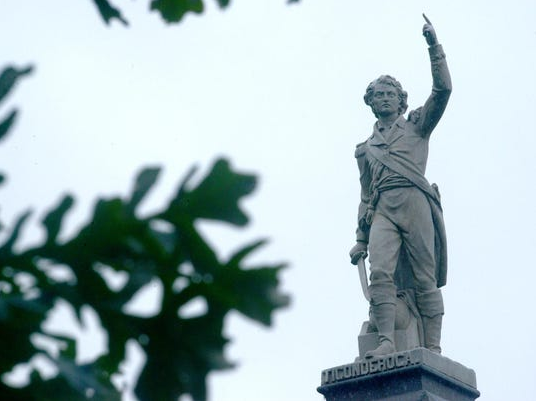 Who Ya Gonna Call?

Video: Do You Have Low Potassium?