Editor’s note: The following is extracted from Above and Beyond: The Story of the Congressional Medal of Honor, by Joseph L. Schott (published 1963).

The only chaplain in Navy history to win the Medal of Honor was Lieutenant Commander Joseph Timothy O’Callahan, a Jesuit priest on the U.S. carrier Franklin. On March 19, 1945, the Franklin and the rest of Task Force Fifty-eight were cruising fifty-three miles west of Shikoku, Japan, waiting for daylight to launch the attack. Prior to that fateful day, the Franklin had been struck by enemy air bombs twice and survived. Many of the crew spoke forebodingly that a third time might be fatal. Adding fuel to the superstitious fires was the Franklin’s number as an Essex class carrier—CV Thirteen.

Chaplain O’Callahan pulled himself wearily from his bunk at 5:00 A.M. He had to make his rounds of the pilots’ ready-rooms to say a brief prayer with them prior to take-off. The first strike was at 5:30. By seven o’clock the chaplain had finished his rounds and sat down at a table with other officers for breakfast. At 7:07 A.M. time had run out. The carrier was about to be struck by its third air bomb.

One minute O’Callahan was sitting at the table staring distastefully at his cold French toast and the very next there were two sudden shocking explosions and he was sprawling under the table with the others, his rimless spectacles hanging from one ear, his hands shielding his eyes and face from the flying glass of broken light fixtures. Then Chaplain O’Callahan had a thirty-second lull to voice a brief prayer before the first great holocaust rocked the ship.

A twin-engined Japanese plane, called a Judy in naval parlance, had zoomed down from a cloud over the bow of the Franklin at seventy-five feet and dropped two bombs in quick succession. One bomb exploded in the hangar near the gasoline pumps. The other landed squarely in the middle of thirty Helldivers, gassed and loaded with bombs, on the flight deck.

Thousands of gallons of high-test airplane gasoline exploded, shooting a wall of fire the entire length of the hangar deck and leaving in its wake eight hundred charred corpses. 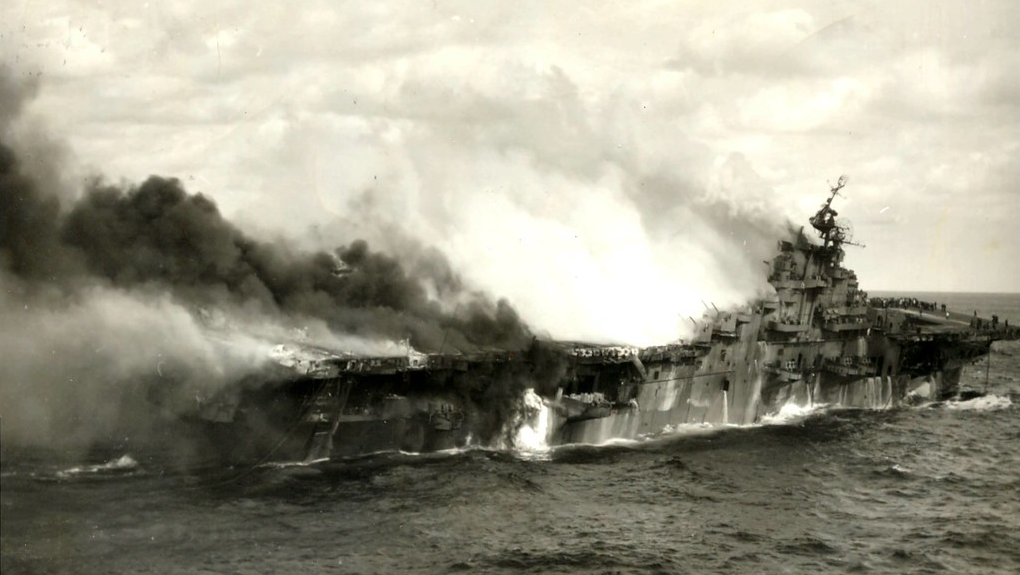 From then on for the next several hours, Chaplain O’Callahan was afforded a vivid dramatization of what hell was like. He groped his way through the smoke-filled corridors to the open deck and ministered to the wounded and dying amid the violently exploding bombs, shells and rockets. He knelt calmly with the wounded as burning fragments and debris rained down on the deck. Then he organized and led fire-fighting crews into the fiery bowels of the ship, and helped in the jettisoning of live hot bombs which rolled helter-skelter on the decks.

As he led a hose crew splashing water on the flames near a group of wounded, a fountain of clear liquid began spouting from a vent on the deck. “Padre!” the captain shouted from the bridge. “For God’s sake, find out if that’s gasoline! If it is, get the wounded away from there fast!”

For a second O’Callahan stared blankly at the voice from the bridge. If it did happen to be gas, where in the name of all the saints was he supposed to move the wounded to? But orders were orders.

Toiling up the slanted deck to the bubbling geyser, he thought numbly, I’ll taste it to see if the stuff’s gasoline. If it catches fire, I’ll look like a human volcano. Cupping his hands he brought some of the foamy spew to his lips. He made a face and spat. Salt water. It was just a burst water main.

Turning to the bridge the chaplain held his thumbs up, nearly doing a pratfall on the slanting deck. Waving a relieved acknowledgment, the captain growled to his navigator, “I’m going to put that Irishman in for a medal if he lives through this.”

The Irishman lived through the carnage and the medal he got was the Medal of Honor.

A Christmas Sermon: No Room At the Inn

The Death of Europe, With Douglas Murray

Editor’s note: Here is another article by our friend Hephaestus. The world is in a Pre-Dystopian