Editor’s note:  The following is extracted from First and Last, by Hilaire Belloc (published 1911).  All spelling in the original.

There are some truths which seem to get old almost as soon as they are born, and that simply because they are so astonishingly true that people soon get to feel as though they have known them all their lives; and such a truth is that which first one writer and then another in the last five years has been insisting upon, until it is already a perfect commonplace that nations do not know their own qualities. The inmost, the characteristic thing, that which differentiates one community from another, as tastes or colours differentiate things–that a nation hardly ever knows until it is pointed out to it by some foreigner or by some observer from within. It cannot know it, because one cannot tell the very atmosphere in which one lives. It is universal and therefore unnoticed. Now, if this is true of any nation, it is particularly true of England. And English people need to be told morning, noon, and night, not indeed the particular national characteristic which they have, since for this no particular name could be found, but rather what its evidences are; as, for instance, spontaneity in design, a passion for the mystical in poetry and the arts; a power in water-colour, in which they are perhaps quite alone, and certainly the first in Europe; and, above all, the chief, the master thing of all, humour. 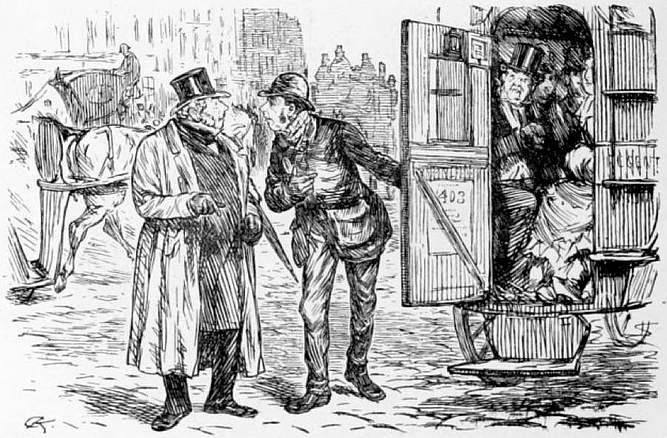 There is not nor ever will be anything like English humour. It is a thing quite apart, and by it for now more than two hundred years you may know England. It does not puzzle the foreigner (as the more blatant kind of intellectual man is too fond of boasting that it does); he simply admires it as a rule and wonders at it always; sometimes he actually dislikes it, but by it he knows that the thing he is reading is English and has the savour and taste of England.

It is impossible to define it, because it is so full of stuff and so organic a quality; but in our own time it was principally the pencil of Charles Keene that has summed it up and presented it in a moment and at once to the eye–the pencil of Charles Keene and that profound instinct whereby he chose the legends for his drawing, whether he found them by his own sympathy with the people or whether they were suggested to him by friends.

It is the verdict of the men most competent perhaps to judge upon these things that he had the greatest graphic power of his time, and that no one had had that power to such an extent since Hogarth. Upon these things the men of the trade must dispute; the layman cannot doubt that he had here a genius and a genius comprehensively national. It is the essence of a good draughtsman that what he wants to draw, that he draws. The line that he desires to see upon the paper appears there as his fingers move. It is a quality extremely rare in its perfection. And Charles Keene had it in perfection, as in totally different manner had the offensive and diseased talent of Beardsley. 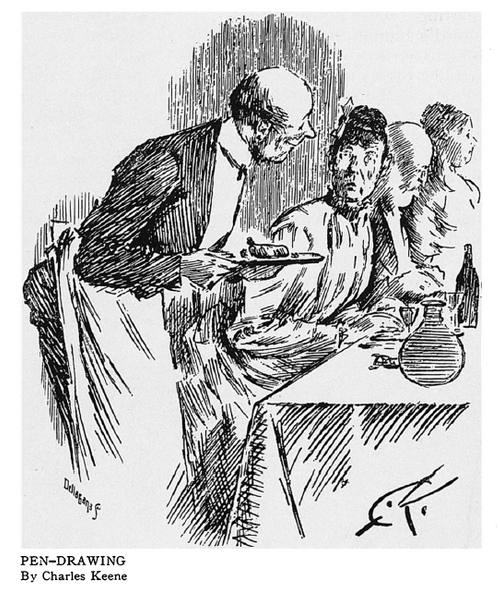 But more important than the power to do is the quality of the thing done, and the work of Charles Keene, multitudinous, varied, always great, is an inheritance for English people comparable to the inheritance they have in Dickens. It has also what Dickens had, a power of representing, as it were, the essential English. Just that which makes people say (with some truth) that Dickens never drew a gentleman would make them say with equal truth that what was interesting in the gentlemen of Charles Keene (and he perpetually drew them) was not the externals upon which gentlemen so pride themselves, but the soul. Thus I have in mind one picture wherein Keene drew a gentleman; true, he was a gentleman who had just swallowed a bad oyster, and therefore he was a man as well. I recall another of an old gentleman complaining of the caterpillar on his chop: he is a gentleman of the professional rather than the territorial classes, and, great heavens! what a power of line! All you see beneath the round of his hat is the end of his nose, the curve of his mouth, and two bushy ends of whiskers. Yet one can tell all about that man; one could write a book on him. One knows his economics, his religion, his accent, and what he thought of the Third Napoleon and what of Garibaldi. I have called draughtsmanship of this quality an inheritance–I might have called it perhaps with better propriety a monument. It is possible that England in the near future will look back with great envy, as she will certainly look back with great pride, to the generation preceding our own: they were a solid and a happy community of men. How much they owed to fortune, how much to themselves, it is not the place of such random stuff as mine to consider. 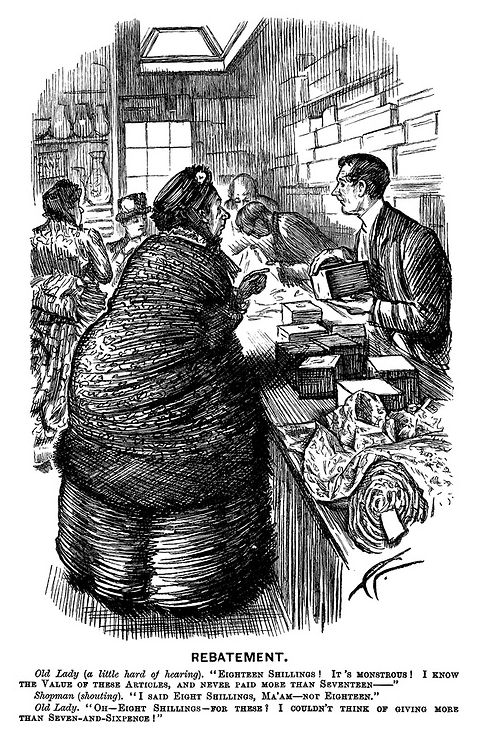 They were nearly impregnable in their island; they were not bellicose. They made and sold for all the world. Whether the very different future which we are now entering is to be laid to their door or to our own, that generation will still remain one of the principal things in English history, like the Elizabethan generation, or the group of men who organized the Seven Years’ War, or the group of men who fought in the Peninsula. And of that generation the note of health and of stability is represented by its humour. I am not sure that of all things educational to young men with no personal memory of that time, and especially to young men with no family tradition of it to reflect it in their books and their furniture; and–this yet more particularly–to young men born out of England yet claiming communion with England, the Anglo-Indians and the Colonials–I am not sure, I say, that the thing most educational to these would not be some hundred of Charles Keene’s drawings, for therein they would find what it was that gave them the power and the wealth that can hardly be defended unless its traditions are continued. Note how Victorian England dealt with the humour of a Volunteer review; note how it dealt with the humour of excessive wealth; and note how it dealt with the humour of schools and of Dons. One might almost define it by negations. There is in all of it no–but here I lack a word…. When things ring false it is because they have got by exaggeration or by some other form of falsity beside themselves. Appreciation of rank or even of worth becomes snobbishness; appreciation of another’s judgment false taste; and patriotism, the most beautiful, the noblest, the most necessary of the great emotions, corrupts into something very vile indeed. 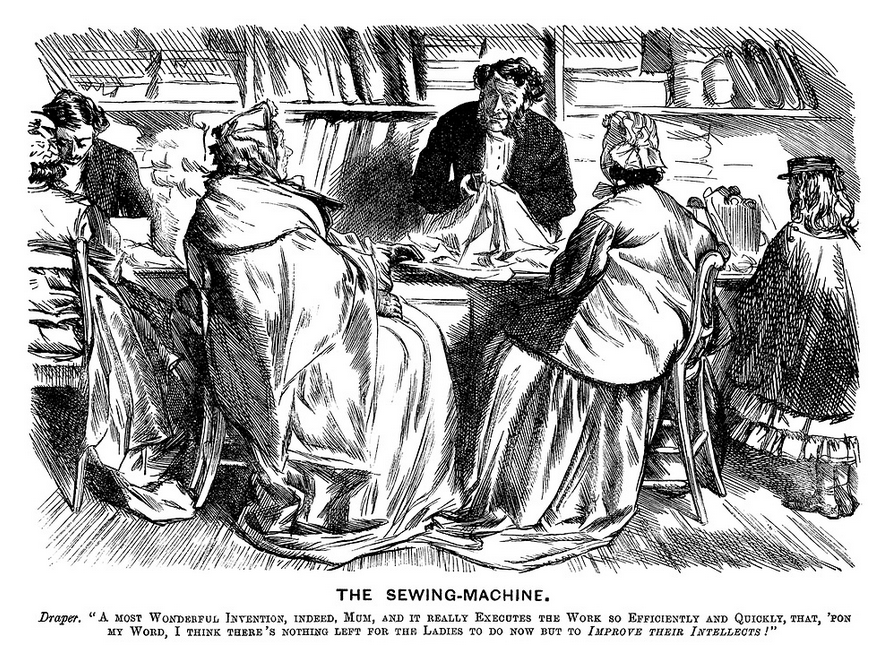 Well, the Victorians, and notably this man of whose power of the pencil I am speaking, did lack that false savour, that savour of just missing what one wishes to say or to feel, which haunts us to-day; and I should imagine that whether it were cause or effect the salt present in the preservation of the moral health of that society was humour. Let us enjoy it like an heirloom. It is more national than the language; at least it is more national than what the language has become under foreign pressure; it is infinitely more national than our problems and our tragedies. It is so national that–who knows?–it may crop up again of itself one of these days; and may that not be long.

Video: Start Your Own Plant Nursery