From “The Bestiary” in Medieval English Verse and Prose by Roger Loomis and Rudolph Willard, submitted by Hoosier Hillbilly.

The Whale’s Nature
The great whale is a fish,
The greatest that in the water is;
Thou wouldest say, indeed,
If thou were to see it when it floated,
That it was an island
Stationed on the sea-sand.

This fish, which is enormous, 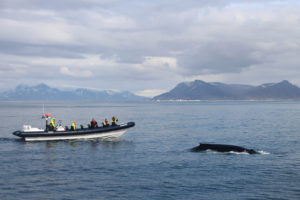 When he is hungry, gapeth wide;
Out of his throat there rusheth a breath,
The sweetest thing that is on land;
For this, other fishes draw to him;
When they smell it, they are delighted;
They come and hover in his mouth;
Of his trap they are unwary.
The whale his jaws then locketh,
All these fishes in he sucketh;
The small he will thus entrap;
The great he may in no wise catch.

The fish dwelleth on the sea bottom,
And liveth ever hale and sound,
Till there cometh the time
When the storm stirreth all the sea,
When summer and winter contend.
He cannot dwell therein,
So troubled is the sea’s bottom
That he cannot remain there that time,
But he cometh up and floateth still,
Whilst that weather is so ill.

The ships that are storm-driven on the sea,
Death is loath to them, to live is dear,
They look about them, and see this fish;
An island they suppose it is.
For that they are grateful,
And with all their might thereto they draw
The ships to anchor,
And they all go ashore.

From stone and steel in the tinder
They kindle a fire on this monster;
They warm them well and eat and drink.
The fire he feeleth and maketh them sink;
At once he diveth to the ground,
And destroyeth them all without a wound.

Signification
The Devil is great in will and might,
As witches are in their craft;
He causeth men hunger and thirst,
And many another sinful lust;
He draweth men to him with his savor;
Who followeth him, findeth shame.
Those are the little ones in the faith’s law,
The great to him he cannot draw;
By the great I mean the steadfast,
In true belief, in flesh and spirit.

Who listeneth to the Devil’s lore,
At length he shall rue it sore;
Whoso fasteneth hope on him
Shall follow him to hell so dim.

The Ballad of Amanda Robb