This fight song exemplifies what high school athletics were once about. The song was most commonly associated with football. It is about the team, the students and the community coming together to compete, cheer and support the students in all their various parts of the game. The cheerleaders and majorettes would dance their routine as the band would play. The football team would stand or go for the points after a touchdown, depending on why the song was being played.
Today, if you show up for a football game in this town, you would hear about the Maroon and Gold. You just wouldn’t see much of it. The band, which has a winning tradition, they are going to state competition this year for example, is still decked out in their maroon, gold and white. The football team and the cheerleaders, not so much. You see, someone has decided that black and gold looks so much better. So, the cheerleaders and football team wear black uniforms with gold, and some maroon accents on them. This upsets some of the older members of the community. The Athletic boosters and school administrators do not care. The Beach Boys would be very sad.

Over the last 2 years, there has been a lot of discussion about why the kneeling NFL players have caused such a visceral reaction among fans. Many have spilled digital ink over this issue. I have refrained because there was little that I felt I could say that had not already been said. After finding out that my ole high school was not the only one abandoning our school colors, and that I was not the only one bothered by this disregard for our colors. I saw something in the NFL protests that I had not seen before.
As the Ancient Roman Empire began to collapse, there was an abandoning of an important tradition. In the earliest times of Rome, the male citizens would spend time in military service. This provided a source of pride, comradery, and a sense of ownership in the future of what they were building through conquest. As these men spent time together, fought together, buried their friends and celebrated their victories together, a real sense of purpose was born. They were not out to pillage and destroy. These men were conquerors. They were building roads, communities, aqueducts and a legal framework that were expandable. Then, as time went on, some began to view military service as not that important. They stopped serving in the military. What was the point anyway? Hadn’t Rome conquered the known world? Didn’t Rome have an unending amount of wealth and knowledge at her fingertips? To fill out the necessary military ranks, barbarians were hired to serve. Military discipline was not as good. Infiltrators moved in and betrayed the Romans. Borders were weakened. Outlying areas realized they could pay the same barbarians directly to protect them. Cutting out the high taxes being paid to the Romans.
In “The White Rose” by Inge Scholl, a story is told about Hans Scholl. While he was in the Hitler Youth, he became a leader of his subgroup of young men. They worked diligently to make a flag for their subgroup. He and the other young men were very proud of their flag. It was different from the flag for the overall Hitler Youth. That was unacceptable, so the leaders of the Hitler Youth over his subgroup came and destroyed that flag. The young men who were following Hans did not want to surrender their flag, with their colors, made from their hard work. None of that mattered. In the end, the flag was destroyed, the young men were disillusioned. Hans would eventually be murdered by the Nazi government for writing pamphlets that challenged the Nazis. 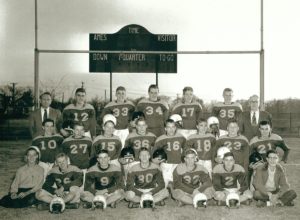 What does any of this have to do with football, in a town in Texas or the NFL you ask? Well, it is something like this: As a culture we have traditions. Those traditions are built from many different things. Do you put beans in your chili and try to pass that spicy stew off as the real thing? Do you put ketchup and mustard on your hot dog, sauerkraut and onions, or do you have no intention of eating a dog, hot, cold or otherwise? Is your town a football town, a basketball town, a band town or some combination of these? Does your town have multiple high schools that compete for the loyalty of the community? Was your town built on a local steel mill, paper mill, oil refinery, car factory or textile mill? Are those businesses still up and running today?
Honor is something we have difficulty with in the USA today. It is not something that is spoken of well. It is still an important part of our military branches, but for how long? If you go to a public school and speak to the students, how many of them could articulate what it means, how it is shown or why it is important? One way to understand honor, is that it means you hold things in their proper esteem. You show it by keeping the traditions of your culture. It is important because it helps you to know your place within society, to anticipate the responses of others and to have a shared experience with those in your community.
Now, let’s tie these seemingly unrelated stories together to frame the NFL controversy in a new light. When the Ancient Romans began to ignore their traditions of military service, one of the cohesive elements of their society died. The barbarians came in to fill the empty places in the military, and the whole civilization collapsed. In the Hitler Youth, the individualism of the small group of men was aggressively stamped out by the leaders and organizers of the overall group. No individualism is to be allowed or encouraged among the larger community. Everyone must be a homogenous and interchangeable part of the whole.
Today, in local high schools, the unique colors of our communities and schools are being removed. By rule, one team is to wear a dark jersey the other is to wear a lite jersey. Black is a cool looking color to have for your dark jersey, why should we care that our town has traditionally been maroon, blue, purple or green? Why honor the traditions of our forbearers who built the town? Why should NFL players respect a National Anthem for the USA? Why honor the traditions of our forbearers who built this nation? Why leave up the statues of a bunch of men who fought a war against this nation? Why honor those who fought bravely for what they believed was the foundation of this nation, the right to self-determination by the states?
When a community abandons her traditions, and refuses to honor that which came before, barbarians will destroy the civilization. They will gain the levers of power one way or another. The barbarians will tear down that which came before them, because it is not their culture. Those are not their forbearers, and this is not their civilization.
Listen to that Beach Boys song again. Are you being true to your school, your community, your nation, or your forefathers? Are you standing up for your colors?  Do you now understand why taking a knee is such an insult to so many who do value our nation?

When Is Enough, Enough?