Editor’s Note: This was originally published by Daniel New at his website.
There are two schools of thought about where warriors come from.  One says they are born, the other says they are made.  And perhaps there is some truth to both theories – maybe those who are latent warriors never show it until they have to.  In the end, it doesn’t matter how, it matters that there is a vast difference between being a soldier and being a warrior.
In researching this topic, I found a lot on the internet, and most of it is drivel.  Some of it’s funny, most of it’s baloney.  A lot of definitions imply that a soldier is one who is disciplined and obeys orders, while a warrior is one who will break from discipline, who will disobey orders, who will fight in his own way, and frequently only for his own glory or benefit.  Several of the sources seem to confuse the term “warrior” with “mercenary”. Many equate “warrior” with “barbarian”. This is a mistake. 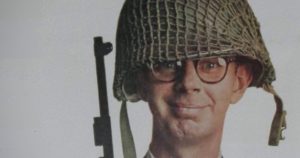 Not all soldiers are warriors, that’s for sure.  Most soldiers wear a uniform and see their term of service as a job.  Perhaps they want certain occupational training, or maybe they see it as a way to get GI benefits for college later, or in many cases they enlist because they can’t find a job.  And, just as it is in the civilian world, some are good soldiers, some are not.
When soldiers go out on patrol, a good many of them pray to God that they will not find the enemy, that he will not find them, and that they will make it back to the base unharmed.  Can’t blame them, it’s dangerous out there, and they didn’t ask for this.
The warrior, on the other hand, at some point along the way, has developed a mindset that when he goes out on patrol, the enemy has a problem, and he’s it.  He looks forward to taking the fight to the enemy, with a view to making the sure the enemy doesn’t make it home for supper.  And he loses no sleep over what happened on patrol (unless it was the stupidity of some second lieutenant fresh out of ROTC).
While most mercenaries may be warriors, and most soldiers may not be, the two are certainly not synonymous.  One may be an excellent soldier and still not be a warrior, or he may be a soldier who is a well-disciplined warrior, serving well under a chain of command.  The warrior will normally be “gung-ho” in his training and in his outlook on life, with little patience for those who are not.  He knows that if he looks to those who are not warriors to protect him, he will find himself alone on the battlefield.  So he tends to avoid close friendships with non-warriors.  On the other hand, he often forms very strong bonds of brotherhood with the few he recognizes as fellow warriors.
It is rare to find a warrior who has the understanding of when to pick his battles, when to risk his career to do what is right.  And this is why they have the reputation of being undisciplined – they will resist many things that seem inconsequential to others.
Among the Field Training Manuals given to every soldier in Basic Training is one that deals with Leadership.  In that manual is a brief discussion of what to do if you are given an illegal order.  It says, “Do not make it easy for others to do what is wrong.”  It tells the soldier that there may come a time when he may have to refuse to obey an order that he is convinced is contrary to the law.  It also makes it clear that to disobey that order may cost him his career, and even worse.  “If you disobey an order, you do so at your own peril.”
This doctrine is not only taught in Basic, but it’s taught at West Point to future officers, and it’s taught at every military academy in the country.  It has been taught from the time when George Washington was our first commander in chief until today.  One may have to defy delegated authority in order to do what is right.
Most soldiers will never disobey an illegal order.  Normally, having been conditioned to obey all orders, and promptly, they will “go along to get along.”  And it’s not normally a big deal.
The warrior often finds it very difficult to play that game, and he often finds himself struggling with whether he is willing to stifle his conscience and submit to wrongdoing.  He’s committed to the overall mission, or he wouldn’t be there.  But he’s not committed to compromising when principles are involved, no matter who gave the initial order.
Not all battles, however, are fought on the battlefield.  The warrior mindset exists in the civilian world as well.  We find men and women who have never been in uniform who are committed to doing that which is right, no matter what.  They will lose jobs over issues no one else ever paid any attention to before.  They will crusade for political candidates who have no hope of winning.  As youngsters you see them on sports teams, battling against all odds, and if their team loses, taking the blame because they didn’t do more.
This mindset is one to be desired, and sought for in employees, as well as in soldiers – but only if discipline can be instilled from the beginning.  The undisciplined warrior is, indeed, little better

than a Viking berserker.  But the disciplined warrior makes every team stronger, a thing to be feared by the enemy.
This is true of military officers, of civilian managers, and of parents and teachers.
Those of us who are warriors should seek discipline, not only of our own bodies and skills, but to learn the value of teamwork.  Those of us who are not warriors need to learn to work with his strengths, to give him some space when he must have it, and yet to harness that indomitable will so that it serves the team well, not breaking the spirit, but channeling that energy and drive in the right direction.
We tell our children that they should not do what is wrong just because everyone else is doing it.  Do we really believe that?  If we do, then I suggest we also do our best to train them to be warriors.  The family will be stronger, the community will be safer, and our military will have warriors to protect us from those who are content to look the other way when crimes are being committed.