Pictures of dogs are now racist:

The union representing San Francisco police officers published a photograph of two dogs in its monthly newspaper that critics say belittles the Black Lives Matter movement and raises questions about the police force’s commitment to repairing its relationship with communities of color…
The photo weighs in on a controversy that has flared on social media and has animated political debates. Some people have countered the phrase “Black lives matter” by saying, “All lives matter,” and they in turn have been accused of objecting to a simple request that black people be treated fairly.

The truth is exactly the opposite. The reason BLM gets so angry about #AllLivesMatter is not that it treats them unfairly, but that it denies them snowflake status. And snowflake status is the currency of social justice. 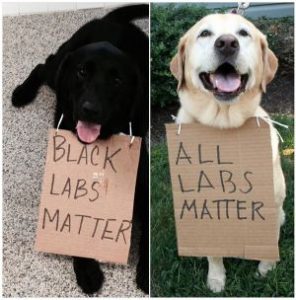 Think about it this way. Lots of people have their favorite cancer. This one is all about breast cancer and the other about ovarian cancer and the third about lung cancer. And they get along swimmingly because everyone gets to be special.
But what if someone were to come along to that happy little group, representing every type of cancer under the sun, and in response to appeals for awareness about this particular cancer or that one, that person just said, #AllCancersMatter?
Do you suppose the breast cancer lady would look around at all the cancers that matter and say, Hmmm…I guess you’re right?
Or would she hit the guy on the head with her sign because her mom DIED of breast cancer and HOW DARE you deny my lived experience and erase my pain you bigotsexisthomophobeshitlord?
I suspect the answer would far more often be the second.
It’s obvious that if black lives matter and blue lives matter and everyone’s lives matter* that All Lives Matter. But that’s not why people say it. They say it because those who request snowflake status under the guise of fairness are so triggered when it is denied.
* except the unborn, because Constitution.

Is This a Simulation?