“Senator Chuck Schumer is getting a taste of his own tactics. I mean, he’s not a stranger to these tactics. He has used them himself. I just find it fascinating he’s on the receiving end of them now. And, by the way, other Jewish members of Congress are also getting to one degree or another the same kind of treatment as Chuck-U Schumer is getting from the administration, from the Regime. Basically the attacks are all, “He’s not a loyal American! He’s a Jew first! He’s an Israeli Jew and he’s supporting the Jewish lobby.” It’s despicable. It really is.” – Rush Limbaugh

Quelle surprise!  Although the above quote and the event it references is nearly two years old, the lesson we should draw from it is timeless. Even a casual student of history should not be too surprised. The so-called “Emancipation” of the Jews began in earnest in the early nineteenth century in Germany with the ascendancy of the so-called “Reform” movement, and we haven’t recovered since. 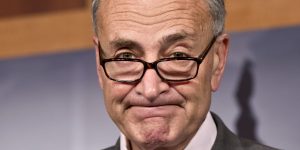 When will we learn how futile it is to cozy up to the nations, especially through the abandonment of the Torah and mitzvot, as the animosity of the nations is only increasing daily? It is an incontrovertible fact of history that wherever Jews have declared themselves ready to exchange Torah-observance for “freedom and social justice,” in the vain hope of achieving “equality” with and acceptance by the nations, they have inevitably waited in vain for the blessings of a “better time.”
Rabbi Samson Raphael Hirsch wrote in 1860: “Enmity and oppression continue, not because we are too Jewish and too committed to Judaism, but because we meet our Jewish obligations deficiently, indifferently, and frivolously.”  In R’ Hirsch’s 19th century Germany, the state tried to blur ethnic distinctions and bring about the disappearance of the Jewish people as a distinct national entity. In concert with this trend, the Reformers deliberately downplayed any national bond, choosing instead to reinvent themselves as “Germans of the Mosaic Faith.” The preference was not merely philosophical in nature, but largely informed their outlook on issues pertaining to the relationship of Jew and Gentile.
Foolishly, the Jew thinks that by changing his name and assimilating himself into oblivion that this will be his salvation when the nations become agitated. As Chuck Schumer and others are will inevitably discover, their assimilation and abandonment of God and His directives will inexorably lead to their downfall. When the state extends “freedom” to Jews, elevates them, and draws them close, the entire objective of the Jew must now be to become friendly with the powers-that-be and tread carefully in their [i.e. the state’s] ways, while renouncing their true calling as Jews.
What our people have so often forgotten is that that we are required to live in accordance with the Torah in whatever conditions we find ourselves in. We forget that the eternal lessons of the Torah are not connected with nor limited to any specific form of life in exile.  In other words, just as a Jew must be prepared to serve God by seizing upon any opportunities afforded to him by society to accomplish the mission God has given him in this world, so too he must serve God and fulfill his mission under any adverse conditions he may encounter among the nations to which he has been exiled.
And our mission is to bring about the revelation of God which can only be accomplished through the fulfillment of the Torah:

If the dispersed of Israel were quietly to flourish as the priests of God and true humanity, . . . if only we lived up to what we are supposed to be, if only our lives were a perfect reflection of the Torah, what a mighty force this would be for reaching the ultimate goal of all human education!  During the years of misery and contempt, our ideal could be attained only imperfectly; but when milder times beckon us towards our goal – that every Jew and Jewess, through the example they provide in their own lives, should become priests of God and of genuine humanity – and this ideal and mission await us, can we still deplore our fate . . .? (R’ S.R. Hirsch)

Chuck Schumer and his ilk worship any means to a comfortable life, which means a life that is free from the yoke of their calling; worship which, at the end of the day, only serves to engender renewed persecution and a deepening of the exile.  God will bring the exile to an end, one way or another, of that we can be certain. But a good part of the blame can be fairly placed squarely on the shoulders of Chuck Schumer and others (most notably organizations like the ADL), when oppressors stand ready to place the chains of Egypt on Israel once again.
Through their exaggerated glorification of assimilation, emancipation, and social justice they, rather than seeking the welfare of all the nations to which they have been scattered, will instead be found guilty of precipitating the ancient animosity of the nations. And we can be certain that the “not all Jews are like that” defense will do nothing to stem the tide of persecution and animosity that is poised to wash across this nation or any other nation to where we may have been scattered. When nations are pushed to brink and no longer willing to tolerate the guests whom they perceive has the cause of some or all of their ills, real or imagined, they will not take the time to discriminate between a “good Jew” and a “bad Jew”.
Non-observance and assimilation are anything but a cure for the anti-Semitism which is so-often lamented in various parts of the world.  Far from being the cure, assimilation is really the cause.  The persecution of the Jews that is coming will not spare the Chuck Schumer’s of the world and those who have labored so assiduously to live non-Jewish lives. I am convinced that the only result of deviating from a life that is seriously committed to Torah observance and mitzvot, while embracing assimilation will only be continued suffering, persecution, and hatred, which is precisely what is guaranteed by the Torah and the Prophets in exchange for our stubborn insistence on rebelling against the Divine imperative.
What is despicable is not so much the way Chuck Schumer was treated, (in fact, this is to be expected) but why he was treated this way. It is our rebellion and obsession to imitate the abhorrent practices of the nations around us which got us kicked out of our land in the first place. What do we expect when we perpetuate more of the same everywhere else in the world and cause His Name to be further blasphemed among the nations to whom we owe a debt of gratitude and continued service? The question the Jew should be asking himself is “Am I good for the Goyim?”
What is remarkable, is that somehow God will use the subsequent persecution, of which we ourselves may be the authors, to cause many of us to return to the land where the Scriptures say He will remove our heart of stone and replace it with a heart of flesh to love Him and serve Him as we have been called to do. God will have His way, draw us back to Himself, and not abandon His inheritance despite our best efforts to forfeit and forsake that gift which He has so graciously bestowed (cf. Psalm 94).
In the meantime, we would do well to remember the example of Joseph, Daniel, Mordechai, Esther, Shadrach, Meshach, Abednego, and others who all remained committed and faithful to the Divine imperative and were rewarded accordingly. We should also remember that our reward may not entail being elevated to the highest political office in the land, but rather being afforded the greatest opportunity anyone can hope to enjoy in this world: al kiddush Hashem, sanctification of the Name.
Even if Chuck Schumer refuses to acknowledge it, disputes it, despises it, or downplays it, God will see to it that even the world, yes, even the very nation, whose interests he believes he has so dutifully served and is even now trying to serve, will remind him, one way or another, that “He’s a Jew first.”

How to survive and move on from a feminist single mother