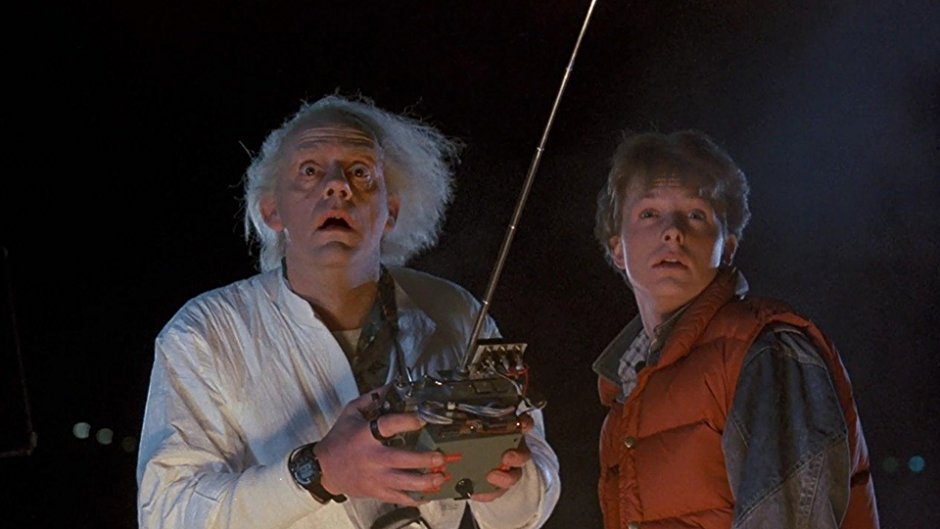 I was sitting on the toilet recently, reading an article on my phone about how Bradley/Chelsea Manning/Womanning is planning to run for Congress, and I slipped and hit my head on the edge of the sink. When I came to, I had a revelation…
Great Scott… Modern life is garbage!
Have you ever yearned for a simpler time? A time when men were real men, and women were real women, and you could peacefully enjoy a poop (a real poop) in peace without your ablutions being disturbed by news stories about Gollum-featured trannies unironically running for high political office with the subtext that you’d better vote for xir or you’re a transphobe?
And what the hell is a transphobe, anyway? I’m not afraid of Optimus Prime.
Anyway, simpler times. Similarly, remember when bands were real bands, and not the “dub-step” or “rapping music” or whatever the hell it is the young people listen to these days? Here’s just a selection of the alleged artists in the Top 10 at the moment:

As a heterosexual grown man, I’m proud to say I’ve never listened to any of these idiots or their records and/or cassette tapes, but I can tell you with 100% absolute certainty that they sound exactly like a feline orgy inside a cement mixer, which is appropriate because they probably got their stage names from cats walking across the keyboard at random.
Remember when musicians used to have real names, such as Huey Lewis and the News? Back To The Future remembers.
So what makes BTTF so great?
1) The 80’s were awesome
Much like Luke Skywalker’s favorite alien titty-cow in The Last Jedi, 80’s nostalgia has been overmilked lately. Which is unfortunate, because when something is reduced to cliché we tend to forget what made it special in the first place.
Although most of the film is set in 1955, it’s very much a product of the early-to-mid 1980’s and Canadian star Michael J Fox plays the laid-back, optimistic, can-do 80’s American teenager to feathery-haired perfection.
What would a Millennial do if they got sent back in time to the 1950’s? Probably whine about the lack of cell phone reception and then passively wait for their parents to pick them up.
Marty McFly is from a more heroic era though, so after being temporally displaced he gets into fist-fights with bullies, makes sure his dad gets laid, invents skateboarding, figures out a way to help his friend Doc Brown defeat Libyan terrorists, and hops back to 1985 for a bit of sleep before heading out in his brand new pickup truck with his smoking hot girlfriend.
1985 Hill Valley is a long way from utopia, it’s noticeably dirtier than it was in 1955 for one thing. But compared with the taco-infested, street-shitting, bindified, HIV-friendly, Alt-Left hellhole that California is today, Hill Valley looks like Little House On The Prairie.
2) It’s about rescuing your father 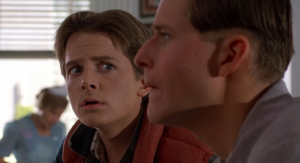 Dr Jordan Peterson talks about rescuing your father from the belly of the beast. He means it in a metaphorical sense, in relation to translating, transforming and transmitting culture. But it also works literally as a compelling storyline.
Family is the ultimate human interest story, because it’s the reason we’re here. It’s no coincidence then that themes of family strife, reconciliation, and inheritance play such a big role in some of our most beloved works of fiction. Star Wars – the real Star Wars, not the crappy Disney version – centres around the Skywalker clan in general and how Luke redeems his father from the Dark Side in particular. In BTTF, Marty – who at one point introduces himself as Darth Vader – must rescue his father from the dork side to ensure he gets the girl and fulfils his destiny to become a dad.
It’s a much smaller and more lighthearted story than the galactic vistas, Imperial superweapons and mystical forces of Star Wars, but the stakes are just as deadly serious: if Marty fails, he and his siblings will never be born. And there’s a good lesson for young men: in the original timeline, where Lorraine ends up with George out of pity, his life sucks, he’s still picked on by his high school bully, and his kids don’t respect him. In the best possible timeline, after Marty’s intervention forces George to stand up for himself and fight like a man, he not only gets the girl, but ends up much happier and more successful as a result. Because Kenny Rogers was right.
3) The power of friendship
Male bonding is something that seems to have gone out of style in these estrogen-drenched, toxic-masculinity-decrying times with our internet-mediated ersatz relationships and solipsistic entertainment media. But no man is an island, as John Donne explained back in 1624. Whether it’s a drinking buddy, a fishing pal, or an eccentric time travelling inventor played by Christopher Lloyd, male friendships are important and enriching.
As Bill Withers put it:

The emotional heart of BTTF is the unusual friendship between Marty and oddball freelance scientist Dr. Emmett Brown. It’s not a mentor-student relationship like that of Obi Wan and Luke Skywalker, nor is it the officer-enlisted man dynamic of Frodo and Samwise. Marty and Doc are presented as equals – a likeable teenager and a young-at-heart tinkerer who are united in their boyish enthusiasm for gadgets and adventure.
Which is another totally 80’s flashback that is sorely missing from today’s culture. Like Star Wars, Indiana Jones, Ghostbusters, and many other popular movies, the Back To The Future films were unashamedly about boys doing boy stuff and having boy’s own adventures. It wasn’t the The He-Man Woman-Haters Club – they had their Leias and their Lorraines too – but the central focus of those stories was masculine risk-taking and defying the odds.
Modern-day Hollywood would rather push obnoxious girl power messages and ridiculous plots about 90 lb butt-kicking babes beating up the bad guys because everything has to have feminism in it for Joss Whedon to maintain an erection.
Back To The Future had none of that, it just wanted you to have a good time.