Behold, my first review on that site:
If you were an actual story, my love, you would have a plot, that structure of narrative points that makes a tale comprehensible. It might be a light and airy plot, like the joyful flight of a lark on a clear summer morn. Or it might be dark and dreary, the slogging of the last dragon, dying in an endless slough. But it would not be hidden away from sight, beneath paste and powder, like a pimple on prom night.
If you were an actual story, my love, you would have characterization. Some of your characters might be good people (or even dinosaurs, brrrr…) that sometimes do bad things if even for good reasons. And a few might even be bad people who do good things on rare occasions. But they would never be limited to cardboard victims and free-floating Hitler mustaches drawn in crayon.
If you were an actual story, my love, you would reward the reader for the small portion of his life he invested in you. You would never drive him to check his watch, first every stanza, then every sentence, then every blank space that appears, like a cool desert oasis, between each tiresome word. You would never make a thousand words seem as wearisome as a thousand years on the rack, nor feel as appalling as a thousand maggots burrowing out of the reader’s living belly. 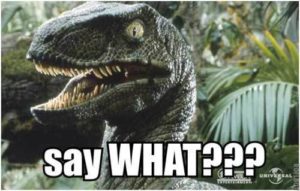 If you were an actual story, my love, you would read and feel nothing like “If You Were a Dinosaur, My Love.”
After posting, it didn’t take many days to receive this:

Hi [El Borak],
Your account was recently brought to our attention. Upon review, we have decided to remove it from the site. You are banned from using Goodreads in any capacity going forward.
Sincerely,
The Goodreads Team

I guess they liked it.
Now, do I know for certain that my sarcastic 1-star review of the critically-acclaimed, award-winning pile of horseshit that was Rachel Swirsky’s “If You Were a Dinosaur, My Love” was what got me banned? Of course not. They never said. It might have been the company I kept. It might have been that my own books* contained something that set off some blue-haired land beast. Who knows? I certainly don’t. And that’s the point. While SJWs love to publish rules and “Term of Service” and “Codes of Conduct”, they don’t actually need them once they have gained control of any organization.  If someone brings you to their attention as a badthinker, you’re gone.
It’s one more illustration of a million why we (and especially YOU) need to get on board to support alternative information and communication platforms. Support Infogalactic. Use Brave as a browser, Duck Duck Go as a search engine**. Get the hell off Facebook. Stop feeding the Beast.
Once an organization has been SJW-converged, as Goodreads has long been, it is worthless for its current purpose, or any purpose but enforcing the Social Justice Narrative.  Push it over, and build something useful in its place.
*Which they still shill, perhaps unsurprisingly.
** And stop using “google” as a verb.

The Story of the Malakand Field Force (Part 1)