Editor’s Note: Another of our good friends has provided us an excellent article. We have known the Winged Hussar for a long time, and can verify that he is a true Man of the West. You would do well to listen his his admonition.

Now, the topic of biblical manhood is one that gets covered often enough in churches today, but the church today isn’t the church of yesterday. A Google search on biblical manhood will return a plethora of articles outlining the modern church’s model of biblical manhood. A brief glance over most of these articles should be enough to make it clear that the modern church is effeminate. Either pastors believe that nonsense, are afraid to say otherwise, or it’s just not popular to preach a sermon on manhood today without painting a portrait of Ned Flanders as the quintessential male role model of Christian faith. 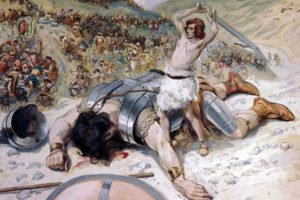 Like I said earlier, everyone with a penis is a male, but….not everyone with a penis acts like a Man.  So what does God look for in a man? We get a good insight from biblical history. Take a look at this guy, probably my favorite biblical character, since he is the one of the biggest screw ups in the Bible, but God showed him favor like he showed few other men in the Bible: King David, a man God referred to as a “man after His own heart.” David killed a giant when he was still just a wee lad. He also killed Uriah so he could marry his wife (that’s gangster). But God was with David always, and even promised him that the Messiah would come from his line. God forgave David’s many sins, and gave him victories in the face of tremendous odds. What was it that God found in David that He showed him such favor? Was it because David was a great husband, and served his wives? (of which there were at least eight, and who knows how many concubines). Because he turned the other cheek? Because he was a really friendly neighbor? Because he was gentle and politely spoken?

No, David was a man after God’s heart because:

Observe the story of David and Goliath.

Goliath was a giant of a man, standing approximately 9 feet tall, he wore a breastplate that weighed approximately 125 lbs, and his spearhead weighed 15 lbs.

This guy was a Nightmare.

Twice a day for 40 days, Goliath, the champion of the Philistines, comes out between the lines and challenges the Israelites to send out a champion of their own to decide the outcome in single combat, but Saul and all the Israelites are afraid. David, bringing food for his elder brothers, hears that Goliath had defied the armies of God and of the reward from Saul to the one that defeats him.

David goes to Saul for permission to confront Goliath, but Saul initially rejects David due to his stature. David’s replied:

“But David said to Saul, ‘Your servant used to keep his father’s sheep, and when a lion or a bear came and took a lamb out of the flock, I went out after it and struck it, and delivered the lamb from its mouth; and when it arose against me, I caught it by its beard, and struck and killed it. Your servant has killed both lion and bear; and this uncircumcised Philistine will be like one of them, seeing he has defied the armies of the living God.’ Moreover David said, ‘The LORD, who delivered me from the paw of the lion and from the paw of the bear, He will deliver me from the hand of this Philistine.’ And Saul said to David, ‘Go, and the LORD be with you!’” (1 Samuel 17:34-37)

David and Goliath confront each other, Goliath with his armor and javelin, David with his staff and sling. “The Philistine cursed David by his gods”, but David replies: “This day the LORD will deliver you into my hand, and I will strike you down; and I will give the dead bodies of the host of the Philistines this day to the birds of the air and to the wild beasts of the earth; that all the earth may know that there is a God in Israel, and that all this assembly may know that God saves not with sword and spear; for the battle is God’s, and he will give you into our hand.”

David hurls a stone from his sling with all his might and hits Goliath in the center of his forehead, Goliath falls on his face to the ground, and David cuts off his head. The Philistines flee and are pursued by the Israelites “as far as Gath and the gates of  Ekron”. David puts the armor of Goliath in his own tent and takes the head to Jerusalem.

God worked with men, and he expected them act like men, and he even commanded them to act like men. Joshua 1:9: “Have I not commanded you? Be strong and courageous. Do not be frightened, and do not be dismayed, for the LORD your God is with you wherever you go.”  Being strong and courageous doesn’t mean having zero fear; it means doing what has to be done in spite of your apprehensions or doubt.

Remember also, God has a special place just for cowards.

“But as for the cowardly, the faithless, the detestable, as for murderers, the sexually immoral, sorcerers, idolaters, and all liars, their portion will be in the lake that burns with fire and sulfur, which is the second death.” (Rev. 21:8)

Everyone has fear, and everyone experiences doubt.There is no magic bullet that will cure fear, but YOU CAN change how you handle your 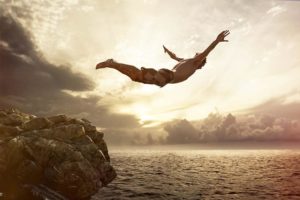 fears. Fear can be paralyzing, but it can also be the strongest catalyst for change. The difference between a hero and a coward is which way you run when the shit hits the fan.  It’s the difference between being the weird little boy who was unpopular, sexually abused, picked on, and afraid of his own shadow, and the lion no one wants to poke when he’s sleeping.

When the fear of remaining as you are becomes greater than your fear of rejection, failure, or whatever it is that stands between you and where you need to be….you’re ready to begin the process of change. It takes a conscious effort to resign yourself to whatever may come, stride forward, take it on the chin,and push through till victory is yours. But in time, it becomes who you are, and fear becomes fuel.

So by all means, honor your wife, deal kindly with your children, provide for your family, and be charitable to your neighbor..but first and foremost, BE A MAN!

One final note. Can we stop using the term “masculinity” near constantly because it sounds gay. I’m not 100% sure what “toxic masculinity” is, but I’m 99% sure it will give you AIDS. You know who uses words like masculinity? Any guy who subscribes to the $1 shave club, grows a beard to look like the brawny paper towel guy, and wears skinny jeans. So, stop using the word “masculinity.” It’s gay. Do you want to be gay? ‘Cause that’s how you become gay! Just be a man.

"The Diabolist" by G.K. Chesterton