Editor’s Note: Here, we present a guest post by our good friend, and Man of the West, The Argonaut. He gives us another perspective (from outside the U.S.A.) on recent events. For the record, the term “own goal” refers to the scoring of a goal against your own team in soccer.

It was fascinating watching the recent riots at Milo Yiannopolis’s final leg of the Dangerous Faggot tour at Berkely University. The site of black clad “Anarchists” setting fires and attacking people in an effort to silence the speech of the acerbic but reasonable Yainnopolis. Milo has a way with words and enjoys stirring the pot, but his actual message is fairly standard conservative fare that wouldn’t be out of place on any centre right discussion. Why the anarchists felt the need to suppress the speech of a Jewish homosexual is something I don’t really understand. By the standards they would apply to anybody else this is pretty much a textbook case of homophobia and racism expressed in the most odiously fascistic way possible. The irony of them calling themselves “anti-fascists” just lends the whole tragic mess a certain dark comedy.
Now for me, where the whole thing transcends the merely darkly comedic and moves into the surreal is the total failure of  “Antifa” to achieve their goal and instead by their actions turn it into a total victory for their opponents. Leaving aside the repulsive behaviour on display and the general revulsion all sane individuals have for riot and mayhem like this, it has directly lined the pocket of many people. 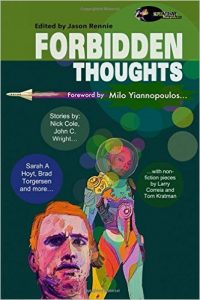 It wasn’t lost on many people that Milo’s forth coming book Dangerous shot back up to the #1 Amazon spot. However it hasn’t only been good business for Milo’s publisher Simon and Schuster. I have some connection with a small press that recently put out Forbidden Thoughts, a collection of science fiction tales that hope to act for the most part as a warning akin to 1984, and Milo was kind enough to write the foreword. The press saw the best few days sales since the initial rush releasing the book a week ago. Vox Day, author of SJW’s Always Lie, apparently also saw a spike in traffic. Forbidden Thoughts was given a nice boost back to the top of the various Amazon science fiction sections. We couldn’t have bought that sort of publicity, but our enemies gave it to us for free.
What could Antifa possibly have hope to achieve? Make Milo a household name in the US? Make sure everybody on Amazon who can list Milo as any sort of an author credit makes a pile of money?  Drive even more people to be exposed to his ideas and live streams on YouTube? Increase Breitbart’s readership even further?
For all their control of the culture, the current left seems singularly inept at succeeding in its expressed goals recently. Everything they seem to do lately does more harm than good. The various unhinged celebrity rants seem to be just alienating fans, the left news sources telling half and whole truths keeps being exposed and shredding their credibility further, and the riots are just pushing every sane person away from them.
Various unhinged people like Cenk Uygur and Robert Reich have suggested the Berkeley riots were a false false flag operation (Which I suppose is easy to claim when they hide their faces), but even that narrative is crumbling as one of the rioters has been identified as a Berkeley staff member due to a distinctive neck tattoo that was seen. The only thing going in favour of the notion of  false flag is that the whole thing was such a spectacular own goal by the activists.
I can’t complain I suppose. The sooner the nihilistic death cult of hard leftism finally ends up on the scrap heap of history the better.

Anglo-Dutch Conflict in the Colonial Era