Editor’s Note: We have another post by our friend, The Argonaut. You can read his earlier contributions to this site here.

There was an interesting article in LEO Weekly  that is apparently from a BLM activist with 10 demands of white people. It is a weird article, and the list of demands are broken into two halves. The first half of the demands revolve around willing property to “minority people” (As far as I can tell, she means “black people” when she says that) in an effort to help these minority people, or otherwise provide them with a home they can call their own for free. The second part revolves around trying to get “racists” fired for being “racists,” whatever that word means these days. I’m not sure how she expects this white person to keep underwriting with tax dollars the welfare programs that the blacks in generational poverty rely on, but I don’t think she has really thought any of this through much at all.
So why am I talking about this? As I said, I thought it was an interesting article that reflected a strange disconnect from reality for the BLM activist. Now first up, if I actually thought willing a property to a black family (or a white family or anybody) in generational poverty would actually help them, I’d probably at least consider it. 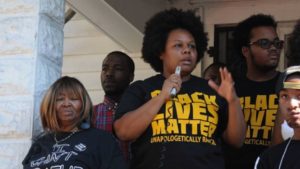 The problem is I don’t actually think giving a family home to a black family in generational poverty would help them at all. I gather the activist has never actually owned a home herself because I can tell you from experience, even without a mortgage on the property, owning a house is far from free. There are rates and taxes to be paid on a property to the local government, and on top of that, there is just ongoing maintenance costs for a property that take time and money to keep the property from falling into disrepair. Even without the burden of a mortgage, a poverty-stricken family is probably very quickly not going to be able to afford the upkeep on the property and will then lose it. In the end, they will still not own a property, but will now have a ruined credit score and a bankruptcy to go with it. Who does that help? She also suggests that developers should be building apartments and letting black people live in them for free, but who is paying for all the maintenance on such a property? The building superintendent isn’t free either, and someone has to pay them.
She makes a big deal out of generational poverty in the article and constantly suggests giving free homes to those in this situation. Leaving aside my initial problem with the idea, it does nothing to address the problem of why blacks suffer so overwhelmingly from generational poverty. As hard as it will be for her to hear, much of the generational poverty that is in the black community in the United States (as it is in many of these grindingly poor communities in America) is chosen. Blacks in America have an illegitimacy rate north of 80%. No amount of giving houses to people addresses that problem, nor does anything to curb it, and being raised in a single parent family is generally a recipe for such poverty and all manner of social ills. Why don’t we fix this problem, so we don’t need to give people houses. If the problem was solved, they will be stable enough to afford the h omes themselves. Surely that is a better solution.
Finally, another reason that her idea should be rejected (apart from it not working, not addressing the actual source of the problem, and also exhibiting an insane amount of entitlement) is that I doubt this activist is going to stop calling me in particular, or white people in general, racist if we did this, even if we did it in large numbers. Not to quibble, but why would I want to help an ingrate? If you are going to call me a racist whether I help you or not, it is cheaper to not help you.
I’d rather not be called a racist, but apparently that option isn’t on the table. So there isn’t really any incentive for me to help at all, even if I didn’t think doing so would actually be counter productive.

Video: How Then Should We Live? – Part 5

On Racism in America