Editor’s Note:  The following is excerpted from Plutarch’s Life of Caesar (Dryden’s translation as revised by A. H. Clough, published 1905).

After Sylla became master of Rome, he wished to make Caesar put away his wife Cornelia, daughter of Cinna, the late sole ruler of the commonwealth, but was unable to effect it either by promises or intimidation, and so contented himself with confiscating her dowry.  The ground of Sylla’s hostility to Caesar, was the relationship between him and Marius; for Marius, the elder, married Julia, the sister of Caesar’s father, and had by her the younger Marius, who consequently was Caesar’s first cousin.  And though at the beginning, while so many were to be overlooked by Sylla, yet he would not keep quiet, but presented himself to the people as a candidate for the priesthood, though he was yet a mere boy.  Sylla, without any open opposition, took measures to have him rejected, and in consultation whether he should be put to death, when it was urged by some that it was not worth his while to contrive the death of a boy, he answered, that they knew little who did not see more than one Marius in that boy.  Caesar, on being informed of this saying, concealed himself, and for a considerable time kept out of the way in the country of the Sabines, often changing his quarters, till one night, as he was removing from one house to another on account of his health, he fell into the hands of Sylla’s soldiers, who were searching these parts in order to apprehend any who had absconded.  Caesar, by a bribe of two talents, prevailed with Cornelius, their captain, to let him go, and was no sooner dismissed but he put to sea, and made for Bithynia.  After a short stay there with Nicomedes, the king, in his passage back he was taken near the island of Pharmacusa by some of the pirates, who, at that time, with large fleets of ships and innumerable smaller vessels infested the seas everywhere. 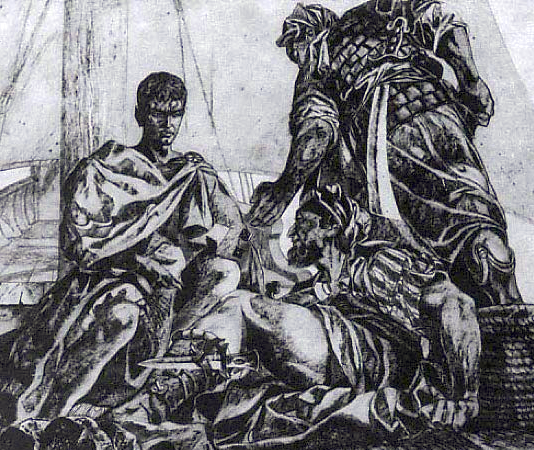 When these men at first demanded of him twenty talents for his ransom, he laughed at them for not understanding the value of their prisoner, and voluntarily engaged them at fifty.  He presently despatched those about him to several places to raise money, till at last he was left among a set of the most bloodthirsty people in the world, the Cilicians, only with one friend and two attendants.  Yet he made so little of them, that when he had a mind to sleep, he would send to them, and order them to make no noise.  For thirty-eight days, with all the freedom in the world, he amused himself with joining in their exercises and games, as if they had not been his keepers, but his guards.  He wrote verses and speeches, and made them his auditors, and those who did not admire them, he called to their faces illiterate and barbarous, and would often, in raillery, threaten to hang them.  They were greatly taken with this, and attributed his free talking to a kind of simplicity and boyish playfulness.  As soon as his ransom was come from Miletus, he paid it, and was discharged, and proceeded at once to man some ships at the port of Miletus, and went in pursuit of the pirates, whom he surprised with their ships still stationed at the island, and took most of them.  Their money he made his prize, and the men he secured in prison at Pergamus, and made application to Junius, who was then governor of Asia, to whose office it belonged, as praetor, to determine their punishment.  Junius, having his eye upon the money, for the sum was considerable, said he would think at his leisure what to do with the prisoners, upon which Caesar took his leave of him, and went off to Pergamus, where he ordered the pirates to be brought forth and crucified; the punishment he had often threatened them with whilst he was in their hands, and they little dreamed he was in earnest.