There was a movie that came out a few years ago, The Finest Hours.   If you have not had the chance to see it, then you should take the time and put it on the old TV.   We often see “based on a true story” or “inspired by true events” tacked on to the begining of various Hollywood clunkers. Usually, reality is stretched out and doesn’t live up to silliness on the screen.
In this case…  it is likely Hollywood that will be outmatched by the stupifying events that actually took place. 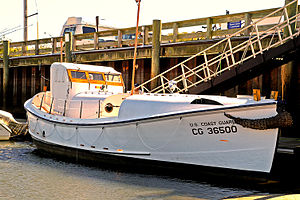 18 February 1952; two T2 tankers split in half in 40-60 foot seas off the coast of Cape Cod.  The Coast Guard rescued 70 men that day.
The photo above is of the little boat that went out in those seas, blinding snow, and near hurricane winds to rescue the men of the TS Pendleton.  The rescue boat was capsized several times, but it is a stubborn little bastard and kept righting itself.  The motor spent so much time upside down it would lose prime, and a crew member would have to climb back in there and restart it.   Think about that the next time you have engine trouble.  Try starting an unprimed diesel motor while being tossed around by 60 foot waves.
They were told to take this little boat out into the those seas, find a 500 foot tanker that had broken in half, and save the men on it.   They had nothing but a compass.  Think about that.  The sea had broken two 500 foot long tankers in half, and they were told to take this little wood boat out there and try to save those sailors.   Honestly, I have to believe the commanders gave the orders in jest, assuming the men of the CG-36500 would have sense enough to get lost out there and find their way back safe in a few hours.
If you were to ask me what my favorite branch of the military is, I’d think of the Air Force and the A-10… and the F-18s…  and all the cool toys…  and I’d think of the Navy and the even cooler toys… and the Marines.   And I would think of the Army…  the traditions of West Point… the history and accomplishment and valor…
Then I’d answer you:
The Coast Guard.