Editor’s Note: We offer another fine article by our friend, Adam Piggott, the Gentleman Adventurer. The article is also posted on his site. We encourage you to visit his blog and read his other though-provoking material.
I was reminded this week of how far the Right has shifted towards the Left over the last twenty years when I saw good old Hillary Clinton’s quote from almost twenty five years ago – “abortion should be safe, legal, and rare.”
Rare is of course the key part of this little snippet of deception. In the quarter of a century since this blather the USA has set up a government offshoot in Planned Parenthood which is in the business of encouraging women to have abortions. The Left has shifted position from one of assuming that abortion is only a matter of last resort to one where it is now promoted as a lifestyle choice. This is the old “slippery slope” argument that the Right has constantly warned against but in the process has succeeded in doing exactly nothing about.
But not only has the Right done nothing to combat orthodoxies such as this, it has over time assumed the position of the Left on so many issues. Now a statement that abortion should be safe, legal, and rare would not be out of place coming from the lips of conservative leaders. In fact, I have little doubt that they would be attacked by the Left if they uttered this phrase today. The Left’s own platforms that were seen as radical just a quarter of a century ago are now so conservative as to be unacceptable in polite latte-sipping society.
Progressives are incapable of creation. All they are good for is to take our culture down into a death spiral in the name of progress and modernism. Leftists cannot hold to their own platforms of recent history because they are in a constant competitive race to see who can be the most radical and outlandish among them. Witness the following tweet: 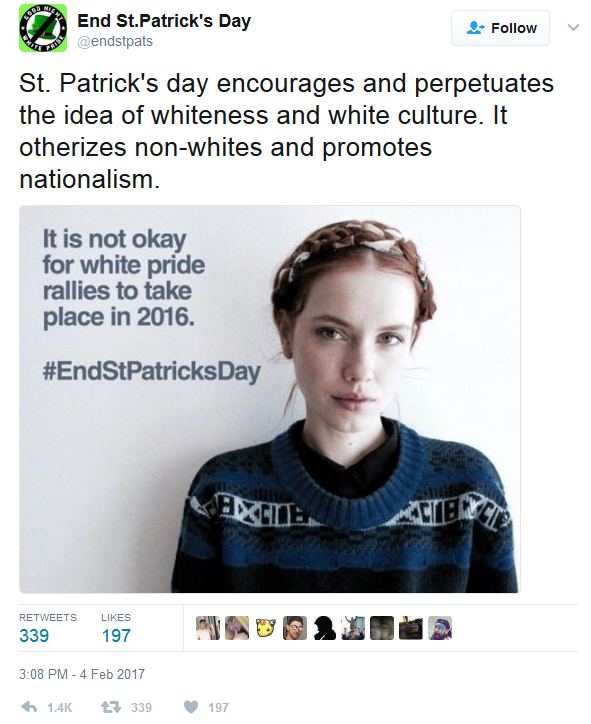 Is this real or is it a piss-take? The fact that we are unsure is evidence enough that we are on a fast train going down a mountain and the brakes are gone. The alt-right are classified as extremists not because we are extreme but because our culture has degraded so quickly that conservative statements that would have been seen as reasonable twenty five years ago are now classified as hate speech.
Of course it is always the Left that gets to determine what is hate speech and what is not. Whoever gets to define hate is the one with the power. But the Right has been so terrified of being labeled as racist or sexist or homophobic or whatever else the hate-defining morass comes up with that the end result is a complete capitulation of former conservative values.
The other attack that progressives utilize with great frequency is that anyone holding on to traditional values is “old fashioned”. The assumption is that modernity is good and has value in of itself, so that anything they come up with today is not only brilliant but automatically superior to anything that humanity invented in the space of human history. The only two exceptions to this progressive rule are a couple of chaps called Karl Marx and Sigmund Freud.
This constant state of change which as I mentioned earlier is competitive, has as its end result the public lunacy that we witness today in our previously venerable institutions. It is competitive precisely because it offers its adherents moral rectitude. The progressive left consider themselves to be good people because of what they believe in. They have mistaken change for progress, and progress for virtue, and virtue for ethics. And along the way they have succeeded in distorting the definitions of those terms to the point where conservatives have trouble understanding what they mean. That they are neither virtuous nor ethical is irrelevant due to the fact that they have been conditioned to believe that a rigorous and frenzied state of change will confer these traits upon them by default.
This is why a progressive today can no more hold to Hillary Clinton’s previous line on abortion than a fish can ride a bicycle, for want of a better metaphor. Since change is their almighty they are then beholden to its worship for its own sake, regardless of the effect the change has even on themselves. They will convince themselves that the most debasing actions are wonderful for the sole reason that they are sure that it confers virtue. Thus, persuading a young woman to have an abortion is not just right in their eyes, it is moral.
This type of behavior can only result in the snake consuming itself by eating its own tail. Conservatives would have done well to step back and let them destroy themselves. Instead they got on the train in an attempt to curry favor with what they assumed was the only way forward. They fell for the lie of change and progress. But the only progress that has been made is a line pointing straight down.

Beast Life: Guest Post by Ivan Throne on Self Defense