God Himself came to earth.  Angels sang.  Shepherds watched.  Kings gave.  He grew.  Teachers learned.  He was baptized.  He preached.  He taught.
In one moment of beauty that Peter, James, and John were privileged to see, He was transfigured before them.  Those three saw Him in a way that no one else will until He comes again.  He may have looked like an ordinary man, but in Him all things that are beautiful are made moreso.
He left us with remnants of His beauty too.  As we are gathered together as His body, we are beautiful because He is beautiful.  We eat this bread as a meal together, remembering His body and the life He lived, from infant to adult, spreading beauty wherever He went.
He is the ultimate in beauty. We cannot fathom what the New Jerusalem will be like.

In His last week, He was welcomed.  He ate.  He was arrested.  He was tortured.  He was killed.
Crucifixion was one of the most horrible deaths imaginable.  With nails, His hands and feet were pierced and fastened to a rough piece of wood.  It was lifted up and He was put on display for all the city to see that this is what happens to enemies of Caesar.  On top of the crucifixion, He endured further humiliation.  A crown of sharp thorns was jammed down on His holy head.  His Precious Blood ran down His face.  The face that had called others from death to life was now dying.  His closest friend had denied knowing Him.  Few there were that remained with Him.  Even the Earth itself could not bear it; quakes shook the city.  He was so horrible, the sun refused to shine.  This Man of beauty was now a Man of horror. 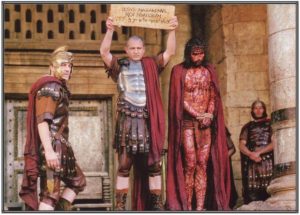 He even asked the question that opens the twenty-second Psalm: “My God, My God, why have You forsaken Me?” His blood covered His body, and after He died, that blood and water flowed from His side. It is by that blood that we are cleansed. He will take the horrors of this earth and change them into beauties. In the same way the blood in which we are washed changes our horrors into beauties.