Peace be to you. The friends greet you. Greet the friends, each by name. – 3 John 15 ESV 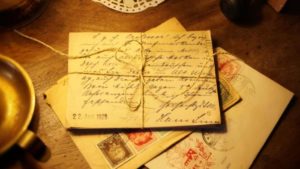 And to think, people that John knew personally, knew others, who knew still others, and on down the line to today. The spirit of what John wrote lives on. “Greet the friends there by name.” I know it seems odd to us, but imagine a world where you could not hit a few buttons and be connected to people on another continent. A letter comes—a rare thing in those days—carried by Demetrius to your church’s leader, Gaius. Gaius reads the letter to you; a letter of joy, of condemnation, of encouragement, and of hope. He then calls out every one of you by name and brings John’s greetings. To think—a man that walked with Christ Himself knows your name and thinks of you. That would mean that he’s spoken to Jesus about you. Our Lord knows who you are. He doesn’t stand off and see “The people of Texas,” “The people of California,” and “The people of England.” Our God cares for each of us as an individual. The God who knows you, loves you. And it was because of that love that we individuals can eat this meal together as a body [Editor’s Note: This refers to Communion].
He knows all of us by name. The infinite, the all-powerful, the transcendent Son of God stepped down from Heaven and took on flesh to walk among us as an individual, just like us. And through that, He can truly be our Brother.

He who has an ear, let him hear what the Spirit says to the churches. To the one who conquers I will give some of the hidden manna, and I will give him a white stone, with a new name written on the stone that no one knows except the one who receives it. – Revelation 2:17 ESV

The Giver would know the new name as well. Imagine that level of intimacy with Christ—to have a name known only to Him, so that when you heard it, you knew that it was Him calling to you. Your ears would perk up, you’d look around to find Him. You would know that He is looking for you and only you. He also said that He knows His sheep by name, and His sheep know His voice. As he led his earliest flock, Peter, Andrew, James, John, Philip, Bartholomew, Thomas, Matthew, another James, Thaddaeus , and Simon the Zealot, let us too take the cup of the new covenant.
His chosen servants spread the word about Him through the world, turning it upside down in the process. It’s because of what they did that we can follow Him today.