In John’s Gospel, Jesus prays for the Apostles, saying, “Holy Father, keep them safe in your name that you have given me, so that they may be one just as we are one.” Later, in Acts, we read that the church was forced to scatter, away from where it all began in Jerusalem, because of persecution. They went throughout Judea and Samaria, Phoenicia, Cyprus, and Antioch by chapter 11, modern day Turkey by chapter 13, Greece and part of the Balkan Peninsula in chapter 16, and finally Rome in chapter 28. Church tradition holds that both Peter and Paul were martyred in Rome.
That’s not the only path the church took. While James the son of Zebedee was martyred in Jerusalem, church tradition also has stories about where the other Apostles went. Philip and John went to western Asia Minor. Andrew went to Scythia, north of the Black Sea. Matthew went to Persia. Bartholomew and Thaddaeus went to Armenia. James the son of Alphaeus went to Egypt. Thomas made it all the way to India. Simon the Zealot may have made it as far as Britain. And Matthias, chosen afterwards, went to Georgia between the Black and Caspian Seas.
But everywhere they went, they took this meal with them. As we remember what they did, we partake as well. 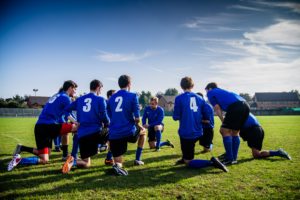 Not only did they take the same meal everywhere, they took the same teaching. The Father made all things in Heaven and on Earth, whether visible or invisible. Jesus Christ is the Son of God, and all things were made through him. He came down to earth for us and for our salvation, was made flesh, and was truly man. He was crucified, then died, was buried, rose, and ascended. He shall come again to judge and reign forever. He sent the Holy Spirit, who gives life, spoke through the prophets, and is to be worshiped along with the Father and the Son. There is one church, with one baptism for the remission of sins. At the end of days, the dead shall rise, and we shall live in the world to come. A singular message for the entire world, Jew or Gentile.
One meal. One belief. One body. All working together, just like the Cowboys or the Cardinals, toward the same goal. That’s the team I’m on. Are you?

Anatomy Of A Leftist: Hypocrisy