There is a tendency among people, and conservatives in particular, to see the world only through their own lens. They tend to project their own biases and opinions onto other people, and therefore misunderstand them. Conservatives are not immune to this. We don’t understand the left, and that is why we lose.
One of the defining characteristics of leftists is hypocrisy. Let’s look at example from recent events. The New York Times recently hired the openly racist Sara Jeong. Leftists almost always accuse their enemies of being racist, sexist, homophobic, etc. But the fact is, they don’t really care about any of those things. The newspaper hired Jeong because they don’t care about racism. Historically, the Democrat party was against civil rights and against freeing the slaves. Race issues are simply a means to get votes. It has been said that liberals need to keep black people down and dependent so they can count on their votes. The results of the last 50 years of liberal policies tend to be strong evidence of this. 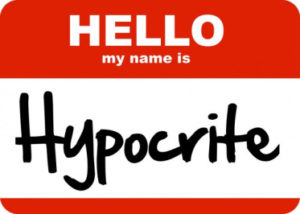 They didn’t care that Bill Clinton was a womanizer. They only pretended to care that Senator Al Franken harassed women, because they were successfully waging a campaign against Roy Moore in Alabama. They didn’t care about Al Franken, who didn’t really do that much in the first place, but they had to pretend to be cleaning their own house to combat Moore. They have no problem calling someone a homosexual in order to insult them, while they pretend to advocate for that lifestyle in order to get votes. Those on the right are not enamored with Donald Trump’s personal life. I think we’d happily have voted for someone else. Yet Donald Trump is the only one in decades that actually fights and wins instead of making principled stands and losing at the last minute. So we’ll have to admit a little hypocrisy here. Nobody’s perfect.
They don’t care that Peter Strzok is an adulterer. They are giving him money, on a page that calls him a “proud husband and father” to the tune of over $435,000 at the time of this writing. They don’t care that he is a slimeball, and have no awareness that he is one. This actually isn’t hypocrisy, the left has always been anti-family. They do pretend to be feminists, while Obama paid his female employees less than the men.
The left always seems to be violating their principles, because they don’t actually have them. It’s all an illusion to attract voters. Everything is a means to an end for them. They complain about the Russians “hacking” the election. The Russians did nothing significant, and certainly didn’t actually influence any votes. Or in the remote case that they did, they did it by exposing the truth about Hillary. The Democrats act like the Russians altered ballots. Meanwhile, the DNC did hack the primary election; they stole it from Bernie Sanders. They did try to influence the election with their fake dossier.
There are hypocrites in any group of people, but you have to understand that in order to be a leftist, you have to be a hypocrite. Every leftist is a hypocrite.
So what does this mean for those on the right? First, you have to understand, that when a Democrat is OUTRAGED!!, it’s a con. He doesn’t care about any principles; he’s trying to use yours against you. If you are accused of racism, it doesn’t mean they think you’re a racist or that they care about race issues. It means they think they have something that will put enough pressure on you so that you quit. D not forget the strength of the right. We have principles, and we have honor. It’s also a weakness, because the Democrats will use that as against us if we let them. When someone on the right commits a crime, we expect them to resign, and they often do. When someone on the left does, we expect the same thing. They will never do that.
This is why they call Trump a Nazi. This is meant to make the right stop supporting him. If Trump actually is a Nazi, it is only because the definition of Nazi has changed. The historical Nazis were bad people, so the left uses the word “Nazi” as a slur. If a leftist calls someone a Nazi, it just means they disagree with the leftist. This brings us to another defining characteristic of the leftist that we will explore in a future post, they are the enemy of truth.

Andrew Jackson as a Duelist