Bread is one of the most basic foods we have. We don’t pay much attention to it. Of course, it doesn’t start off as loaves. God gives us the ability to complete His creation by changing the wheat into bread. It grows as individual grains and then is crushed and ground to a fine powder—flour. In a canister or sack, each particle of flour is free-flowing, moving about without regard to its neighbors. Then, we add water. If you could see what happens on a microscopic level when that happens, you would see tightly coiled proteins unwrapping from each bit of flour and then entangling themselves with the ones surrounding them. The powder that could have been blown away by a hummingbird flying over it is now a continuous lump of dough that a gale-force wind can’t pick up. Not only is it now one piece instead of many, it’s difficult to pull a chunk away because it stretches and clings to itself. Baking makes it even more solid. Under the stress of heat, the starches unravel from themselves and interlace with each other, then the water evaporates leaving a solid piece of bread that we can eat.
Our God does the same thing with us. The water of baptism wets us and cleanses us, and we bind to those around us. Trials solidify us together. The next time you eat the bread, in which we see our Lord’s body, look at its unity. 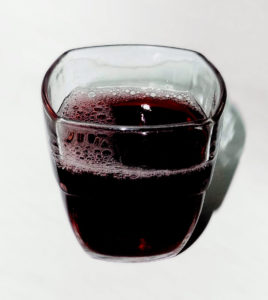 In the same way, the fruit of the vine is brought together. We as individuals may have grown in clusters, like the grapes, but then they’re crushed and the juice from thousands of single grapes is mixed and mingled. This makes them all influenced by each other, and in every sip, there is the essence of many separate fruits combined into one. As Peter told the early Christians when the world was aligning against them, “Once you were not a people, but now you are the people of God; once you had not received mercy, but now you have received mercy.” All throughout the world we are one people—God’s people!