Seems a bit early to be writing this, but the fact is the history is already written. The nails are in the coffin. It’s already happened. The US is down 34 to 10, and there are only 2 minutes to go. There is no time for a comeback.
Recently, I had a friend share a great essay on the life cycle of nations. This essay is called The Fate of Empires and Search for Survival. It is written by Sir John Glubb.
In this most excellent work, the author examines the history of great nations… the Greeks… Rome.. The Byzantines… the Ottomans. He seeks out patterns and tries to learn what lessons can be learned. As always, a work like this should be judged by its predictive ability. Lots of models can be created to match the past. But matching the past doesn’t help unless they also turn out to match the future. So why is this work important? 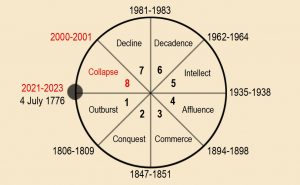 Well, it specifically predicts the breakup of the Soviet Union, which was something that people of the 60s and 70s simply found unthinkable.
Now let’s look at the Glubb’s stages of the life cycle and see how they match up with the life cycle of the United States.
Stage I: Outburst. This stage is the pioneer stage. As Glubb states, over and over again in history, we see a small native people exploding and conquering large land masses. To many, this will make them think of Manifest Destiny and the western expansion, but to my own eye, the outburst was the Revolutionary War. Before the war, the colonies were insignificant on the world stage.  Then came the defeat of the English.  It is after all called the Shot Heard Round the World for a reason.
Stage II – Age of Conquest:  In this stage we see the great expansion. This is where manifest destiny comes in. Old weapons are mastered and improved, new weapons are invented, and massive lands are conquered. While conquering and settling these new lands, massive amounts of wealth are generated. Again, this should all be sounding familiar.
Stage III – Age of Commerce:  Industrial Revolution, anyone? All of that wealth ends up being put to use, as infrastructure in this stage explodes.  In this stage, we see art and luxury. You see grand state buildings. The rich build themselves palaces. Now think of Mr. Vanderbilt’s Biltmore. Is it not a palace? It should be noted in this stage the schooling of boys is still intentionally rough. Fortitude and courage and honesty are all priorities. I would note that American Football was developed during this period to drive those qualities home.
High Noon: This is the peak of the Nation. It’s the point where the nation goes from growing to dying. For the US, this was the 1940s. WWII was won. Evil was defeated, and everyone relaxed. Money was everywhere. The US was the most powerful nation in the world. And now, for the first time, we had something to lose, and we noticed we may want to protect it.
Stage IV – Age of Affluence:  Money is the destroyer of nations. That is certain. Over time, the desire to be rich replaces the individual desire 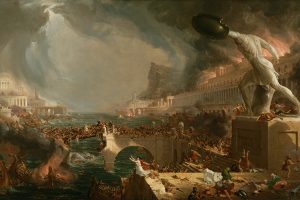 for fame or conquest or achievement. Rather than going to school for learning or virtue, men go to school to learn how to get rich. And yes, it will disappoint those who believe history has ended, to know that Arab moralists complained about this exact problem way back in 1090.  What is the American dream, my friends? Is it climbing Everest? Or is it being able to buy stuff?  It changed back in the age of affluence. In America this was the Post-WWII period. The Baby Boomers were raised to be spoiled brats, and that was the beginning of the end. The age of affluence is characterized by defensiveness. Empires are considered immoral. Conquest is immoral. War and fighting are immoral. Again, bells should be going off. Think back to the counterculture of the 60s and 70s.  “You’re all doing it wrong!” shouted the hippies. But the message the hippies thought was new, was just the same thousand-year-old mistake of all rich, spoiled children of affluence.
Stage V – Age of Intellect:  In this stage, the nation is deciding that all the world’s problems can be solved, not by hard work and courage and determination and struggle, but by the brain alone. After all, it’s CURRENT YEAR. In this stage, the population imagines that everyone is a genius and everyone should go to college. This exact thing happened in the 11th century to the Arabs. Rather than a few universities in the major cities, universities sprung up in every small town. This was not a sign of life and a bright future. This was the tolling of the death bell.  Today in the USA, we are told every day that education is the answer. This is proof positive of where we stand in the life cycle. Education is not the answer. Everyone is not a super genius. There is no shiny Star Trek utopia around the corner. Rather, around the corner… is the grave.
The USA was born in 1776.
As we study the life cycle of these ancient nations, we come to a stark and obvious average. 250 years.
My friends, 2026 is less than a decade away.
It appears to me we are right on schedule.

The Chase of the Panther (Part 1)