Sultan Knish offers a strategy to combat an ideology whose only hope of expansion lies in promoting itself through intimidation, conformity, deception, and political correctness:

When Mark Twain said that, “Against the assault of laughter nothing can stand”, he was speaking as part of a long tradition of American humorists who satirized the great and powerful, who knew that nothing so much cuts a puffed up ego to size and the insecure man hiding behind it, as a well told joke. Islam in our time is the biggest puffed up ego there is. A fraudulent religion based on the plagiarism of a vicious desert warlord turned into a global empire. There is not one thing new in Islam. Its only claim to power is that it is wielded by men more ruthless and murderous than any other today.
Muslim rage is not a strength. When Muslims riot screaming in the streets every time they’re offended in some way, this is not the mark of a strong faith but a weak insecure one. So weak and insecure that it cannot turn the cheek or look down from a superior position of belief in the true God. Instead, like all pagan savages, it goes into a murderous rage because inside its worshipers know they are not the servants of a living God who can avenge all insults, but of a faith cribbed from Jews and Christians by an illiterate bandit who proceeded to win convert by terrorizing everyone who didn’t join his gang of bandits. Muslim rage does not emerge from a deep respect for Allah but from the knowledge that their entire system of belief is a fraud that could never stand up to any scrutiny. If the world’s religions were paintings in a museum, Islam would be a child’s dirty smeared finger painting all in one color.
Islam’s drive for world conquest is a sign of weakness. It is a sign of a deeply insecure faith. But then most killers are driven by their own insecurities too. The man who opens fire on a crowded cafeteria is weak inside but that only makes his explosive violence more dangerous and it makes coddling him more dangerous because sooner or later he will kill. The way to defeat Islam is never to coddle it, to enable its rages or its conquest of our lands. It is to stand up to it over and over again. It’s to laugh at it. Yes laugh it and ridicule it. America is a collection of immigrants with the humorous traditions of dozens of cultures, Irish, Jews, Italians, Scots, Russians, Asians. We’re not just the reservoir of the world’s talent but its humor too and humor is the ultimate weapon against the balloon that is Islam.
Islam can only expand by force. It can’t leverage any real military force against us. Instead it expands by intimidation, by conformity, by deception, by political correctness. It has no defense against laughter. Men who are so insecure they would kill over a stray word here or there, can’t stand up to being laughed at, to being ridiculed, to have their cherished values transformed into a laughingstock.

The approach suggested here is not without precedent. One of the primary purposes of the plagues that God sent upon Egypt was to expose the foolishness and impotence of Egypt by mocking its entire system of worship, while clearly demonstrating that the Lord is God and no other.

And the Lord said unto Moses, “Go in unto Pharaoh: for I have hardened his heart, and the heart of his servants, that I might show these my signs before him:  and that you may tell in the ears of your son, and of your son’s son, how I made a mockery of the Egyptians through my signs which I have done among them; that you may know that I am the Lord”(Exodus 10:1-2).

Elijah was not averse to a little mockery when it came to confronting the priests of Baal and the entire false system of worship that had been established in Israel as the national religion by the daughter of a foreign king. 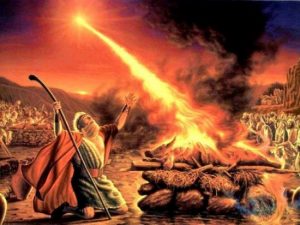 So they took the bull which was given them, and they prepared it, and called on the name of Baal from morning even till noon, saying, “O Baal, hear us!” But there was no voice; no one answered. Then they leaped about the altar which they had made.  And so it was, at noon, that Elijah mocked them and said, “Cry aloud, for he is a god; either he is meditating, or he is busy, or he is on a journey, or perhaps he is sleeping and must be awakened”  (1 Kings 18:26-27). 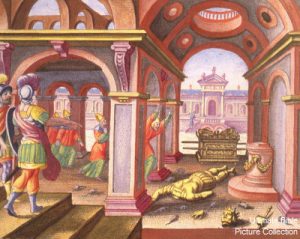 God Himself was perhaps having a bit of fun when the Philistines entered the temple of Dagon only to discover the image of their god prostrate before the Ark of the Covenant.  A short time later, the mighty Dagon would have its head and its hands severed after the Philistines had set him back in his place. What could be funnier than a god that is so powerful and mighty that it must be propped up and set back in its proper place by its own worshipers? What could be funnier than carving an idol out of half a piece of wood, only to burn the remaining half to cook a meal? Now, that’s funny.
On his arrival in Athens and after walking around the city, the apostle Paul would draw the Athenians’ attention to a statue that they had erected to an unknown God, a statue to which the paid homage in order to cover all their bases just in case they were unable to determine which particular god they had offended.  That’s funny.
Ironically, this mockery culminates and finds its ultimate expression in an event that is not so funny:

And you, being dead in your trespasses and the uncircumcision of your flesh, He has made alive together with Him, having forgiven you all trespasses . . . Having disarmed principalities and powers, He made a public spectacle of them, triumphing over them in His death on the tree (cf. Colossians 3).

In stark contrast to Islam, where men lay down their lives by committing suicide in exchange for an eternity of sensual pleasure, what is so funny about one man laying down His life for the sake of others, while receiving the punishment that we all deserved in order to afford us the opportunity to live and be judged worthy of eternal life based upon the record of One Who did no wrong?
What’s funnier, the religion that bullies, terrorizes, and threatens in order to establish and maintain its dominance in this world, or the one which teaches us to love our neighbor as ourselves, to do unto others as we would have them do unto us, to extend forgiveness to those who don’t know any better, and whose hope lies in a world where we no longer struggle against sins of the flesh?
In the second Psalm we read:

“Why do the nations rage, and the people plot a vain thing?  The kings of the earth set themselves, and the rulers take counsel together, against the Lord and against His Anointed, saying,  “Let us break their bonds in pieces and cast away their cords from us.”  He who sits in the heavens shall laugh; the Lord shall hold them in derision” (Psalm 2:1-4).

The Hebrew word translated “laugh” is sachak (to laugh, usually in contempt or derision, to play, to mock, to make sport, to jest, to laugh mockingly).  He also holds them in derision (la’ag: to deride, to ridicule, to laugh to scorn).
Islam is a religion characterized by rage where its most devoted adherents behave as wild asses of men. How does God respond to such men who have devoted themselves to this false ideology? He laughs. He derides. He mocks. That is precisely what such an ideology is worthy of.
When one of the disciples drew his sword in the defense of the Messiah, he was commanded to put away his sword and told that whoever lives by the sword would eventually die by the sword. Later, when testifying before the Roman leadership, the Messiah was questioned about His kingdom and kingship. The Messiah replied that His kingdom was not of this world and that if it were, his disciples would indeed take up their swords to defend it.
Why is Islam a religion of the sword?  Because they are the spiritual descendants of Esau who sold his birthright for a meal; and when they are slighted like Esau was, they can only find consolation in the thought of killing the offender. Because ‘eternity’ is nothing more than an extension of the present world where one may continue to gratify the base desires of the flesh. Because they are fighting from a futile position of abject weakness in hopes of  establishing a kingdom that is earthly, which is the best they can hope for. They are like the impotent husband who can only blame his wife.  Take away the sword, and nothing of substance remains.
We, who adhere faithfully to the teachings of an itinerant Rabbi  from Galilee, Who just happened to be the promised Messiah of Israel, have been shaped and influenced by a much more radical worldview. When we are cursed, we bless.  When we are derided, we forgive.  When we are falsely accused, we speak the truth. When we are persecuted for His name’s sake, we rejoice.  When we are insulted and mistreated we do not feel compelled to right the wrongs ourselves or to take it out on the ‘infidel’.  Instead, we leave room for the wrath of the One Who is enthroned on high and Who eventually gets the last laugh.

Book Review – "Living With the Dead in the Middle Ages"