Geary, Patrick J. 1994. Living With The Dead In The Middle Ages. Ithaca: Cornell University Press.
What Is This Book About?
Geary has produced a compilation centered on how the living and dead interacted in the Middle Ages. While modern man considers death to be unnatural and evil, medieval man saw it as a necessary transition and nothing to fear. Under the influence of Frankish traditions, the medieval view of death focused upon the fact that the dead and the living had an ongoing relationship. While modern people tend to “relegate the dead to oblivion,” medieval Europeans maintained a connection with the dead, both offering and receiving tokens and favors (Kieckhefer, 474). The book presents the ways in which medieval Europe memorialized the dead, conducted funerals, and prayed for, and to, the deceased.
In a social-historical manner, Geary analyzes the practices of the Middle Ages, using case studies to develop the concepts. The two groups, living and dead, formed one community, with interactions moving in both directions. These interactions could be both individual and communal, with both individual people and groups, such as monasteries, benefitting from the activities. Yet, the reason for continuing contact with the dead was not only related to receiving beneficial favors, but based upon a social bond that the two groups had for one another.
Why Did The Author Write The Book?
This second book from Geary continues the same basic topic as his first, Furta Sacra: Thefts of Relics in the Central Middle Ages. Geary furthers his research into saints’ relics and how they were understood and used in the Middle Ages, yet Geary is not limited to relics, but also considers how the dead, in general, were memorialized in that era (Kieckhefer, 474). The book under consideration is a collection of previously published essays, where the author displays the “range and development” of his work since the publication of his first book (Paxton, 983).
Geary’s research has shown that the dead, in medieval times, were not ignored or forgotten, but were omnipresent, continuing to serve an active role in society. Geary states that his intention for this book is to demonstrate how different the past was from the present, regarding how the dead are treated. He also endeavors to show that the medieval approach is both logical and reasonable. While modernity banishes the dead from society, in the Middle Ages the dead remained an important part of the “social, economic, political, and cultural spheres” (Geary, 2-3).
Finally, though the chapters were previously published, only four were originally in English. The rest were in French, German, or Italian, so they were first made accessible to English speakers in this volume. The translation and organization into one volume allows Geary to share his findings with a broader audience.
What Is The Main Thesis/Argument Of The Book?
The central thesis of the book is hard to determine, since there are twelve separately published articles compiled into one book. There is no real, organic “point,” but one that was added, after the fact, by the author. Ultimately, Geary attempts to demonstrate that not only were the dead still considered a prominent, if incorporeal, part of society, but the people of the middle ages interacted with the dead in many tangible ways. This interaction was less about theological or social belief, but based more upon practice (Geary, 44). As such, death was not viewed as an end, but as a transition, and continual interaction between the living and the dead was an essential part of the society (Geary, 2).
The argument is organized into five general sections: Reading, Representing, Negotiating, Reproducing, and Living. Section one covers how historians have heretofore studied the topic of the dead in a medieval context and how these studies could proceed. Section two explicates the concept of how the living and the dead remained in the same community with one another. Section three deals specifically with how living people involved the dead, especially saints, into temporal disputes. Section four considers how cults of saints were formed, how their relics came to be revered, and how certain physical locations became identified with specific saints. The final section presents case studies where the principles from the prior sections can be analyzed.
Geary realizes the difficulty in finding a centralized thesis in this type of book. He is analyzing a very complex society, with all of the tension and contradictions that exist therein. He makes no claim to present a comprehensive picture of the topic, but rather introduces one way in which the study of the topic could proceed, and an understanding of how medieval society existed, in some ways, as a single community of both living and dead.
What Are The Main Ways In Which The Author Supports The Thesis/Argument? 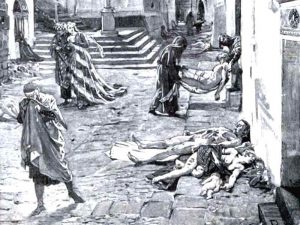 Even God Laughs at Islam