Editor’s Note: We are posting a thought-provoking article by our friend, Harbin.

I was trying to think of a way to explain the problem. Some people in anti-Trump America have issues with the whole immigration debate, and just want to shout “RACIST!!!” at any mention of a wall, vetting, crime, costs, posterity, etc. There are many reasons why they refuse to have a reasonable, fact-based discussion that involves numbers, people, families, costs, benefits.
When I ask “how will the average American fare, competing against cheap labor from Third World countries and smart immigrants from high population nations?” they reply, “it’ll boost the economy. Don’t be selfish; you didn’t build it, and you can’t keep everything. They’ll just have to keep up or die!” They seriously don’t seem to care about the people who are already here.
I think satire might be the way to reach them.

I have A Modest Proposal (please note the classical reference). 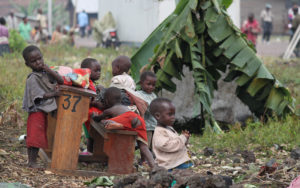 The Democratic Republic of Congo (DRC) has vast mineral resources, a marvelous growing climate, good soil, incredible wildlife, abundant rainfall… and a per capita GDP of ~$800 a year. (compare: US $57k, Denmark $49k, Japan $41k, China ~$15k, India ~$7k). GDC’s population has a life expectancy of only 57 years. (compare: US 76, Denmark 77, Japan 79, China 73, India 63).DRC murder rate is sky-high (230 per million annually, compared to US at 42 per million and China at 10 per million).
In short, compared to its potential on paper, the DRC is a basket case.
But there is a way out. A simple way that will, I’m sure, win broad international support, and boost GDP, extend life, lower crime, and improve the infrastructure of the DRC.
It’s a simple two-step process, and immigration is the key.
First, about 98% of the DRC’s 77 million people will be sterilized, then about a million surplus Chinese couples per year can immigrate to replace them over the next half-century, as the locals die out naturally.
Installing a population that has, on average, about 19X the per capita productivity, an average IQ that is 40 points higher, and a vastly lower crime rate would be very beneficial to the country. The stats for the DRC will improve with skilled workers being able to efficiently extract the resources, farm the land, and build and maintain factories, power plants (the tropics are a great place for solar panels!), proper sewage and sanitation, and so forth. Productivity will dramatically rise, crime will fall with the aging of the original population, exports will boom, and job growth would be excellent.
On top of that, the new Congolese will bring a great deal of new automation. Because of this, labor costs will fall, on-the-job injuries in things like mining will decline dramatically, and mean household income will improve.
I’d expect life expectancy and international standardized test scores to both soar over the next half-century as well. Child-rearing costs for the native population will be slashed, resulting in huge savings. There will be a lot of job opportunities with all the growth, and the new families being formed will likely need to hire nannies and maids by the busload. Current Congolese citizens will see a dramatic improvement in healthcare facilities, roads, and a more reliable electric grid. The technology is available, and most of the new Congolese would be more than happy to pay their own way to fly in. The plan should pay for itself in less than ten years.
Now, of course, it is possible that some of the existing Congolese will not like this plan. But that’s actually a bonus. If many billions are borrowed and spent on bombs, bullets, and a formal invasion force, that will boost GDP like nobody’s business. The more bombs we have to drop, the greater the GDP surge it’ll push. Commit a few carrier groups and a few air wings of older craft (no real air defense there, so it’s safe for the pilots, with mobile ground targets being little more than a moving live-fire exercise) and all the services can join the party and test out their newest weapons systems. We could even make it an international joint task force to practice interforce communications and coordination, and have a competition for targets per munition deployed to increase combat efficiency.
It’s a win-win for everyone.
Of course, I’m sure everyone sees the obvious problem with this plan: it does nothing to address the poor economy, pitiable test performance, high crime rate, and abysmal life expectancy numbers of Sudan or Nigeria….

Charlottesville and the Church