We didn’t want to go. My wife is getting her master’s degree. She’s going to become a counselor. One assignment for her phoney baloney SJW diversity class was to attend an event that was out of her comfort zone. Out here in flyover country, there aren’t many options. So a pride event was it. She’s going to be ministering to people with mental problems, and here was a large group of them. 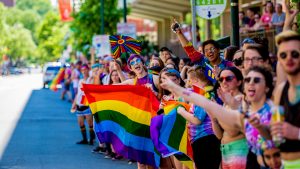 The event was about 100 miles from where we live, so we loaded up the kids and took off. Yes, we took the kids. I wasn’t sure it was the right decision, and I still am not sure, but we didn’t have anyone to babysit. I figured they are getting this agenda shoved down their throat, so we may as well teach them about it on our terms. I wore my concealed carry weapon. That’s something I rarely do, here in the low crime heartland, but there had been a number of shootings in the larger town.
And it was not that big of a deal. There were a lot of people wearing odd makeup, with odd hairstyles. There were a lot of T-shirts supporting LGBT causes. There were a lot of T-shirts devoted to other liberal causes, like illegal immigration and abortion. There were a few about witchcraft and Satanism. I explained to the kids that evil birds of a feather flock together. There were men wearing tutus and women dressed as Wonder woman. There were people that you couldn’t tell if they were men or women. One person had its shirt off and was bandaged up, I presume because breasts were just removed.
Perhaps the most revolting thing about it all, was the booths. One man spoke to us. He was a part of some sort of organization that opposes housing discrimination. He seemed like he was wanting to sue somebody. But mostly, it was everyday businesses, setting up booths and giving away trinkets. Those companies were there to support the degeneracy. In this day and age, you can’t make a stand against sin, lest you be labeled a bigot. But these companies were there to show support. Or feign support, in order to gain business. 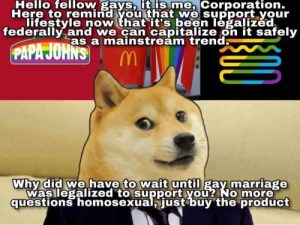 It was a group of pathetic lost people, and people who wanted to make a buck off them. All in all, it was a non-event. I’m thankful that it wasn’t the same type of horror that occurs in larger cities. I’m glad it’s over with, and I won’t be going back. Funny thing, though, there’s a Christian music festival at the same time, and just across the street from the pride event. I’m not sure how many people are aware of this odd scheduling coincidence, or how that oil and water situation will work out.