Whether it’s Paul’s address to the Athenians in Acts 17 or Jesus’ refusal to answer the Pharisees’ questions about his authority in Matthew 21, many of the most powerful interactions and addresses of scripture are rhetorically structured. Understanding that structure can help us to better understand the whole context of an argument, as well as its most relevant points. 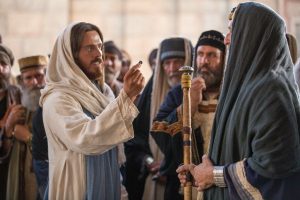 Some rhetorical structures are as simple as a question challenged by a question, the answer being based on the original questioner’s response. Such rhetorical interactions are often a contest of wits, played out in public according to rules familiar to the original audience. For example, When the Pharisees asked Jesus by what authority he taught (Matt 21:23), Jesus responded with a question of his own. The Pharisees’ refusal to answer His question was then used to justify Jesus’ refusal to answer their original question. The same structure can be seen in the next chapter when the Pharisees and Herodians try to trap Jesus in a lose-lose question about the lawfulness of paying taxes. Understanding that such questions are not information-seeking interactions but are instead a rhetorical dance played out for others — whether the crowd or the Crown — can help us to better interpret the Word as recorded for us.
Other rhetorical structures are far more complicated, following rules both formal and informal, and attacking and defending on different levels at the same time. In First Corinthians 15, Paul uses interrogation, irony, witness testimony, history, and the authority of church doctrine to illustrate that not only was Christ raised from the dead, but that His resurrection is the central fact of the Christian faith. But Paul doesn’t just throw his assertions at the Corinthians willy-nilly. His arguments are based in a Greco-Roman rhetorical style that gives the overall passage a compelling persuasive power. That’s what good rhetoric does.
So here is Paul’s argument for the resurrection from the dead, interspersed with descriptions of each rhetorical section – both purpose and contents – followed by an outline of the scripture itself.  I hope that reading Scriptures’ most complete teaching on the meaning and importance of the Resurrection within its native rhetorical structure gives you additional insight into both our Savior and our faith.
Exordium* (vv1-2) – An introduction in which the writer sets forth his concerns and intentions. The exordium introduced planned, recurring themes like Paul’s phrase “in vain,” repeated throughout the argument (vv. 10, 14, 17, 58) and thematically explored in verses 12-19 and 29-34.
Now I make known to you, brethren, the Gospel

Narratio (vv3-5) – Background information is provided. A narratio included judgments such as common sayings, popular beliefs, or supporting historical narrative. Verses 3b-5 represented the creed or “popular belief” of the church: Christ died, was buried, and was resurrected.
For I delivered to you as of first importance what I also received:

If we have hope in Christ in this life only, we are of all men most to be pitied.
Probatio (vv20-28) – This section consisted of a propositio, a statement of the proposition to be proven (v. 20); a ratio, or reason establishing the truth of the proposition (vv. 21-2, the historical examples of Adam and Christ); a central confirmatio which further proved the ratio, expressing it in a different way (vv. 23-4), and an exornatio, which confirmed the arguments presented (vv. 25-8). 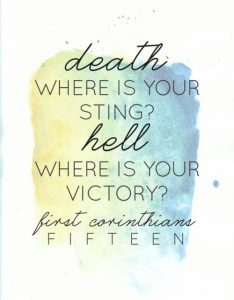 But now Christ has been raised from the dead, the first fruits of those who are asleep. For

Peroratio (vv29-34) – This section recapitulated the main points of the probatio and turned the case against the opposition by attacking their primary points. Paul used three strategies for composing a peroratio: interrogation (vv. 29-32a), irony (v. 32b), and proposal of policy (vv. 33-4).
Otherwise,

I speak this to your shame.
* Descriptions of the portions of Deliberative Rhetoric blatantly stolen from JP Holding of Tektonics.org.

A Poison Tree by William Blake