Observe, Orient, Decide, Act
To call Colonel John Boyd just a “military strategist” is akin to calling Julius Caesar just a “Roman general”. Colonel Boyd redefined the concept we use in thinking about problems and how to deal with the opposing force. Colonel Boyd wasn’t big on putting things on paper, a lot of what we know about his theory is rooted in student notes from his training sessions and word of mouth.
OODA loop thinking applies to both tactical, in-the-moment, responses and strategy development and application. 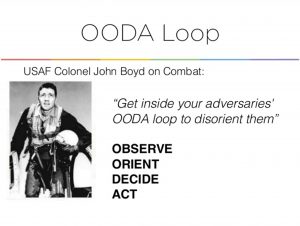 At the heart of his theory lies ambiguity. Fog of war, what other people are thinking, what your opponent is thinking, a million details of ways things could fail and go wrong, the OODA loop is how to engage that ambiguity and succeed.
When we are in a situation, or planning for a situation, we create a mental model of what we believe is going on. We’re wrong, of course, since no one except God can have all the information, but we can build a model that is sufficient for our needs. We do it all the time and that model works. Mostly.
OODA loop is building the mental skills needed to understand when that model is no longer working, make a new model, and act. The quicker you do this, the shorter the cycle, and your chances of success go up.
The phrase “getting inside someone’s OODA loop” means your loop is tighter. You’re creating a new model of reality, making decisions, and acting before your opponent does.
Observe is the start of the process. This is the intel gathering phase. You bring in as much information you need to feed the next phase. But you have to do it quickly.
Orient. Taking the information you just gathered, you need to understand where you are in relationship to the important criteria. If you don’t understand where you are in relationship to what matters, you can’t feed that into next phase. If you don’t have enough information, gather more by going back to Observe. Boyd named this the schwerpunkt of the entire loop. Here’s where your mental model truly lives. Everything you are lays the groundwork. Where you are now influences the model. What you understand right now shapes the model.
Decide (Hypothesis). If you don’t think you have enough information, go back to Observe. If you do, your mental model will be sufficient to show your next possible actions. You won’t ever have the perfect model. You won’t know if the model had produced the best possible actions, or even if any of those actions will succeed. But you have to make a choice. Later, Boyd started labeling this step as “Hypothesis” since you are really working on assumptions.
Act (Test). This is where the rubber hits the road. The other three stages all lead to this. If you aren’t getting here, you are doing it wrong and you will lose. Nothing is won by doing nothing. Boyd labeled this as “Test’ which makes sense because you a putting the decision into action and seeing what happens.
The loop begins anew until you have completed your task or can’t make any progress.
As you can see, the OODA loop is much flexible and inclusive than what is normally presented. It has many applications, from combat to business. Understanding the OODA loop and how to apply it gives you another tool for your mental toolbox. Being able to act faster and more correctly can mean all the difference in the world.

On the Shoulders of Giants