The Year of Our Lord 2017 has been an odd one, packed to the brim with victories and tragedies, marching to a cadence that at times seems to be one step forward, one step backward, and one step sideways. But through it all, in retrospect, the year has laid bare the awakening that is taking place across the United States and across the globe. With each passing day, there are fewer and fewer fence-sitters taking up space on the sidelines of our war for the culture, our war to preserve Christendom as the core of civic life in Western nations. As our enemies grow increasingly bold, verbose, violent, incoherent, and utlimately insane, our ranks swell with normal people who only wanted to be left alone to their quotidian affairs, but were prevented from doing so by the SJWs at work, or the larping Antifas at the junior college, or in the face of constant agitation from the media, from the politicians, from the bureaucrats, and from the quislings willing to sell out a way of life in the service of a base pagan chaos. 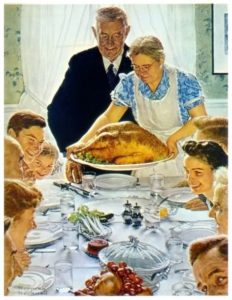 I remember the anachronstic stories of the origins of the Thanksgiving tradition from my childhood, already shifting from one of Pilgrims and Indians breaking bread together to one of Pilgrims stealing the Indian’s food, committing the grave mortal sin of calling them Indians and not Native Americans to begin with, and then immediately wiping them off the face of the Earth before the hearth fires ran cold.
That’s basically how the story has been retconned for children today, and this underscores the nature of the fight before us. The day has increasingly become one of contention, of the erosion of familial and community cohesion, and of the ceaseless incursion of the day by a cadre of dying brick-and-mortar retailers beseeching you to bail on what surely must be horrible families to stand in line for doorbuster deals on Chinese-made knockoff electronics that will be even cheaper on the day after Christmas.
Let us not forget, also, the legion of ingrate Millennials littering the Internet in the days leading up to Thanksgiving with an endless and repetitive well of articles advising how to turn Thanksgiving dinner into a FakeNews extravaganza, which will surely shut up any Drumpf-supporting relatives in the ranks.
Don’t let them take this day of family and bounty away from our culture.
Today is the most important non-Christian holiday on the calendar, for it is a day to strengthen and reinforce familial bonds and fortify our communities from the insanities of the unraveling degenarates who cannot abide family centric holidays at all.
As a skydiving instructor once said, if your primary chute fails, and your secondary chute also fails, it doesn’t matter if you’re hurtling to the ground at terminal velocity. Be thankful for the ride in and keep pulling that ripcord.
We are thankful for the political, social, and cultural beachheads we’ve made this year. We are thankful for an incredibly successful first year for Men Of The West and a growing number of like-minded endeavors launched by our friends and allies.
Most of all, we are thankful for you.
We wish you and yours a happy Thanksgiving and hope that the blessings of this year find each of you well and carry forward through the holidays.