Editor’s Note: We are happy to share a fine post that was originally posted at The Imaginative Conservative.  They have graciously agreed to allow us to share this great article with our readers. We do encourage you to peruse their site, if you do not already do so. It is full of wonderful articles and insights. This particular article was written by Kenneth Odom. We have chosen to only include the images included on the original here.

Fine art does not set out to entertain. Instead, fine art seeks to summon one to worship, for contemplation of God’s control, authority, and presence is indeed worship… 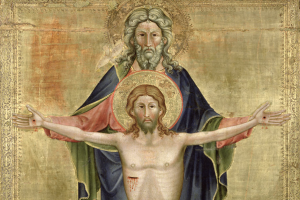 If God controls all things, then his commands are authoritative, and his presence inescapable. If his commands are supremely authoritative, then God can command all things, thereby exercising control, and since we cannot escape from his authority, he is necessarily present to us. Further, God’s presence is a presence of divine control and authority. So it is not as if God could be divided between three parts…. Rather, each of the lordship attributes describes God as a whole. . .

Ultimately, then, fine art—art that is truly beautiful—is art that brings man face to face with God’s lordship—with his presence, with his authority, and with his control. One cannot arrive at that place without contemplating God in all of his myriad characteristics. Thus, fine art is art that causes one to consider the moral good manifested in relationship with the divine and with each other through the lenses of emotions and understanding. Such consideration necessarily says something about God’s control, authority, and presence in the lives of his creation.
This understanding of fine art allows one to firmly describe its purpose. Fine art does not set out to entertain. Instead, fine art seeks to summon one to worship, for contemplation of God’s control, authority, and presence is indeed worship. Incidentally, it is here that a good number of modern churches might find a much-needed corrective. Many modern churches seek to entertain, using art (like music) in such a way that it hints at one or two of God’s attributes but never all of them. Such art, though, fails to incite the necessary attitude of contemplation of God’s spiritual attributes. A healthy dose of fine art, as identified by that which is, truly, beautiful, might yield a true harvest.
It is a truly remarkable realization that God, the creator and controller of the universe, seeks to communicate with his creation. As Hegel would note, one avenue for this communication is the creative expression of man. When man creates art, he is creating a receptacle, an envelope, by which to deliver a message. When the message contained therein is a message from God, about God, the nature of the receptacle must, necessarily, be of sufficient quality to adequately protect and convey such a life-giving missive. Fine art encompasses the receptacles that are worthy of housing God’s messages. When we are confronted by fine art, truly moved by it, then God’s message has been fully delivered.

"The Qualities of the Dog" by Pliny the Elder