Tonight, I finally cancelled my Netflix subscription.  I just couldn’t do it anymore.  They had some content that I did enjoy.  But I kept becoming increasingly uncomfortable with the direction that they were going.  The first sign that all was not well was when they kept handing Amy Schumer bagfuls of money and even changed the review system to hide the bad reviews of her Netflix special.
I stayed with Netflix even after they released their series “Big Mouth”.  I read about how vile it was.  But I never watched it, and for the most part, Netflix didn’t try to push it on me.
Then, I learned that Netflix was working to produce a transgender cartoon.  I started to grow concerned.
I learned that Netflix had hired Barack and Michelle Obama to produce content for them, and hired Susan Rice, the woman who lied about the Benghazi incident and went on the Sunday morning news shows and tried to blame the 1st Amendment for inciting Muslims to riot.  It was growing increasingly obvious that unless something changed this was not going to end well.
But, on July 9th on the Netflix produced show “The Break with Michelle Wolfe”, Michelle Wolf had an abortion celebration.  And that’s it.  We’re done.   I just cannot live with continuing to give my money to a company that will produce a celebration of abortion.  Congratulations Netflix, you found out where the line was and you marched right over it complete with a marching band! 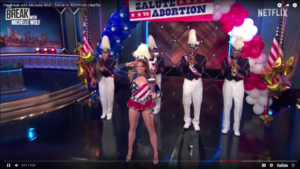 So, Goodbye Netflix.  It’s been fun.  I was a subscriber since you were a DVD only service.  But I cannot in good conscience continue to associate with a company that thinks THAT is acceptable.

The Battle of Omdurman (Part 1)