In this silly season of American politics, a common conversation is held in barbershops and forums, in person and on the web:  Who was the greatest of all American presidents? In my own opinion it’s a stupid question. You cannot possibly put yourself in a time and place and make such judgements because to do so you’d have to give up the experiences that make you who you are, and replace them with other experiences from another time.  We can judge by fruits.  Fruits of what? Fruits from whose perspective? The government? The people? Which people?  The reason I find these conversations so tedious is that for the most part they are simply people dropping the names of men they know little or nothing about, who lived in times they know little or nothing about, and held an office they know little or nothing about. Even more often, they simply say “Abraham Lincoln” or “George Washington” because they heard someone else say those names.
For the reasons stated above I cannot answer the question. I cannot tell you who the greatest President was. The question is too broad. I need a lot of criteria. But I can offer one tidbit here. I can tell you who the Greatest President You’ve Maybe Never Heard Of is:  The 22nd and 24th President of the United States, Grover Cleveland.
In defense of this, I am simply going to share some facts about the man. 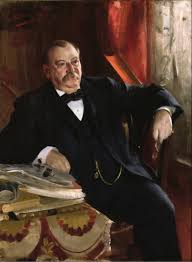 You can tell a lot about a man by the nicknames he earned. Grover served as sheriff of Erie County, New York and was nicked named The Buffalo Hangman. For reasons that should not require explaining.   Later, while he was serving as Mayor of Buffalo and Governor of New York, The New York Times frequently referred to him as “Ugly Honest” in its editorials because he so consistently told the blunt truth and refused to sugar coat anything.
Grover was a leader of a political group that called themselves the Bourbon Democrats. They were staunch economic conservatives and fought against big government and corruption in all forms. They believed in limited government and fought hard for it.
As President, Grover Cleveland vetoed more bills than all the previous twenty-one Presidents combined.
As President, Grover Cleveland vetoed more bills than all the previous twenty-one Presidents combined.
I wrote that twice. Because it’s double-awesome.
He even had something like a catch phrase. It is said that when he would veto a bill he would frequently claim, “I keep searching the document but I still cannot find the word ‘charity’ in the Constitution.”
During his second term he was diagnosed with a sarcoma in his upper jaw. The jaw had to be surgically removed and replaced with a rubber prosthetic. It was 1893, and the surgery was performed on a yacht owned by his friend. He was sedated with nitrous oxide and ether during the procedure which would have been cutting edge for the 1920s. He didn’t want the nation to be alarmed at his situation, so he told everyone it was a vacation cruise. It took a few months for him to learn to talk again, but the whole secret was maintained to the point that the public didn’t really find out until 1917, when one of the surgeons finally published a paper on the operation.
President Cleveland had the opportunity to meet a young Franklin Delano Roosevelt. The boy was only 5 years old at the time. Grover told him, “My little man, I am making a strange wish for you. It is that you may never be President of the United States.” Grover Cleveland could apparently see the future. And no doubt it appalled him. Because what FDR would go on to do… would have Grover Cleveland shouting down curses from Heaven.
Grover Cleveland was the only Democrat to win election in the decades closely following the War for Southern Independence. He won the popular vote three times, but lost the Electoral College in his reelection bid in 1888. When leaving the White House, his wife told the staff to keep everything in place because they would be back in four years. She was right. He won the election of 1892 and they were back.
Grover is the only President to ever be married in the White House. And his wife is the youngest of all the first ladies. She was just 21.  Roll Tide.
I can go on and on about Grover Cleveland. Just the fact that he could be elected Governor of New York as a Democrat just twenty years after the War should tell you what a fascinating man he must have been. Well, I guess that wouldn’t mean anything to someone living in 2015… but see, in the 1880s? No. The Democrats were the party of the South. So staunch was the Democratic control of the South that if you look at the senate 100 years later, most Southern states still had Democrat senators. 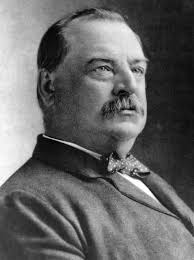 And yet here was a limited government favoring Democrat winning elections in the heart of the North.
The Greatest of All Time? It’s a silly question. But I will raise a glass to Grover Cleveland. The Bourbon Democrat. He was a president like no president before, and like none after.  I leave you with the his last words:  “I have tried so hard to do right.”
And so he did.

This Is How You Do It