We don’t think much about our calendar. It’s just there, isn’t it? But how did it get here?
The calendar most of us use is called the Gregorian Calendar. It was introduced by Pope Gregory XIII in October of 1582. It’s a solar calendar, meaning that it keeps the same date on solar events, the equinoxes and solstices. So the vernal equinox, when spring begins, is always around March 21. There are other types of calendars: Lunar calendars, like the Islamic calendar, and a combined lunisolar calendar, like the Jewish calendar.
The English-speaking world adopted the Gregorian Calendar in 1752. In 1751, the new year began on March 25, but 1752 began on January 1. Then the Julian Calendar was exchanged for the Gregorian in September of that year. You went to sleep on Wednesday, September 2, 1752 and woke up on Thursday, September 14, 1752. You can see evidence of this on Thomas Jefferson’s grave marker: 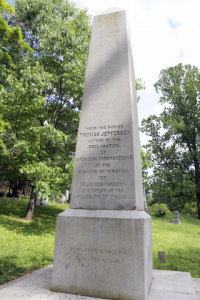 Let me call your attention to this section near the bottom:

So 2000 was a leap year, but 1900 was not and 2100 will not be. This brings the average length of the calendar year to 365.2425, closer to the length of the tropical year.
So why is it 2017? In what we now call the year 525, a monk named Dionysius Exiguus calculated the year that Jesus Christ was born. It’s safe to say he was off by four to six years, but he called that year anno Domini, “the year of the Lord” in Latin. That convention was adopted by the Church and we are now in 2017. That is where we get the abbreviation AD from. BC comes from the English abbreviation of “Before Christ.”
January 1 has been celebrated as the beginning of the new year since at least the Second Century BC. It’s unclear as to why. Of course, there were efforts to move it around, but starting with the Gregorian Calendar, it’s always been recognized as January 1.
So Happy New Year, readers. May God richly bless you in 2017.

At the Turning of a Year

Optimism For The Future