It’s been a stunning week, from the events at the G7 summit, to the historic meeting of Trump and Kim Jong-un, whom we lovingly refer to as Fatty McDictator.  Countless words are being spent to give perspective on the events, from the rational to the insane.  I thought it would be good to step back and take a moment and see things from a slightly different perspective.
Let’s try to put ourselves in Kim’s shoes.
Why is he doing this?
Do you realize what an enormous risk this is for Kim?  We in the West tend to think of a meeting with a US President as safe.  But from Kim’s perspective… well, think about it.  We killed Saddam.  We killed Khadafi.  If it weren’t for Russia, we would’ve killed Assad.  We don’t have the best track record here.
And look, Kim doesn’t have to do this.  He can stay home and safely rule his garbage kingdom for the next 60 years.  So why should he risk his life to have this meeting?  If you listen to the degenerate media, you’ll hear that he is just a troll, that he is seeking to legitimize himself… whatever that means.
Well, let us offer an alternative.  Maybe the guy is just sick of living in a shithole.  We know he was educated in Switzerland.   He knows what kind of shape his country is in compared to the rest of the world.  Unlike most of the folks in North Korea, he knows what he’s missing.
Maybe the guy is just thinking about how nice it would be if he could go down the street and get a Big Mac?  I mean McDonald’s is garbage fast food for us, but I’m pretty sure it would be an amazing feast to most North Koreans.  Give me a Whataburger franchise and a month. I’ll have this thing solved in no time. And then there is another theory I am working on.  Did you ever consider that maybe the guy just wants to be loved by his people?  Oh I know, he’s a brutal dictator.  But see, you bring up that objection like he has some choice in it.  You know how many guys are waiting around looking for a chance to shoot him in the back of the head and take his power?  That is how communist regimes work.  He has to walk a tightrope of modernizing his country while still dropping the hammer on anyone that gets jumpy.
Kim’s position here is a lot more complicated than the media would have you believe, and the man deserves some credit for the way he is handling it. 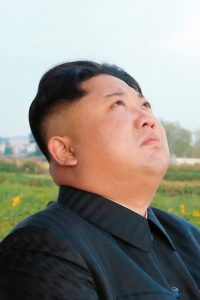