“Evil is always ultimately self-destructive …”
Indeed.
Which is one of the reasons why aligning oneself with evil is a fool’s gambit.  The “success” of evil is an illusion.  Human endeavors that displease God can only lead to the inexorable downfall of those who seek to advance them.
Therefore, it’s not wise to talk too much about the “success” of those who turn their back to God and spurn His directives, lest we fall into the mire of resentment and inaction. In fact, we should know, without any trace of uncertainty whatsoever, that it is the apparent success of evildoers which actually serves to bring about their downfall.
We can be confident that God will never allow those who use the gift of life for achieving purposes in opposition to His will to enjoy supremacy in His world.  For these people have preemptively cut off their own future by their evil acts. The life of the lawless is astoundingly and fleetingly short.
On the flip side, we, who are determined to shun any influence that might alienate us from God and who are striving to come close to Him with every deed and act of our lives, we have been assured and promised that we will inherit the earth on that future day of salvation for which we all yearn and patiently tarry.
Although the reality may certainly appear otherwise and the battle is going hard against us, we are acutely aware of a greater Reality Who will not be confounded and Who has promised to be with us when we go through the fire and when the water is raging around our necks.  God is certainly not sitting on His throne, wringing His hands, wondering what to do next, and neither should we.  Greater is He that is in you than He that is in the world. 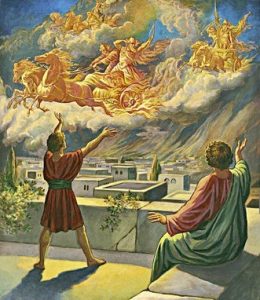 And as for those who array themselves against us to do us harm and practice evil, well … they have already set themselves up for a fall and great will be their fall.  We will look and see them no more, for . . .

Vengeance is Mine, and recompense; their foot shall slip in due time; for the day of their calamity is at hand, and the things to come hasten upon them.’ For the L-rd will judge His people and have compassion on His servants, when He sees that their power is gone, and there is no one remaining, bond or free. (cf. Deuteronomy 32)

And when the servant of the man of God arose early and went out, there was an army, surrounding the city with horses and chariots. And his servant said to him, “Alas, my master! What shall we do?”
So he answered, “Do not fear, for those who are with us are more than those who are with them.”
And Elisha prayed, and said, “Lord, I pray, open his eyes that he may see.” Then the Lord opened the eyes of the young man, and he saw. And behold, the mountain was full of horses and chariots of fire all around Elisha.  (cf. II Kings 6)

Patton's Christmas Message To His Troops