You have heard today the story from the Gospel of St. Luke of how it came to pass that our Lord Christ was born and then also the message of the angel, who announced who the boy was who was born.  Now we shall go on and take up the message of the angel.  So for today you have heard only that the child was born and that he is the Lord and Savior.  Thus we spoke of the story, how it unfolded, and who the persons in it were.  This article is so high that even today it is believed by only a few.  Nevertheless, God has preserved it even through those who have not believed it.  For at all times in the monasteries and universities there have been disputations and lectures which dealt with the fact that Christ the Lord, born of Mary, is true man and God.  But it went no further than saying and hearing it.  But this belief is held by the devil too and the Turks and all the godless among Christians, and is the kind of belief which everybody believes that it is true but would not die for it, as Eck and many others show today.  If they had as much from Christ and the teaching of the gospel as from the devil, they would also think as much of Christ. The Turk too admits that Christ was born of the Virgin Mary, that Mary was an immaculate virgin, and that Christ was more than a man; but the Word of God, as it is given in the gospel, he denies, and yet I fear that the Turk believes more of this article than does the pope.  Therefore it is a high article to believe that this infant, born of Mary, is true God; for nobody’s reason can ever accept the fact that he who created heaven and earth and is adored by angels was born of a virgin.  That is the article.  Nobody believes it except he who also knows this faith, namely, that this child is the Lord and Savior.
But for whom was he born and whose Lord and Savior is he?  The angels declare that he was born Lord and Savior.  The Turks, the pope, and the scholars say the same thing, but only to the extent that it brings in money and honor.  But that anyone could say, “to you is born,” as the angel says, this is the faith which we must preach about.  But we cannot preach about it as we would like to do.  Indeed, who could ever grasp [the full meaning of] these words of the evangelist: “a Savior, who is the Lord,” and, “to you”!  I know well enough how to talk about it and what to believe about it, just as others do.  So there are many who have this belief and do it, just as others do.  So there are many who have this belief and do not doubt this first belief that Christ is the Lord, the Savior, and the virgin’s Son.  This I too have never doubted.  But if these words are planted no higher than my thoughts, then they have no firm roots.  We are certain that this was proclaimed by the angel, but the firm faith does not follow.  For the reason does not understand both sides of this faith, first that Christ is a man, but also the Savior and Lord or King.  This needs to be revealed from heaven.  One who really has the first faith also has the other.
Who, then, are those to whom this joyful news is to be proclaimed?  Those who are faint-hearted and feel the burden of their sins, like the shepherds, to whom the angels proclaim the message, letting the great lords in Jerusalem, who do not accept it, go on sleeping.  Beyond the first faith there must be the second faith, that Christ is not only the virgin’s Son, but also the Lord of angels and the Savior of men.  The words anyone can understand, antisacramentarians, fanatics, sectarians, and Turks; but they do not proceed from the heart they come only from hearing and go no farther than hearing.  This is not faith, however, but only a memory of what has been heard, that one knows that he has heard it.  Nobody ventures upon it, so as to stake goods, life, and honor upon it.  And yet we must preach it for the sake of those who are in the multitude to whom the angel preached. 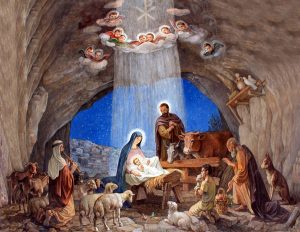 John Wayne – America, Why I Love Her