In the beginning, it was God Who created. The Hebrew word translated ‘in the beginning’ is ‘bereshit’ and proclaims that nothing existed prior to God’s act of creation, and that the heavens and the earth were created only through God’s Word. This is also affirmed elsewhere in Scripture:

The Scripture teaches us that the world was brought into existence from non-existence i.e. ex nihilo. The belief that the world is eternal is, according to the Sages, not only a metaphysical falsehood and a misrepresentation of the origin of the universe, it is a belief which serves to undermine all of morality, while denying freedom in both God and man. 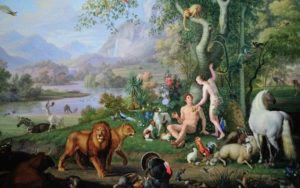 If matter existed before creation, then the Creator of the universe would have been able to fashion from the material given Him not a world that was absolutely good, but only the best possible world within the limitations of that material. God would then not be master over the material of the world, and man would not be master over his body. Freedom would disappear, and the entire world would be subject to a blind, immutable fate.
Everything was created by the free, Almighty Creator, a Creator Who still rules freely over matter; over the forces that act upon matter; over the laws by which these forces operate; and over the resulting forms. The free and Almighty will of God created matter and caused these forces to act upon it, and His will set the laws by which forms are fashioned. And so the world that has been created is not the best possible one that can be fashioned with the given material; rather it is the only good world and is a world which reflects the wisdom of the Creator.
The possibility of sinning is part of moral perfection and a basic condition for moral freedom. We see then that ‘bereshit’ is the foundation of our awareness of God, world, and man. When man lost this awareness, it had to be reestablished. This, then, was the purpose of the revealed miracles: to demonstrate God’s free and unbounded mastery over the world with all its elements forces and laws. According to our Sages, these miracles were intended to restore man’s faith in a free and unlimited God.
Paganism, on the other hand,  fragments the whole world into many groups and spheres (e.g. gods of Greece and Rome, the Hindus, et al). At the head of each sphere stands a god who has been bestowed with certain powers. This misguided and erroneous idea lowers the concept of god and transforms the god into a natural power who is bound and limited in the act of creating. Such a god is unable to create true contrasts and differing phenomena, therefore, the world would have to have been established by many gods – as many as there are groups of opposing phenomena.
The Scriptures deny the existence of these numerous gods and ascribes the powers that are attributed to them to the one and only God.  He alone is called Elohim. All the attributes of power that were separated by paganism are united in Him. The unification of these attributes raises the one God above any notion of a mere natural power. For only the free and omnipotent Will of a single Being can create a world of contrasts; and only He can unite these contrasts into one great purpose.
Elohim is also a Name that signifies God’s relationship between God and the world.  God Who reveals Himself today as the Master of the universe is the One Who created the world through His Will and Almighty power. The Scripture gives expression to the complete objectivity of the creation. Scripture thus discredits those who try to argue that God is immersed in the world – as though He were the world’s mind and soul, thus lowering God to the level of a force of nature, which has no existence beyond the world.
This is simply not true. Since after God created the world and all its parts, He looked at them again. Consequently, this demonstrates that the work is external to its Creator, and that God is outside the world. God ‘barah,’ created, His world giving it external existence and His thoughts physical objectivity. The world is related to God, not as the body is related to the soul, not as the organism is related to the life-force, but as a work is related to its maker.
In other words, God transcends His world absolutely and His work remains forever dependent upon Him, whereas He is independent of His work. The Scriptures testify that God looks upon His work and finds it good, and only because He looks upon it and only for as long as He looks upon it does it continue to exist. To put it simply, the world is in its entirety is nothing more and nothing less than the materialized thought of God Who brought everything into existence with the words, “Let there be.”…and there was.
The Son is the image of the invisible God, the firstborn over all creation. For in him all things were created: things in heaven and on earth, visible and invisible, whether thrones or powers or rulers or authorities; all things have been created through him and for him. He is before all things, and in him all things hold together . . . (cf. Colossians 1).

Marxism Hates the Past