As stated in the inaugural post to this series, the plan here is simple: The books are selected as I deem fit. I will take requests, but this isn’t an academic exercise, nor is it a curriculum. These posts are introductions, meant for people who aren’t well grounded in literature. Some will be brief, like this one, others may be more in-depth. But the goal of this series is to get you reading the books, not my take on the books. 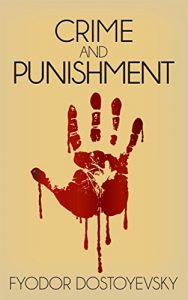 It’s kind of amusing to me to pick Dostoevsky to begin. At first I considered going back to the Greeks or Romans, or perhaps Chaucer or Shakespeare, but this is my series and it’s best to write whatever the hell I want, when I want. Russian literature is only on the fringes of the West. However, Crime and Punishment is one of the key Russian books which has had immense influence on Western culture since it was published ~170 years ago. Crime and Punishment is the story of Rodion Raskolnikov, an ex-law-student who becomes something of a sperg about his bizarre philosophy. If you’ve read up on the sociosexual hierarchy, Raskolnikov is a hardcore Gamma male with delusions of Alpha. He believes himself to be a secret king–indeed at one point he compares himself to Napoleon–someone above the law, who can literally get away with murder. And that’s how the book begins. Raskolnikov decides to pawn off some of his belongings to pay the bills, and in so doing meets a pawnbroker who is a horrible human being in her own right. Raskolnikov then begins plotting her murder, and carries out the deed with an axe, then steals everything of value. At first he plans to use this treasure to get himself situated and then perform good and noble deeds, but ends up tortured by the horrible things he’s done. Then, of course, the police get involved. Now, I’m not going to spoil the story for any of you, but the themes of Crime and Punishment are: guilt, torment, redemption, love. Dostoevsky was a Christian man who had done many horrible things in his own life, committed many grievous sins, but he had a conscience and throughout his life was both tortured by that and relieved by the love of God. This kind of cycle plays out through many of his works. But why does Crime and Punishment matter, specifically? It was one of the first important books to plumb the depths of psychology and sociology  using those then-new sciences, as they were understood back in the 1860s, but did so without losing faith. You must understand, in Pre-Revolutionary Russia, some guy named Marx was starting to grow in popularity, and everyone in the intelligentsia was tossed about by every wind of doctrine–so long as it had some kind of materialist bent to it (sounds familiar, doesn’t it?) Now, Crime and Punishment is hardly Dostoevsky’s best work, nor is it my favorite. But it is probably the most approachable for most people who aren’t well grounded in literature. We’ll tackle something like Brothers Karamazov or The Idiot much later in this series. As a parting note, here is a link to my favorite translation of Crime and Punishment. It is an affiliate link so I might get a couple pennies. But I recommend Pevear and Volokhonsky’s translations of all of Dostoevsky’s works because they are approachable and modern, without losing the Russian sensibility.
Share this

Video: Violence In The Old Testament