The whole Roy Moore fiasco has turned into a full blown knock down drag out fight.  Everybody knows that Mitch McConnell really wanted Luther Strange to keep that Senate seat.  And the ensuing politics has gotten dirty.  We have had just about every member of the Senate GOP caucus line up to withdraw their support from Roy Moore and lecture us on the high ethical standard that one must maintain in order to be a United States Senator.  Please, hold your laughter.  Even if every rotten story that has come out about Roy Moore is true, that would only make him about as moral as about everybody in the Senate not named Rand Paul. 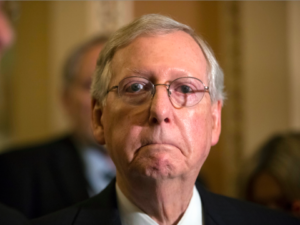 Exhibit A.  The Republican Caucus has not repealed Obamacare.  There’s no way to say this but matter of factly.  We do not care what any Republican member of the United States Senate thinks as long as Obamacare continues to be a menace to this nation.  The Republicans gave their solemn vow that it would be repealed.  And when they had the opportunity, they did not do it.  As far as we are concerned, that makes every single member of the Republican Senatorial Caucus a liar.   Until Obamacare is repealed, you all have such black marks on your dignity and reputation we don’t want to hear not a peep out of any of you.  Keep your promises, and keep the promise that you shouted from the rooftops for 7 years first.  Then, once you have shown yourselves to be men of your word, then, maybe, you’ll have room to talk about the ethics one has to maintain to be a Senator.
Exhibit B.  Ted Kennedy.  I don’t need to say anymore because Boethius already did.  Go read his article if you haven’t already.
Exhibit C.  Bob Menendez.  Mitch McConnell has spent a lot of his breath blathering on about not seating Roy Moore if he wins the election.  But, what has Mitch McConnell done about Bob Menendez, a man who has actually been brought to trial for corruption and bribery and is a known associate of convicted pedophile Jeffrey Epstein.   McConnell has done nothing.  Not a thing.  The accusations against Menendez, and the association he has with Epstein, are worse than anything Roy Moore has ever been accused of.  But Menendez continues to be an honored member of the United States Senate.
Exhibit D.  Elizabeth Warren.  Donald Trump made fun of her most well known ethical lapse, claiming to be an American Indian when as far as anybody can tell, she has not a drop of Native American blood in her veins.  And she has repeatedly declined to release any information that would back up her claims to Indian Ancestry.  That… is fraud.  And the accusation that Elizabeth Warren fraudulently took a teaching position reserved for a minority is a serious one.  One that should deeply concern Mitch McConnell and his buddies who are so concerned about the honor and the integrity of the Senate.
Exhibit E.  Harry Reid, the former Senate Majority Leader, not only was embroiled in a real estate scandal in his home state of Nevada, but also slandered Mitt Romney on the floor of the Senate, falsely claiming that Romney had not paid his taxes.  (as an aside, since Mitt Romney has gone on the record that serious allegations are all it takes to disqualify one from office, we would like to know why he didn’t immediately drop out of the Presidential Race when Harry Reid made these accusations, and why the IRS hasn’t thrown him in jail.  We won’t hold our breath).
Exhibit F.  The Miguel Estrada Affair.  In 2001, George W. Bush nominated Miguel Estrada to the Federal Judiciary.  He was filibustered by Senate Democrats.  Republican staff members found on a computer that Democrat staff members had left logged on documents that showed that the Democrats were filibustering him solely because they wanted to be the party to nominate the first Hispanic judge to the Supreme Court.  Rather than publish these documents, the Republicans promptly returned them to the Democrats, and Estrada eventually withdrew his nomination.  Honor of the Senate… yeah right.
Exhibit G.  Obamacare.  We got Obamacare through the use of the Senate budget reconciliation process, even though such bills needed to originate in the House, and Obamacare really wasn’t a budget bill.  The lies and deceit it took to get that bill through the Senate should shame them all.  And yet, we are lectured about the Integrity of the Senate.
And we could go on and on and on.  But the point is made.  The Republicans are feckless cowards and the Senate doesn’t have any honor or integrity left in it.  How about instead of inserting yourselves into local politics because you don’t like the guy Alabama might elect, instead, you try keeping your promises for once?

Update:  This came out this morning.  Al Franken groping a woman while she sleeps.  What is the Fearless Leader of the Republican Senatorial Caucus going to do?  Surely this is not behavior that befits a United States Senator, right? 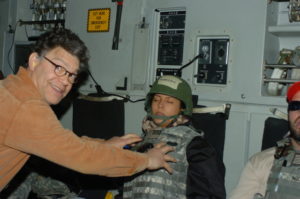