Editor’s Note: Our own Lector had the chance to interview Rolf Nelson, the author of some of the best Science Fiction that has been produced in the past five years. You can read his original version of The Stars Came Back here (it is in screenplay format). If you would prefer the novelization of that story, part one is available  here, with part two coming out in a few months.  His latest novel, The Heretics of St. Possenti, set in that same universe was just released by Castalia House, and you should go get it right now. Yes, it is that good.  You can also visit his website.
In the interview, Rolf provides some insight into his motivations, influences, and philosophy.

You originally wrote The Stars Came Back as a screenplay. How hard was it to rewrite it as a novel?
Not that hard. I spent time rewriting the screenplay into ordinary prose format, and of course I read a lot so I’ve seen a great deal of it. So it’s different, but not really harder or easier.
Are we supposed to have a crush on the armadillo?  because I totally have a crush on the dillo.
That’s just weird. 🙂
Seriously, though, I tried to write the AI as a little flaky, but also as a serious, tragic, and somewhat lost soul. She’s doomed to a life of killing and watching friends die, and to no obvious purpose. The redemption of finding something, and someone, worth fighting for, and eventually the fight to save humanity, will make it worth the price, though. Not sure if “crush” is the right term, but appreciating her is a good thing. Certainly getting on her bad side isn’t good for your odds of survival.
What was your original inspiration for the Order of Saint Possenti?
Not sure. It was a while ago. I needed something that was a bit mystical, but not actually magical, and connected to this reality. Some sort of indication that the AI was one of the “good guys.”
In your writing the firearms related stuff is always accurate. There are no sloppy mistakes. Do you shoot regularly and what do you enjoy shooting the most?
At one time I was a NRA certified firearms instructor. I grew up in Alaska, where guns are a fact of life, and I’ve always liked military history and jargon. I found I really hated bad gun terminology in the news, in movies, and elsewhere; it bugged me much more than it likely should. So, I made it a point to always make my action scenes as technically realistic as I could, both for authenticity, and as an educational tool (I’m a teacher, so it comes with the territory). I don’t shoot as regularly as I’d like. I hunt deer most years, and target shoot from time to time. What I do every year is go to shoot at Boomershoot, where we mix explosive targets that are impact sensitive and shoot at them, either “high-intensity at ~25 yards (or “entertainingly close”, look up the video), or else with rifles at 375 to 700 yards. A long-time friend of mine, Joe Huffman, puts it on each year. I help out.
In your storytelling how do you decide what scene goes where in terms of storytelling? How do you decide what perspective to use to move the plot along?
I think visually. I imagine what a scene would look like. I sort of “game it out,” in terms of what’s necessary for a scene to be plausible, and how an intelligent bad guy would react, and then the intelligent main character re-react. You can’t suddenly “find” the +5 Vorpal Sword of Dragon Slaying five minutes before you have to face the dragon – that’s just not good story-telling. You need to discover it long ago, or make it, or be stuck carrying it around (and having it get in the way) for a hundred pages before you use it. To the plot takes as long as it takes, while I add features and events I discover I need – that’s how a 20k word screen play morphed into a 165k word novel. 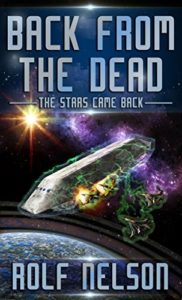 In the past you’ve said that with The Stars Came Back you just had to write it. Like it was a story in your head that you just had to get out. Was Heretics the same way?
Not at all. It was more a small question, and a very small number of vocal proponents saying “this is A STORY!” that piqued my interest to the point where I was pondering: “Yes, how exactly DOES this happen?” I started gaming it out – what sort of person, what sort of events, how would they connect, how would the higher-ups feel about it, who would react badly, how would it support itself? Once you start to get an idea sketched out, I had to do research to see if it were plausible, or doable. Along the way I learned a lot about various aspects of the Church, and that altered the plot line more than a little bit. I still realize I know much less than I should about such a venerable institution.
There is an obvious Firefly feeling to Back from the Dead. What are your major Sci fi influences?
Heinlein, Hogan, Anne McCaffrey, Asprin, Pournell, Nivin, Piper, Weber, Foster, Anthony, Harrison, Wells, Verne, Tolkien, Laumer, Vinge, Adams, Stirling, Anderson, Dickson, off the top of my head. Star Trek, Star Wars (ep 4, 5, 6 only), Tremors, Alien, Firefly, Conan, TRON, Back To The Future, Brazil, Predator, Gattaca, Battlestar Galactica, Escape from New York, Big Trouble in Little China, Soldier, Robocop, Galaxy Quest, Terminator. Some of the other “obvious” big names didn’t make nearly as much impression on me, though I did feel compelled to have a 2001 HAL “Easter Egg” reference.
There have been a lot of comments about how your writing is improving in terms of craft. Does it feel like you’re getting better at this?
A little bit, but it doesn’t feel like leaps and bounds, just… constant minor adjustments.
Last question…
Harbin vs Lag.. one on one in the octagon. Who wins?
The audience. Even a “show fight” between them would be awesome.
Harbin is more tactical. Lag is more strategic.
I sort of answer that in the last book of the series, tentatively titled “Cosmic Arena.” Yes, they are going to both be in the arena. Just have to wait and see. Let’s just say that there are an awful lot of losers by the end of things.

The Moral Bankruptcy of the United States Senate