The continous faux-moral outrage of the Democrats is something of a wonder.

On one hand, they are falling over themselves as they accept every accusation thrown at Roy Moore. It doesn’t matter how tenuous or vague, they lap it up like it’s ambrosia.

On the other hand, Ted Kennedy was in the Senate for forty years.

Edward “Ted” Kennedy was a monster of such little humanity about him, his residence in Hell was secured long before most of us were born.

Let’s review just what type of horrible waste of oxygen Ted was. 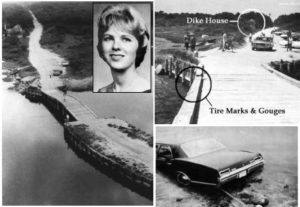 On leaving a party, drunk, in his Oldsmobile with Mary Jo Kopechne. He crashed the car off a bridge and into a pond. The bastard survived, went to his room at the Shiretown Inn, slept off his bender.

He didn’t report the accident for ten hours.

Allegedly, he and two others had made two attempts to save Mary Jo, to no avail. The others insisted that Ted report the accident. He assured them he would, according to official testimony, but asked them not to tell anyone else.

And here’s were the moral monster showed his true colors: “[b]ecause I felt strongly that if these girls were notified that an accident had taken place and Mary Jo had, in fact, drowned, that it would only be a matter of seconds before all of those girls, who were long and dear friends of Mary Jo’s, would go to the scene of the accident and enter the water with, I felt, a good chance that some serious mishap might have occurred to any one of them.”

Get that? He wanted to keep it hushed because, in his drunken and frenzied state, he was only thinking of others. This is classic deflection. He lied by omission and covered it up by climbing up on

his imaginary high horse and placed the blame on complete innocents.

Kennedy was brought to court and plead guilty to leaving the scene of crash and causing injury, His punishment for killing Mary Jo? Two months jail time, which the Judge suspended.

Kennedy went on to serve in the US Senate, leading a life of corruption and sin, for decades, fighting to destroy America. The so-called “Lion of the Senate” made a career of undermining the West and pandering to anyone in order to get his brimstone-reeking agenda pushed forward, inch by inch, bill by bill.

To this day, the Democrats laud this vile excuse for a human being.

So pardon me if I don’t care what these cretins claim is moral or not.

They lost any sort of high ground when their morally-bankrupt Lion let a innocent girl drown.

The Life Of Whitey

The Moral Bankruptcy of the United States Senate